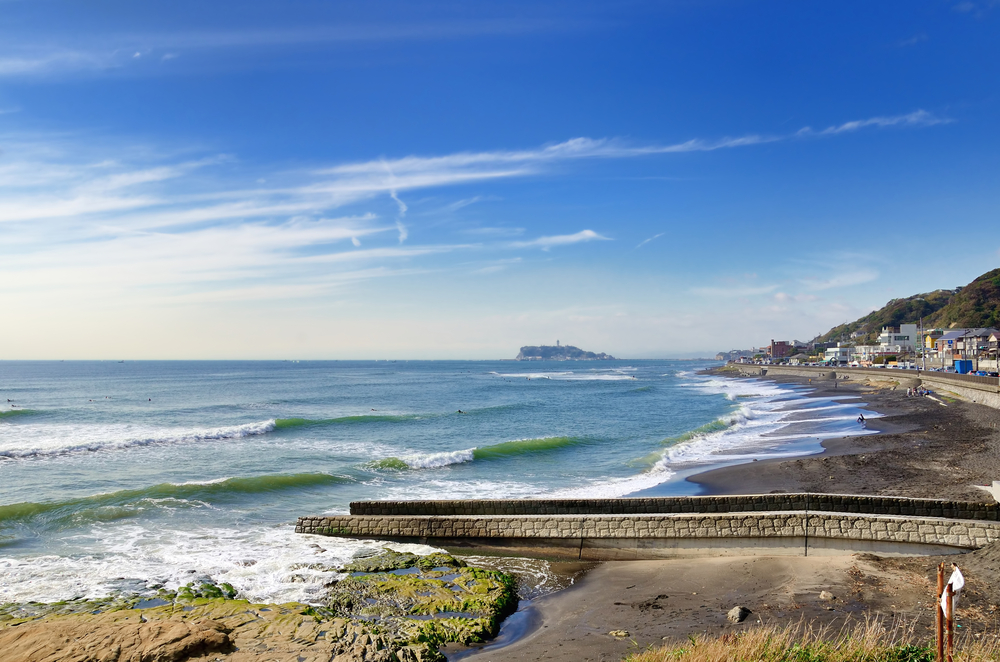 As a seaside Japanese city by south of Tokyo, Kamakura was the political center of ancient Japan and is now a popular resort town filled with Buddhist temples and Shinto shrines.  The most distinctive landmark is the Kotoku-in Temple’s Great Buddha, a bronze statue of 13m tall standing since the 15th century tsunami.  Yuigahama Beach on Sagami bay is well know for surfing activity. 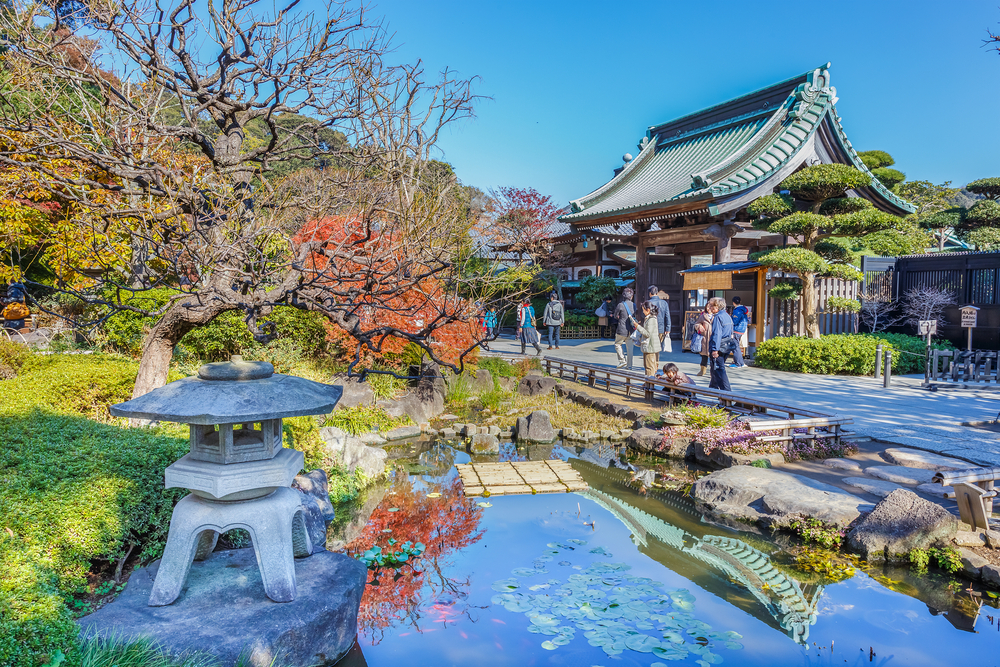 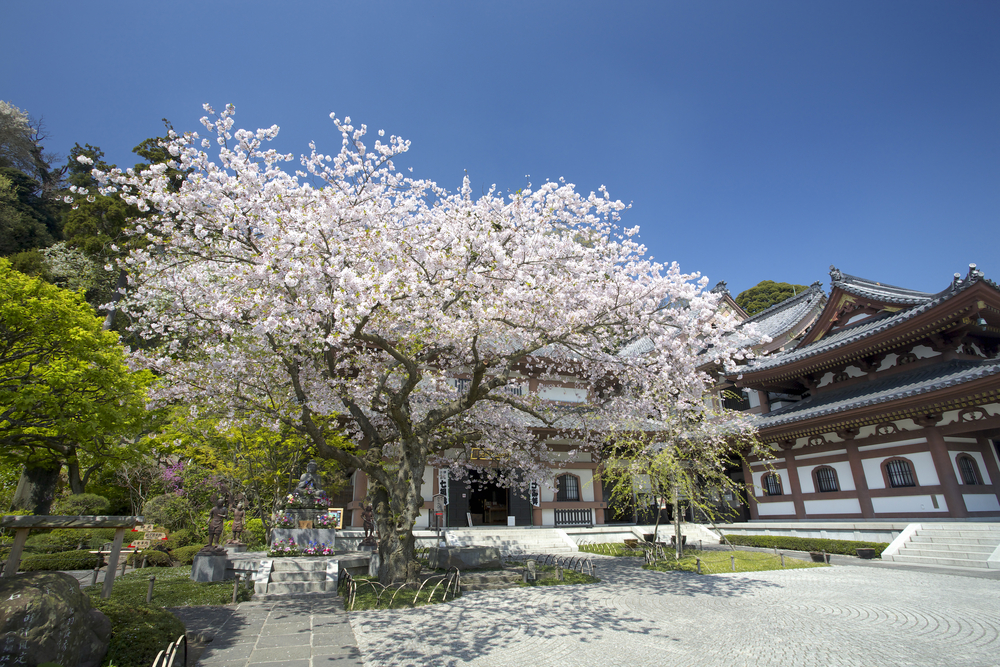 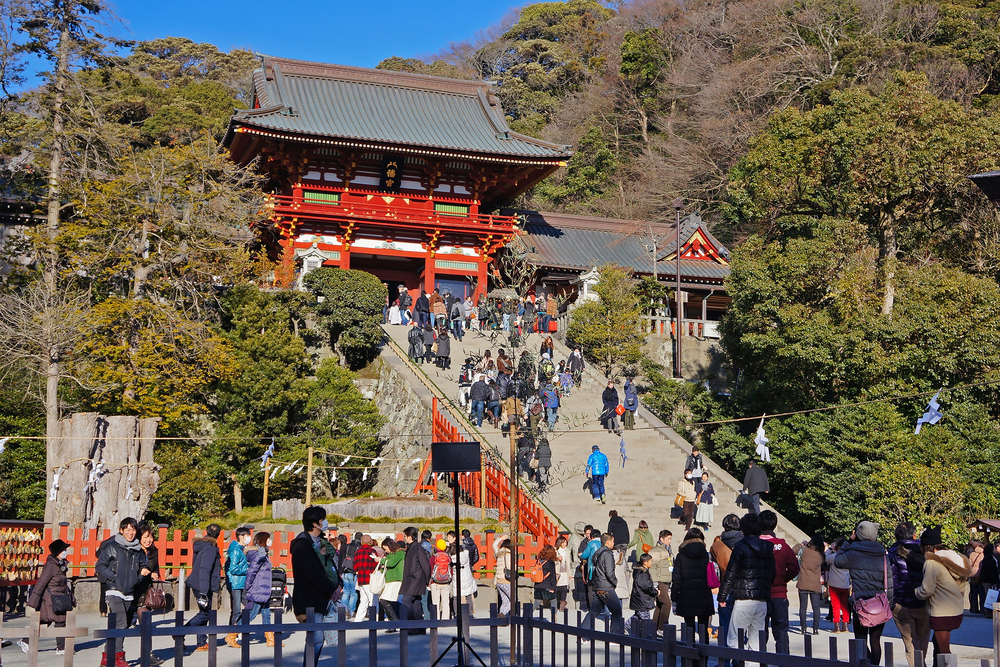 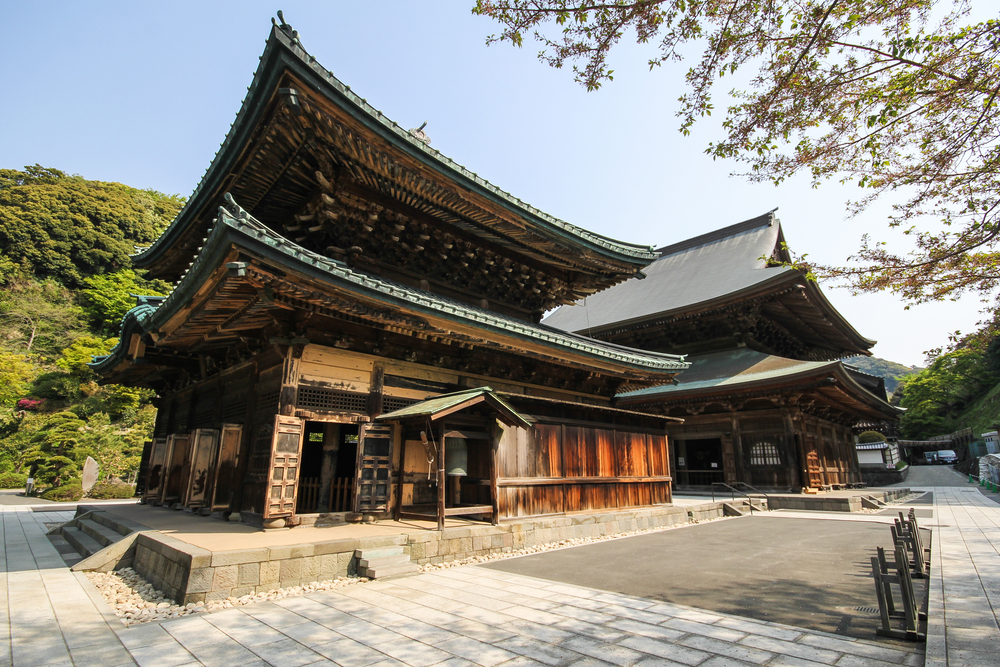 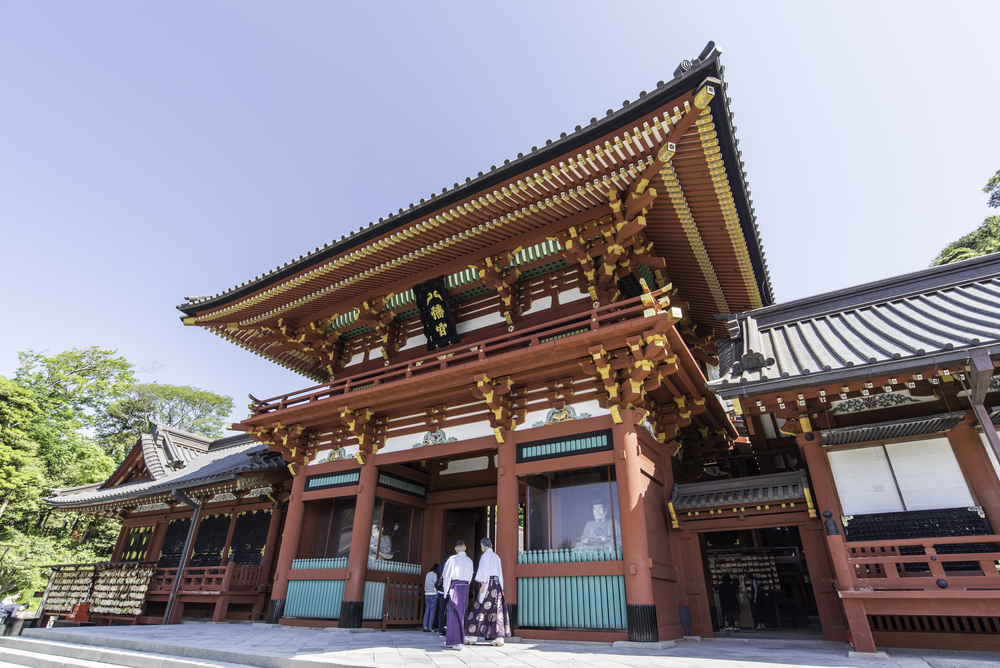 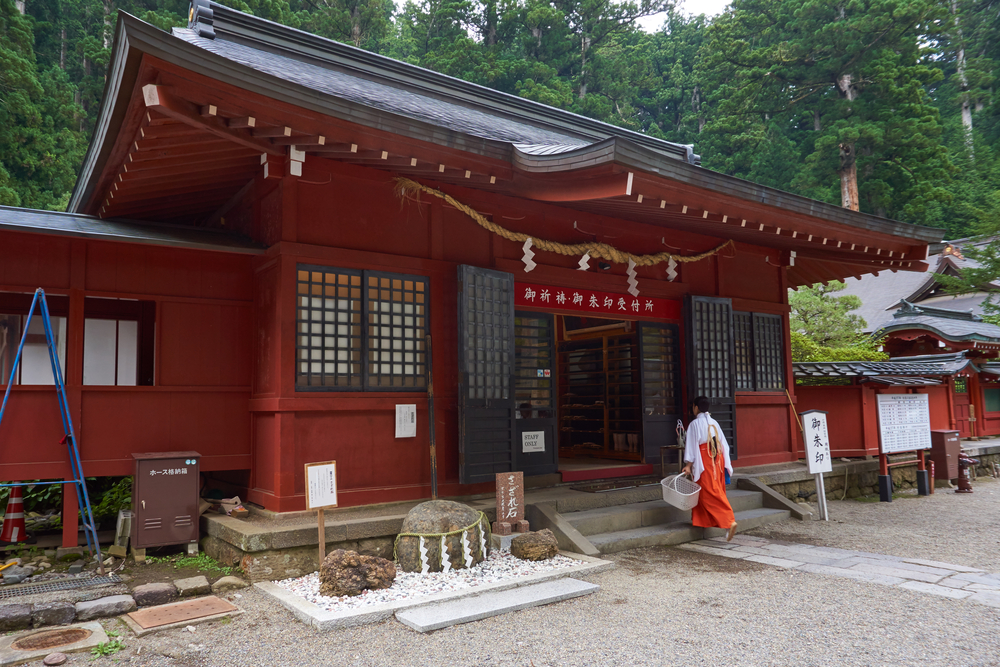 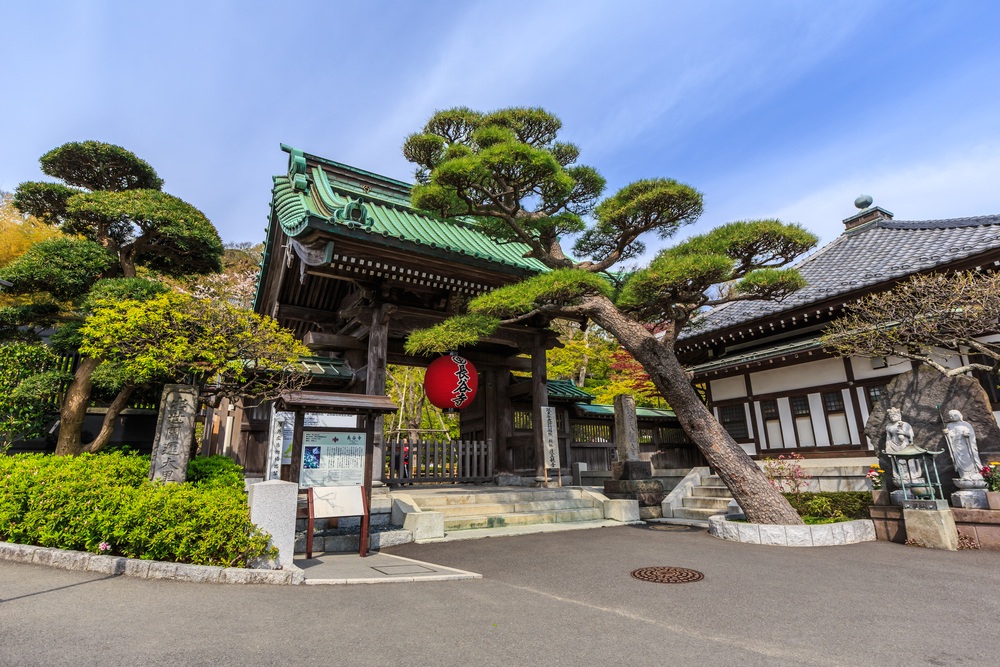 KAMAKURA, JAPAN – APR 13: Front gate of Hase-dera temple on Apr 13, 2014 in Japan. is one of the great Buddhist temples in the city of Kamakura, famous for housing a massive wooden statue of Kannon.  (Tooykrub / Shutterstock) 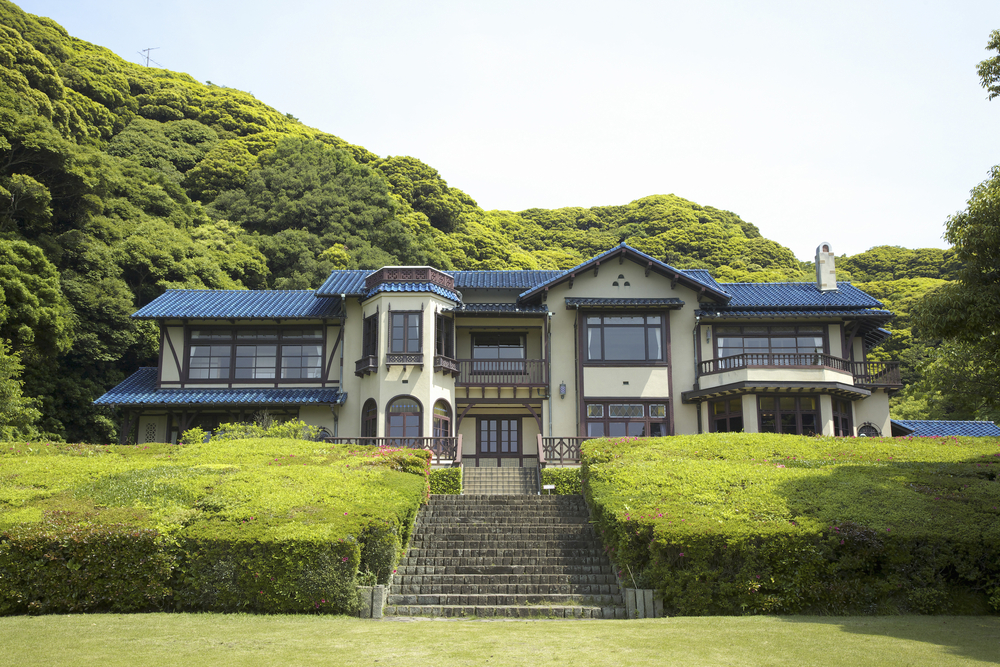 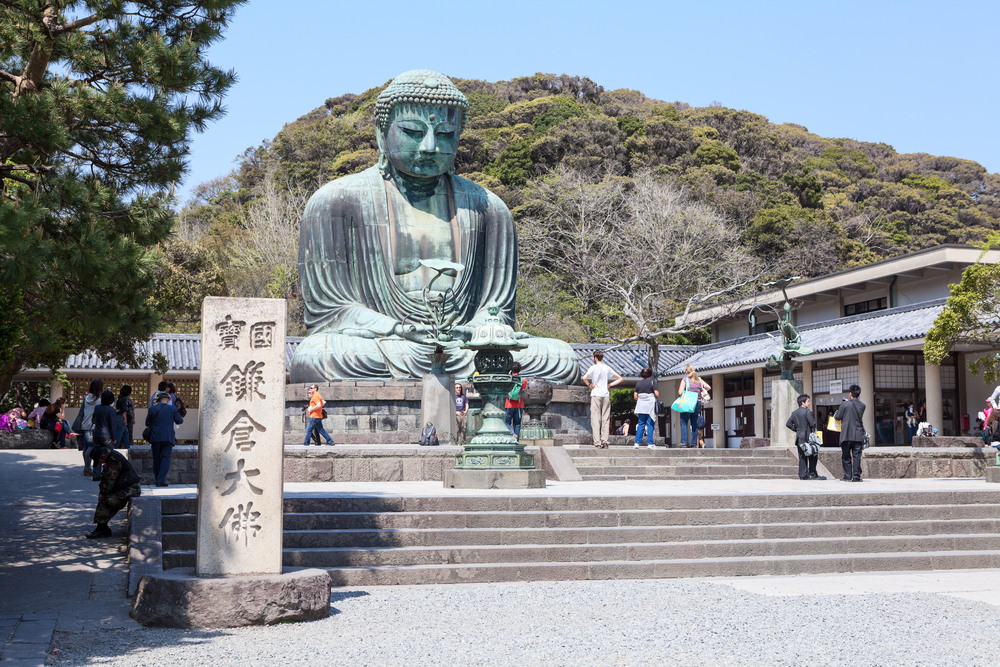 KAMAKURA, JAPAN – CIRCA APR, 2013: The Great Buddha is in the city of Kamakura in Kanagawa Prefecture, Japan. Seated Buddha Amida Nyorai, or Daibutsu  (Kekyalyaynen / Shutterstock) 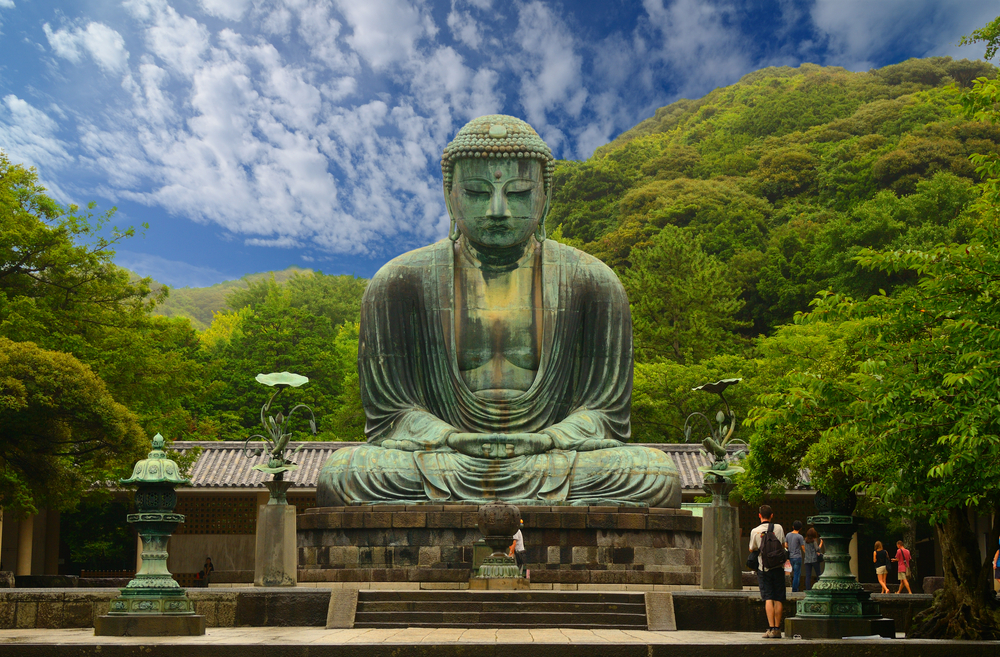 The Great Buddha (Daibutsu) on the grounds of Kotokuin Temple in Kamakura, Japan.  (Copyright: Sean Pavone) 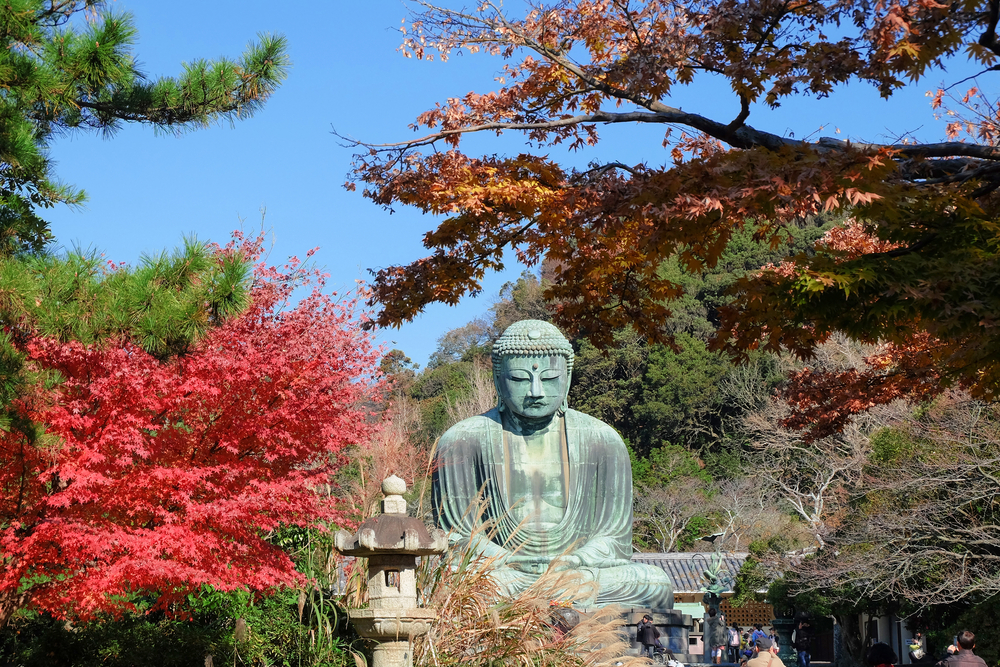 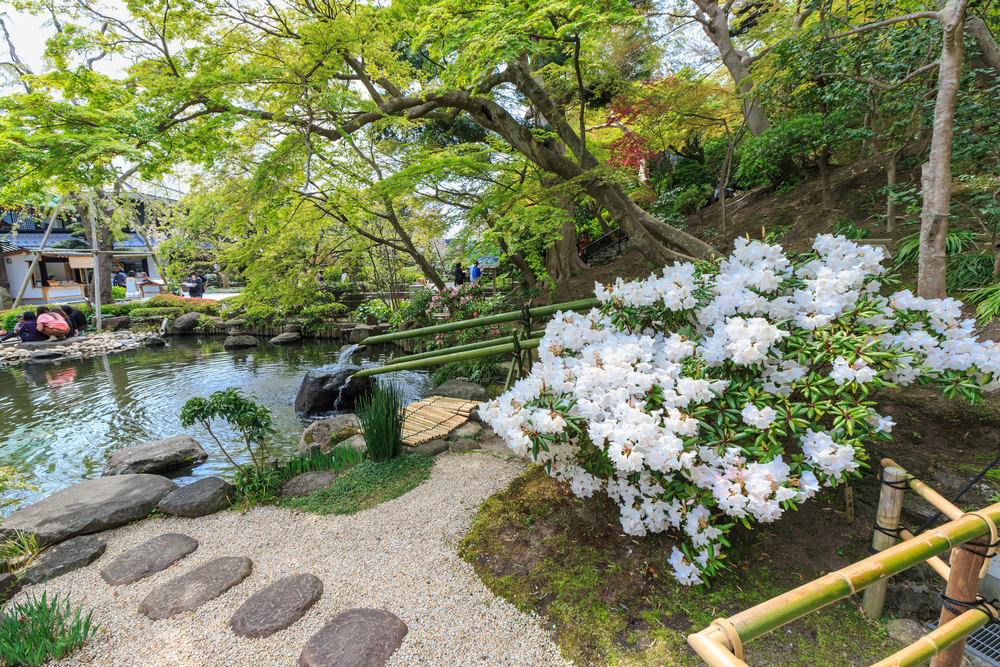 KAMAKURA, JAPAN – APR 13: Zen garden at Hase-dera temple on Apr 13, 2014 in Japan. It’s one of the great Buddhist temples in the city of Kamakura, famous for housing a massive wooden statue of Kannon.  (Tooykrub / Shutterstock) 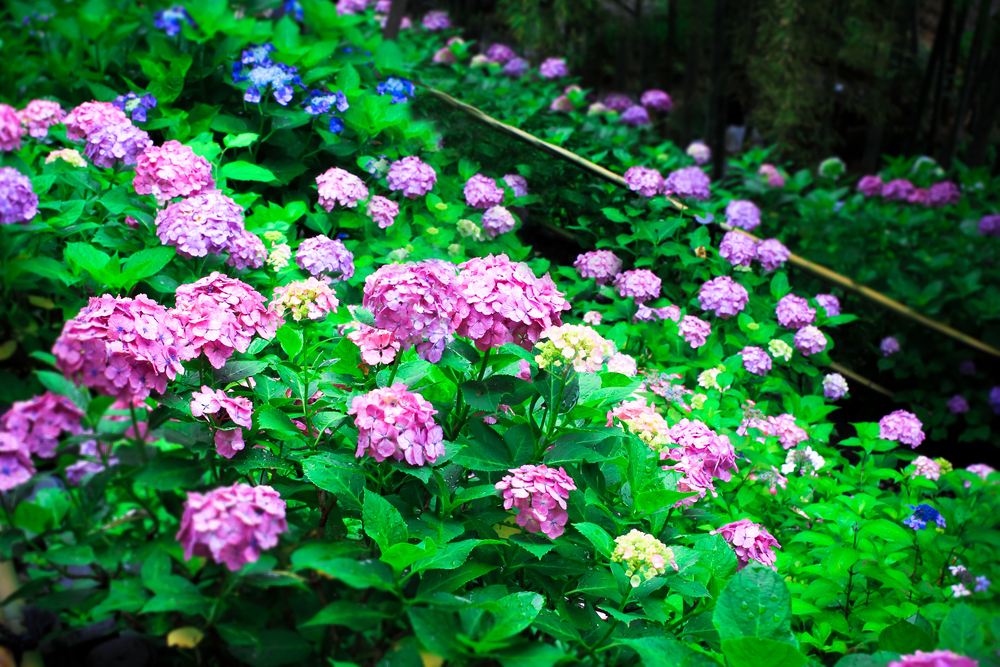 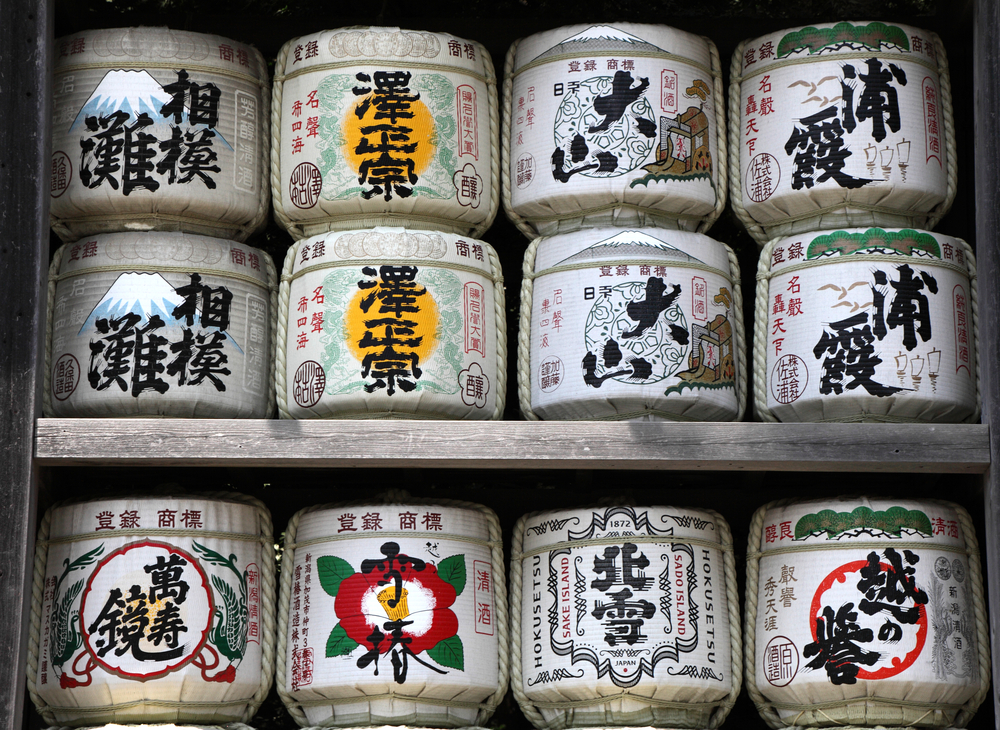 KAMAKURA, JAPAN – AUGUST 5, 2015: Stack of Japanese wine (sake) barrels at a shrine on August 5, 2015 in Kamakura, Japan. Japanese donate wine to the temples and shrines as offering for the Gods.  (mary416 / Shutterstock) 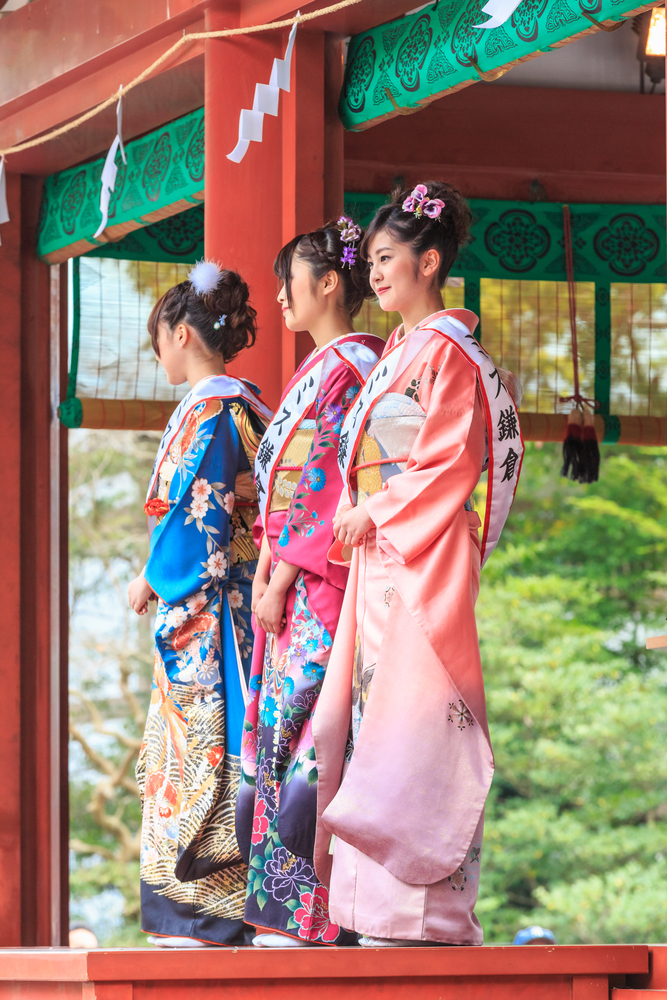 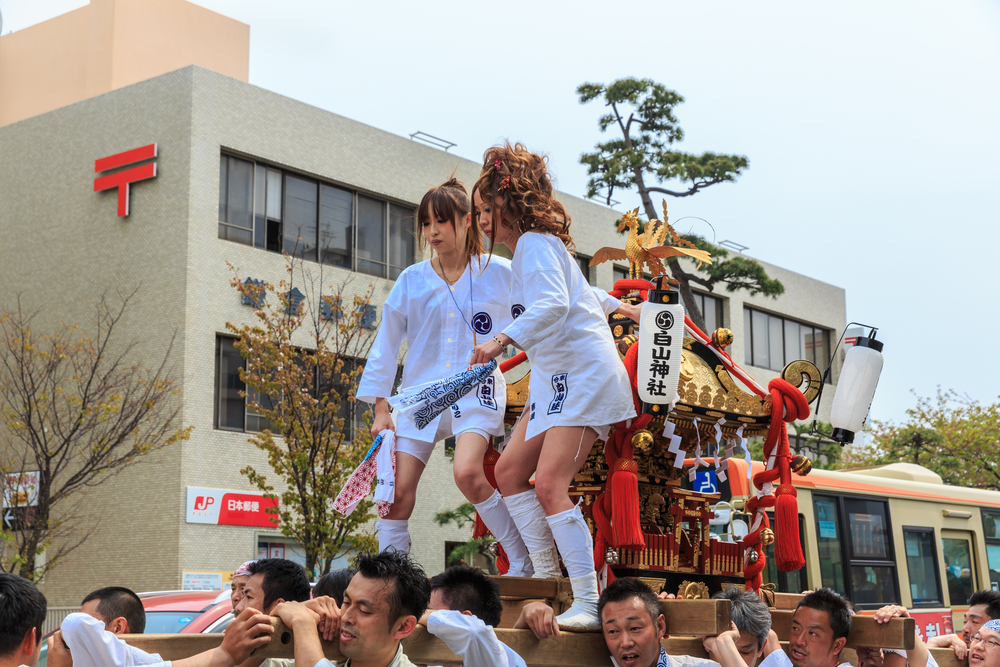 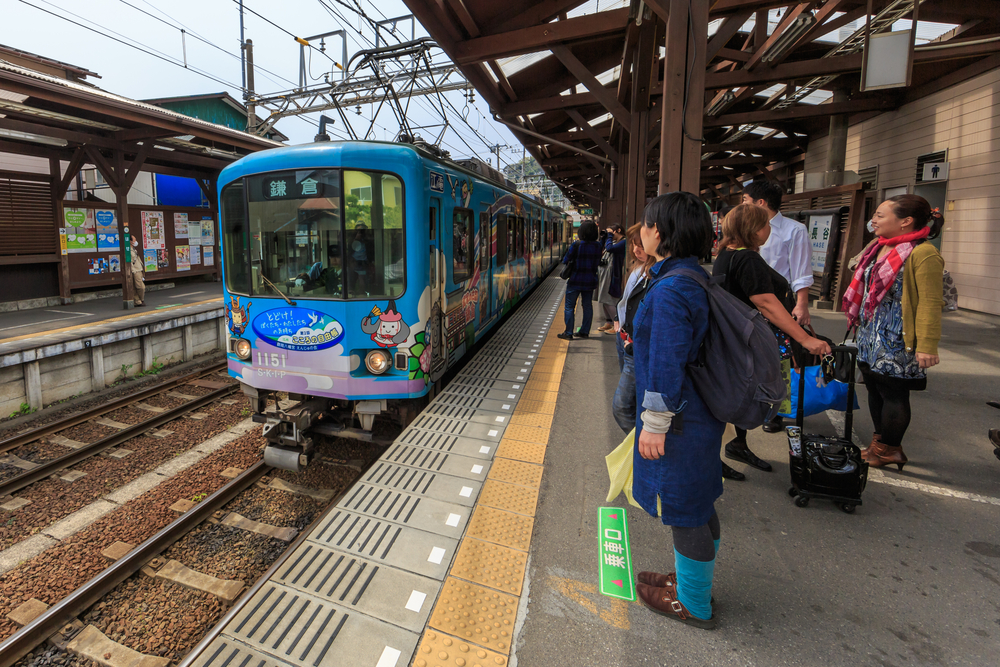 KAMAKURA, JAPAN – APR 13: Travellers at Hase station on Apr 13, 2014 in Japan. It is a railway station on the Enoshima Electric Railway (Enoden) located in Kamakura, Japan  (Tooykrub / Shutterstock) 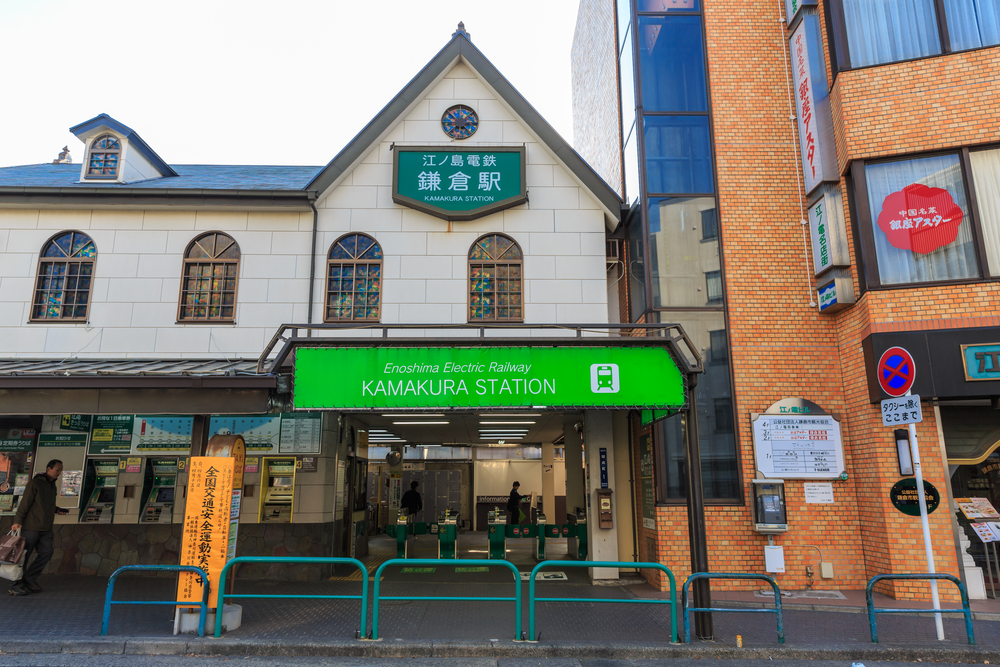 KAMAKURA, JAPAN – APR 13: Hase station on Apr 13, 2014 in Japan. It is a railway station on the Enoshima Electric Railway (Enoden) located in Kamakura, Japan.  (Tooykrub / Shutterstock) 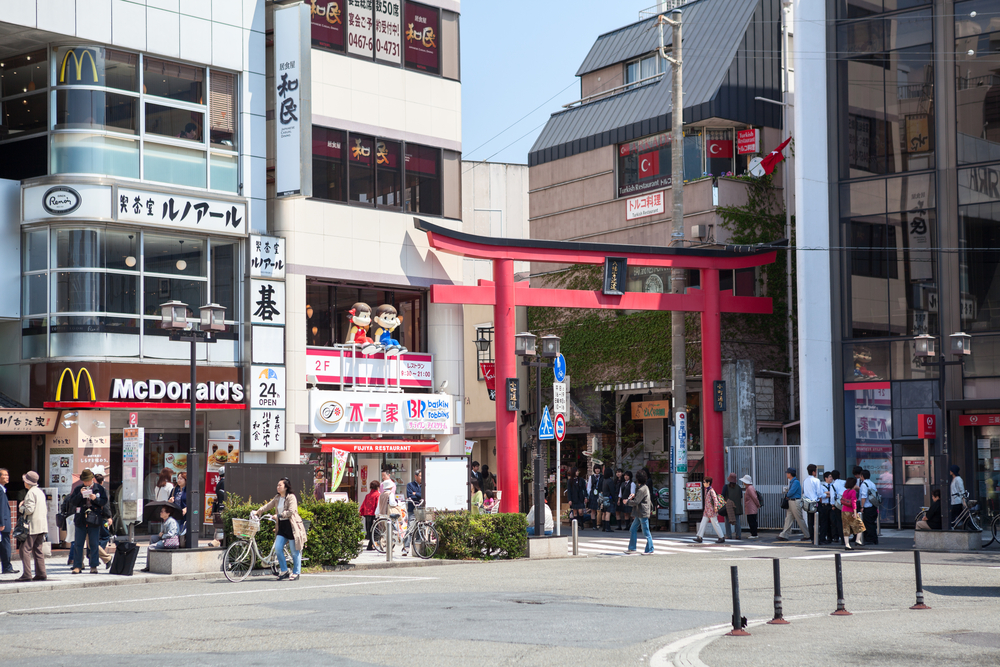 KAMAKURA, JAPAN-Circa APR, 2013: Torii at the entrance of shopping town is near the rail station square of the city. The Kamakura is a city in Kanagawa Prefecture  (Kekyalyaynen / Shutterstock) 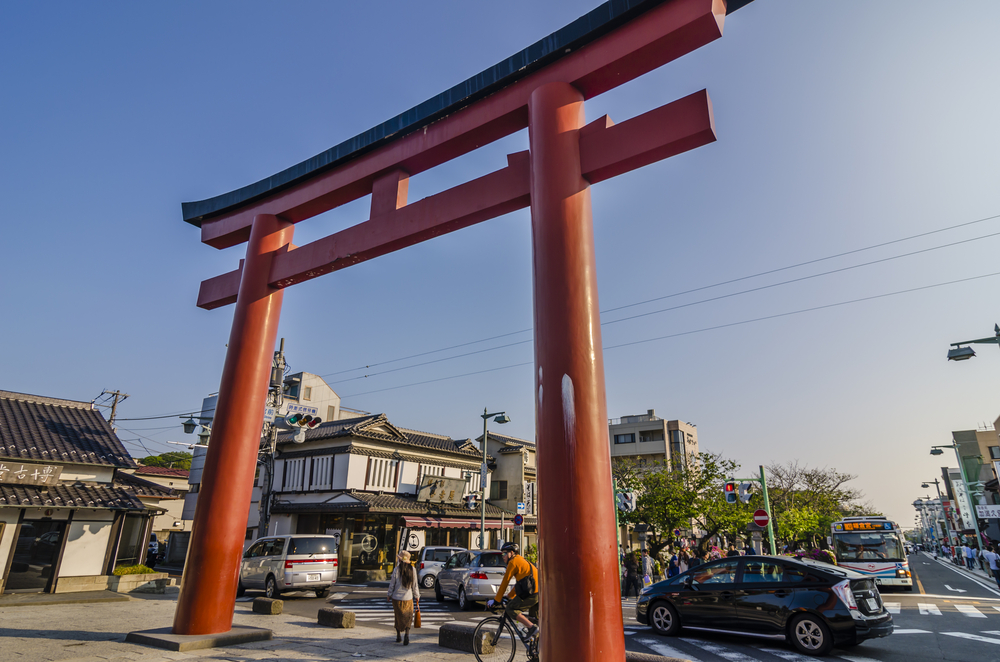 KAMAKURA, JAPAN – 24 April, 2014: Tsurugaoka Hachimangu is Kamakura’s most important shrine. The shrine is dedicated to Hachiman, the patron god of the Minamoto family and of the samurai in general.  (Korkusung / Shutterstock) 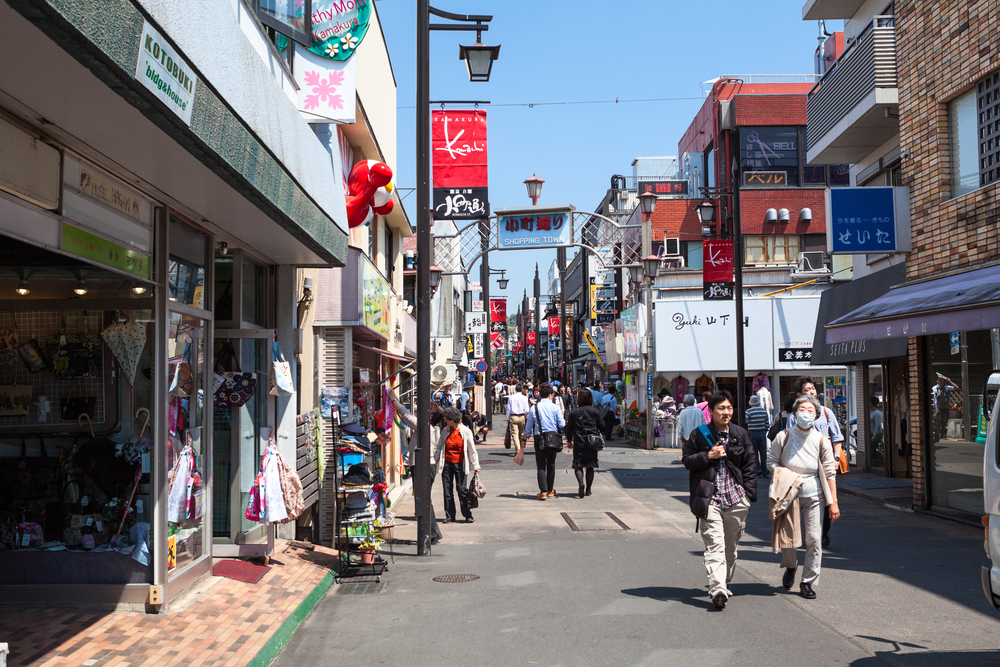 KAMAKURA, JAPAN-Circa APR, 2013: The central street of shopping town is in the center of the city. Tourists walk along trade lines. The Kamakura is a city in Kanagawa Prefecture  (Kekyalyaynen / Shutterstock) 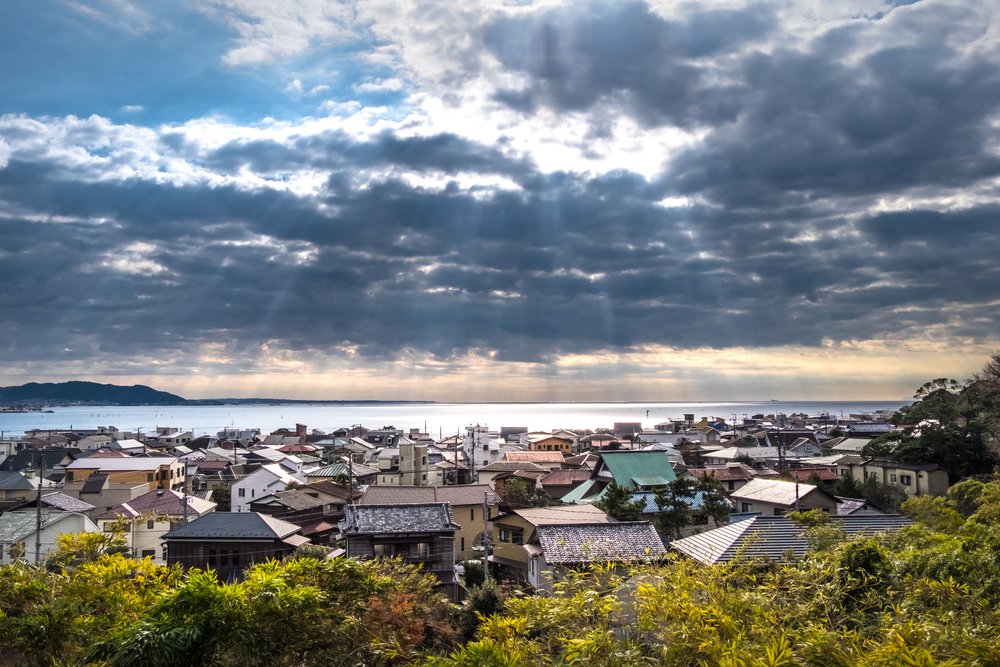 Seashore which is visible from a Inamuragasaki cape. The view from the promontory of Kamakura, Japan. 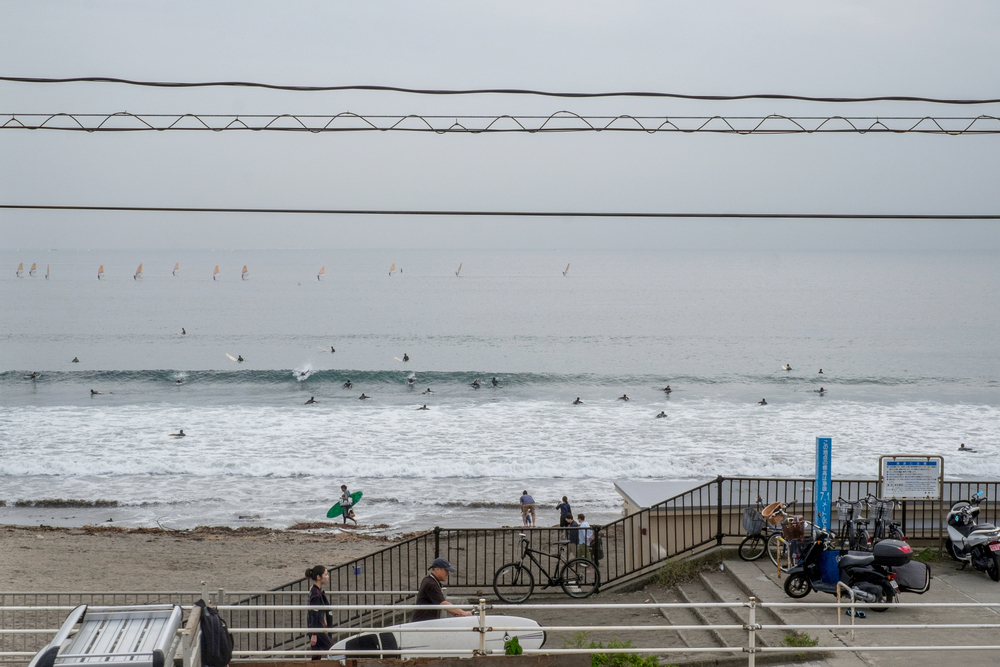 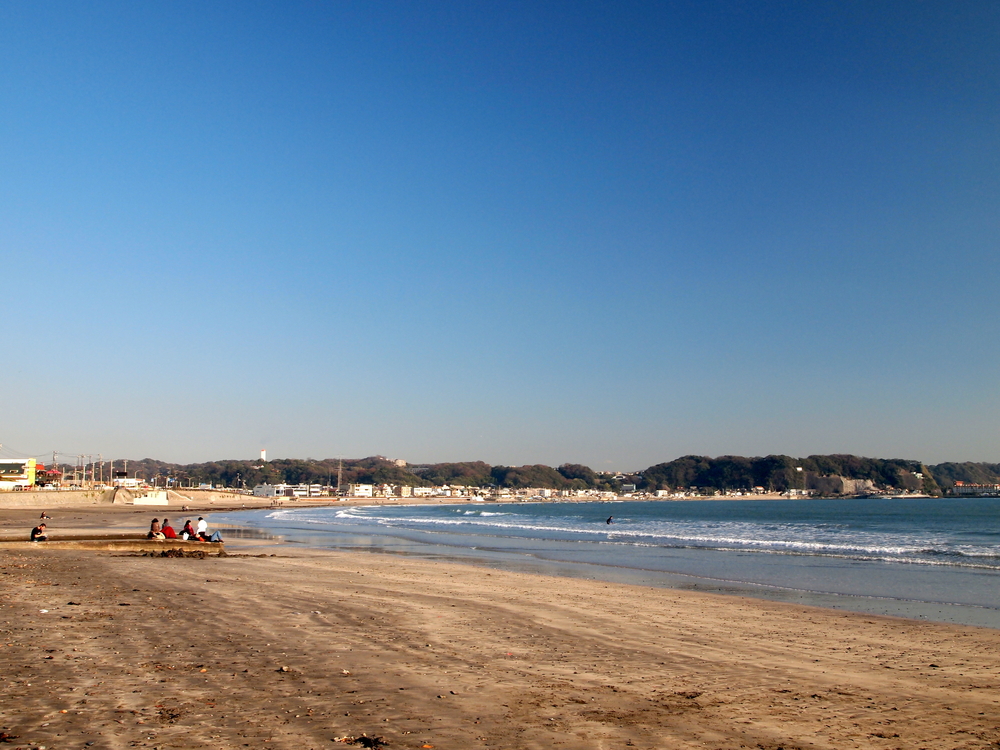 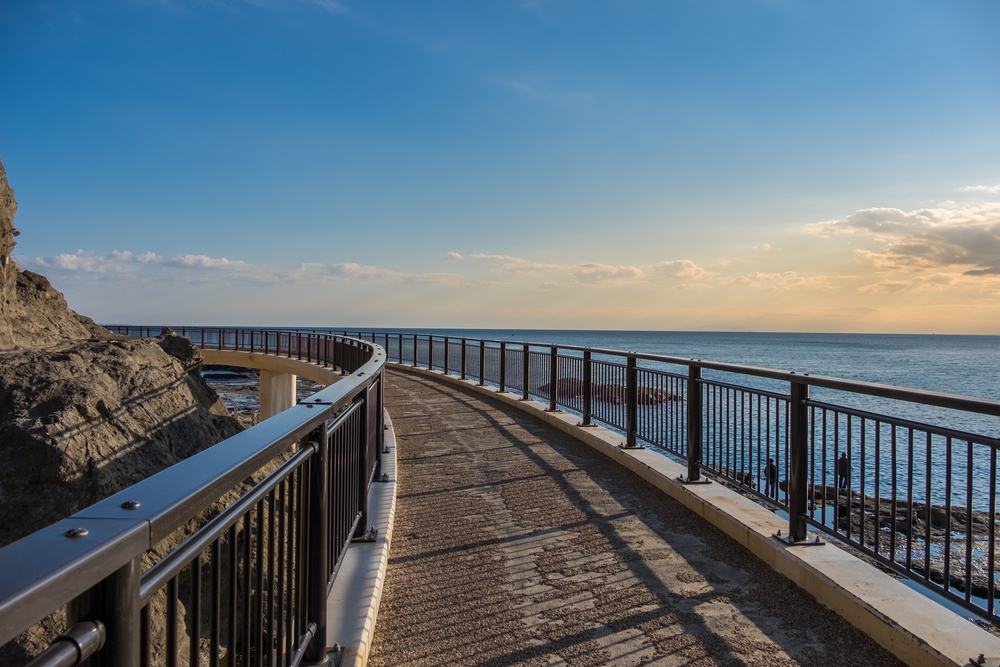 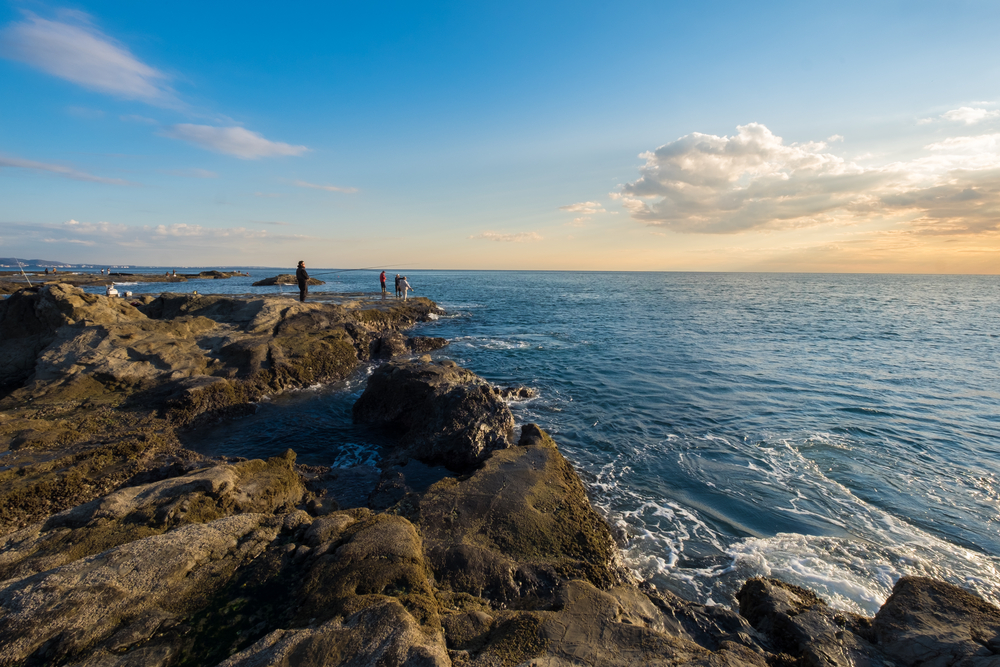 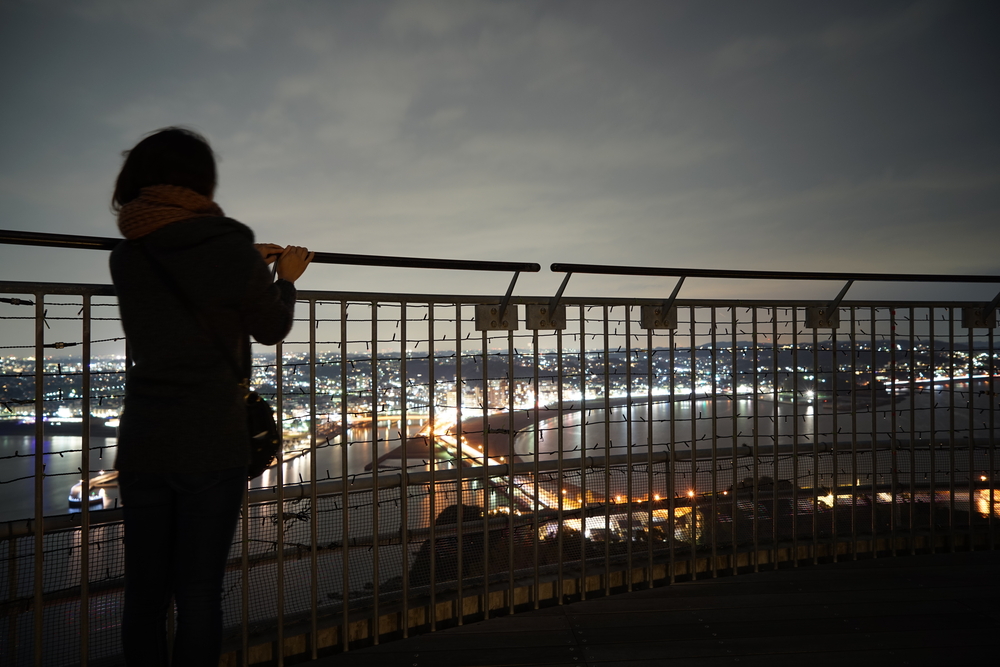 Located to the southeast of Tokyo, Kamakura is on the itinerary of almost all tourists. Once upon a time it was the political capital of the country. Later its glory as a capital was lost to another city, but it remains a favorite tourist destination.

Kamakura has numerous attractions which bring tourists to this small city in great numbers, usually as a day-trip from Tokyo. Located in an open, picturesque location, is the second tallest bronze Buddha statue in Japan. It is 13.35 meters high and is second to the one in Nara’s Todaiji temple. The temple for the goddess of mercy, Kannon, sits in Hasendera. The 9.18 meters tall goddess has eleven heads representing its various characteristics. Adjacent to the temple is the Amida-do Hall, which houses a three-meter tall golden Buddha. From there you can visit the observation deck that offers a splendid view of the city, and back at the base of the slope lies a lovely garden with a temple – Benten-do – dedicated to the goddess of feminine beauty and wealth.

Kamkura’s most prized shrine is the Tsurugaoka. It is dedicated to Hachiman, the Samurai god. The main hall has a museum which displays swords, masks and documents – true treasures of the shrine. Out of the five Zen temples of Kamakura, Engakuji temple is most famous. The temple grounds include Shariden, a well designed hall where rests a tooth of Buddha. Engakunji lights up colorfully during autumn.

The beaches of Kamakura come alive with people in the summer months, while millions of people gather in the historic city to witness the New Year celebrations. In the spring, it is a custom for the Japanese to visit the Zeniarai Benten shrine to wash money. It is believed that by doing so the money doubles – worth a shot.

Inuyama, Exploring the Ancient Castle and Kiso River in Japan