Seligman in Arizona is essentially a Route 66 town thoroughly.  This fascinating town preserves all the taste of the old road.  A visit to Route 66 in Seligman is like travelling back to the old days when Route 66 was still the Main Street of America.  Established  in 1895 after the completion of the “Peavine” Railroad, the railroad camp also called Prescott Junction officially became Seligman and was a significant railroad stop along the line.  Seligman was seamlessly merged with Route 66 upon its arrival in the late 1920’s.  The railroad and visitors traffic from Route 66 had fueled the economic security of Seligman.  In the late 1970’s Seligman, like the fate of many old towns in similar history, was bypassed by the Interstate and the Santa Fe Railroad halted its operations in the town in 1985.  However, the historical traits could still be found in Seligman . (photos by LARISA DUKA) 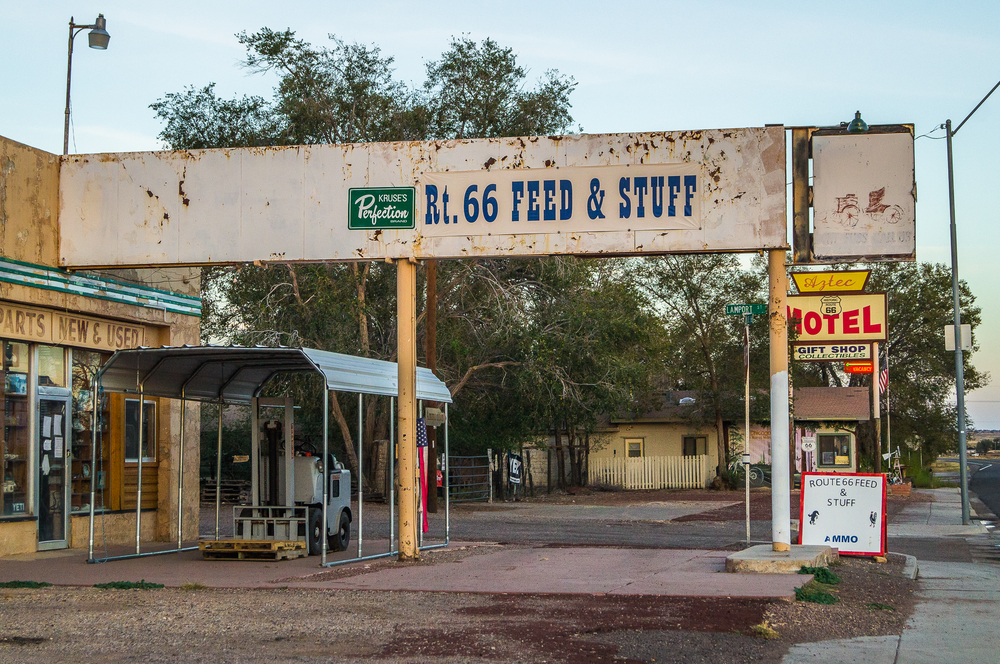 Seligman,Arizona,USA, October 25,2015: Views of the route 66 decorations in the city of Seligman in Arizona. 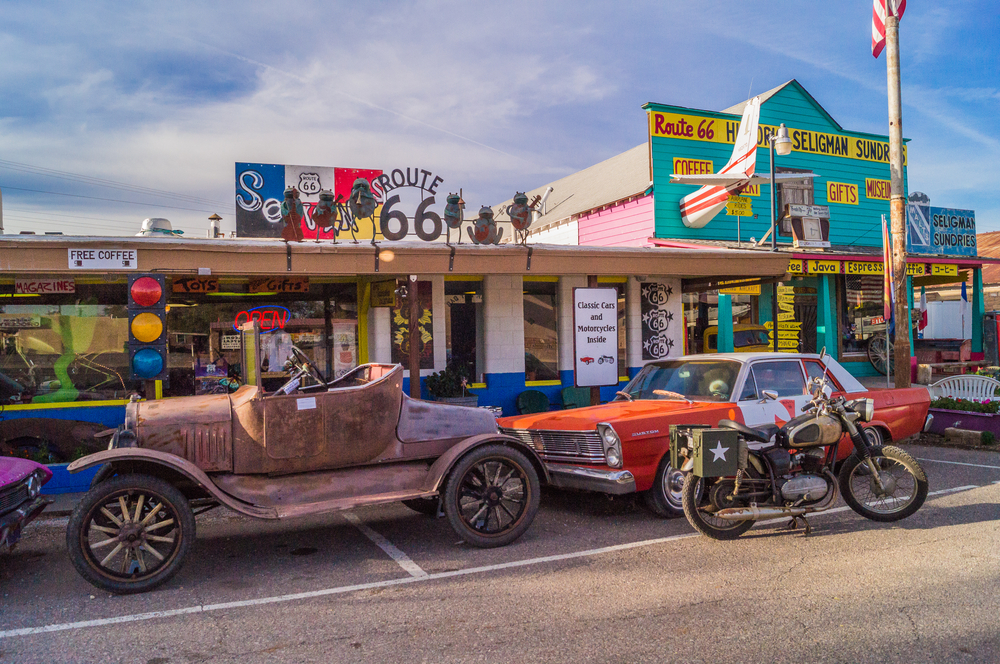 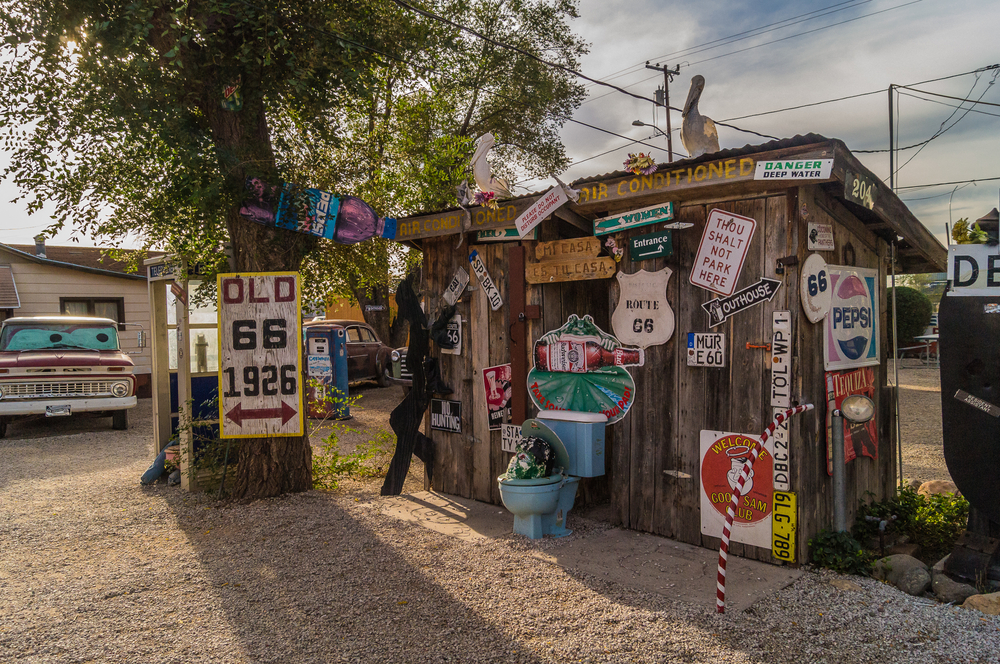 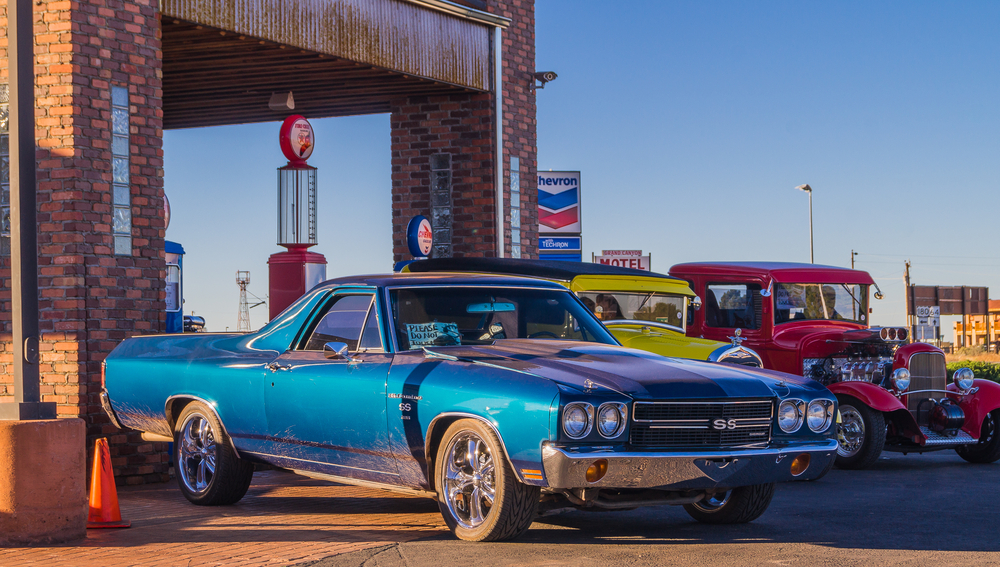 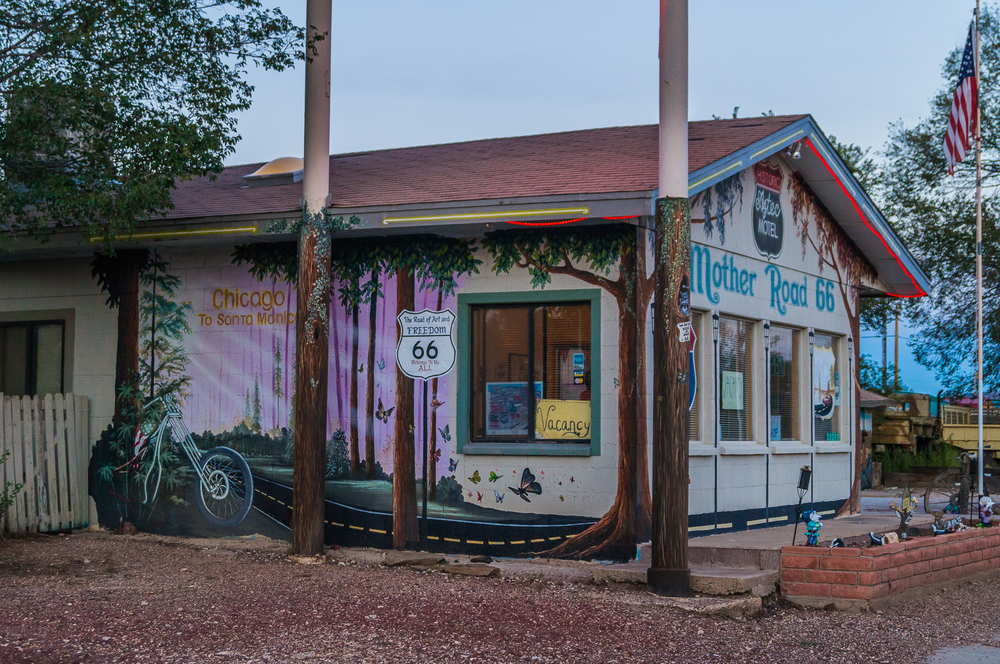 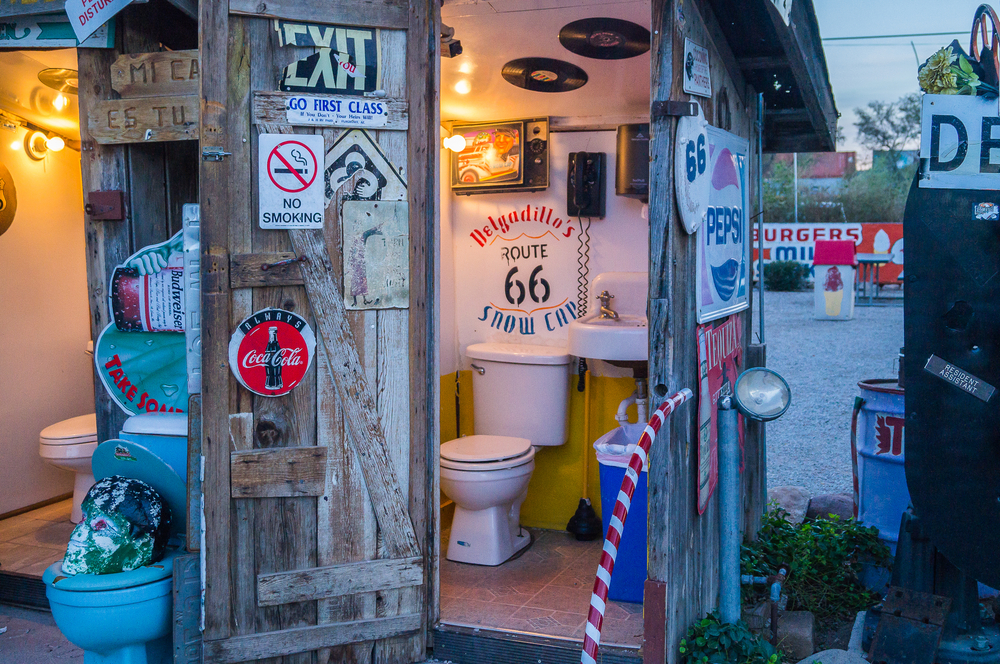 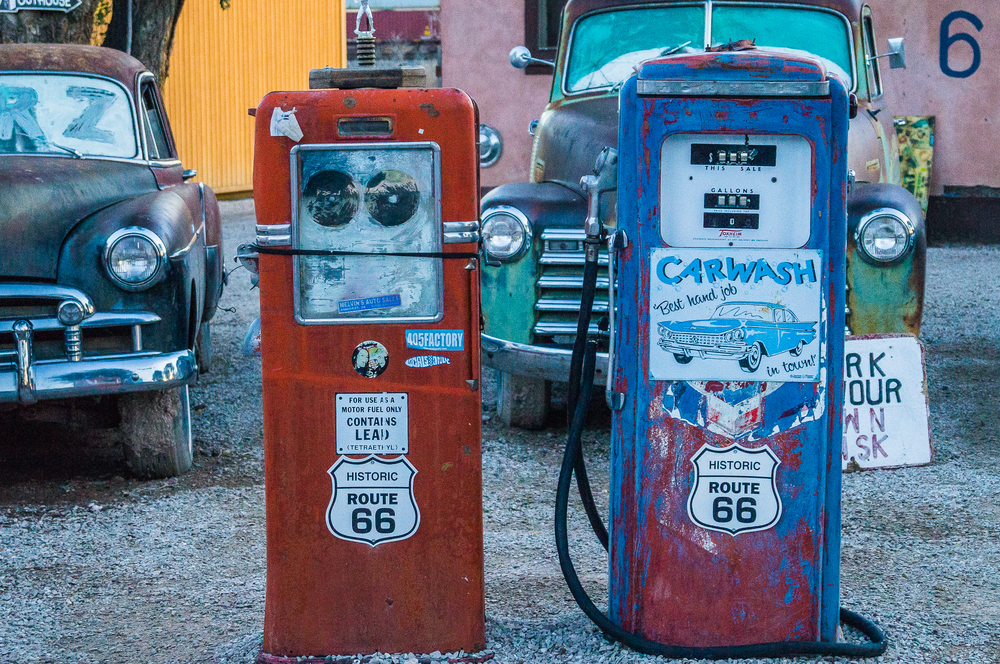 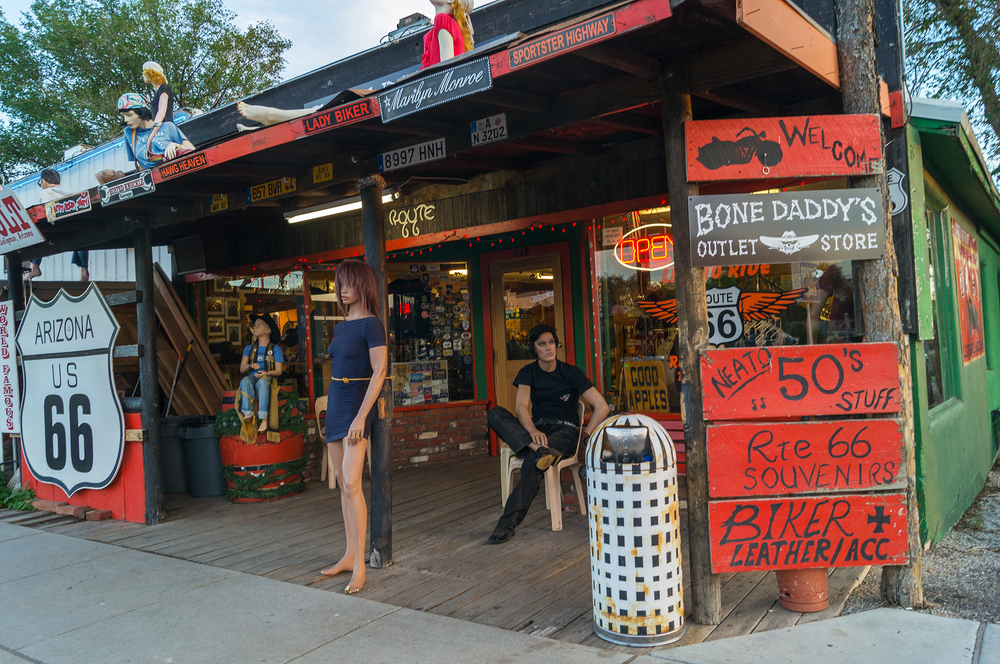 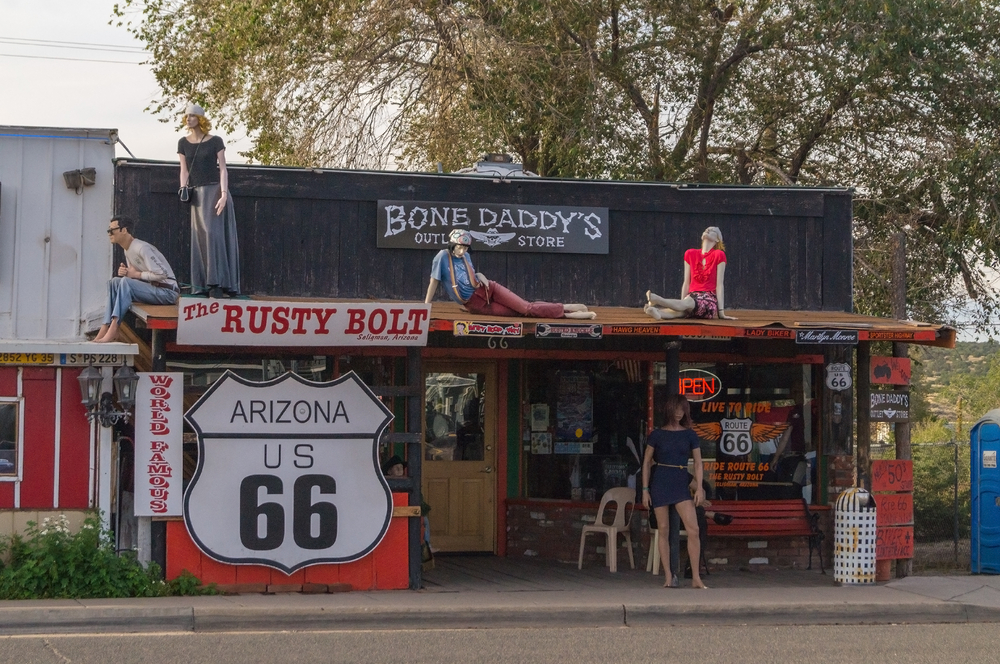 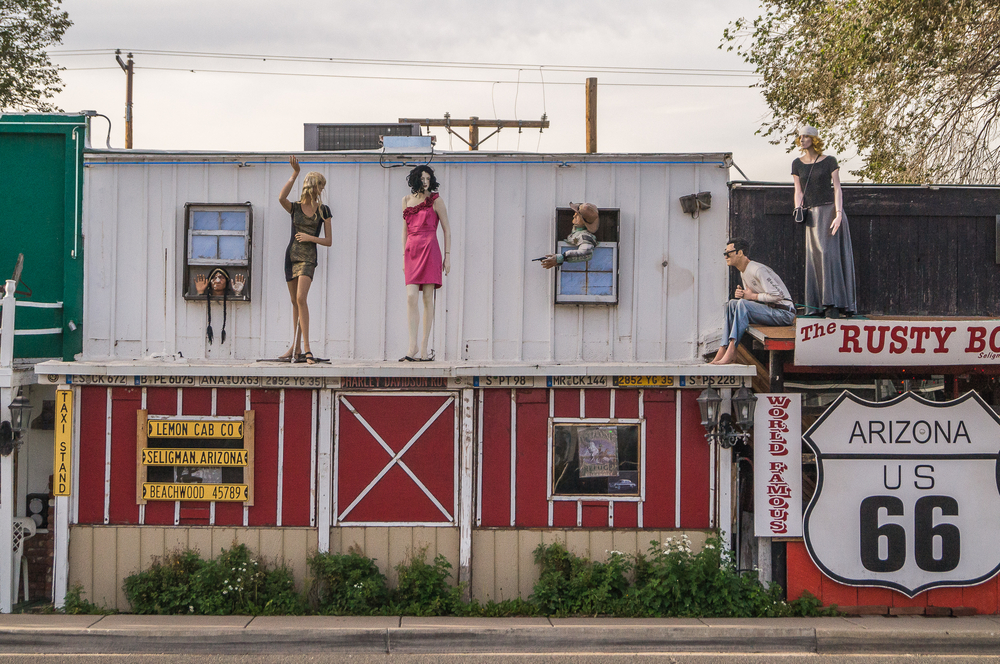 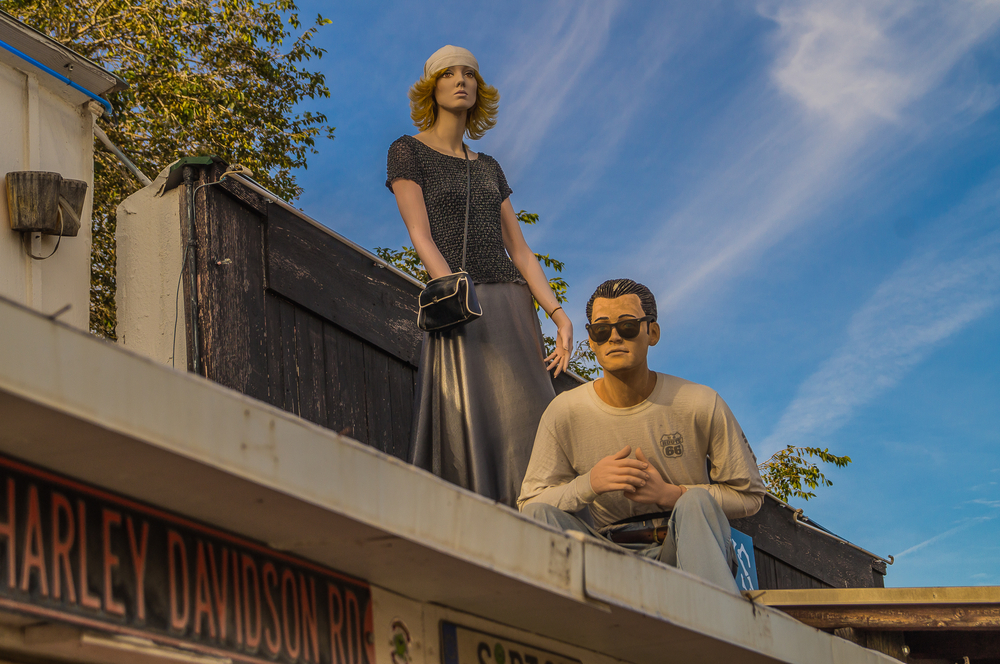 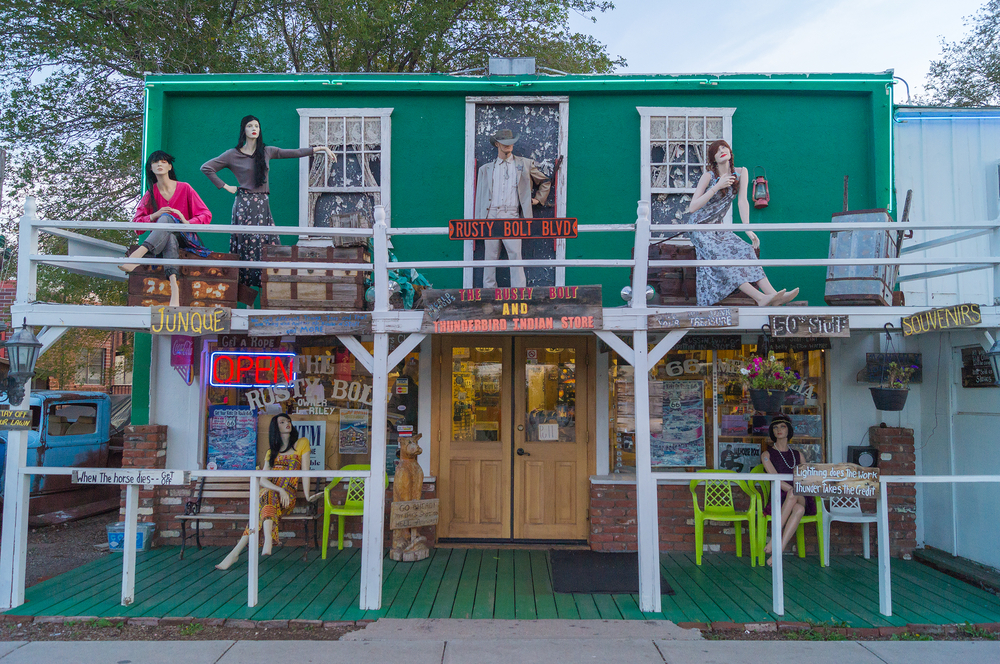 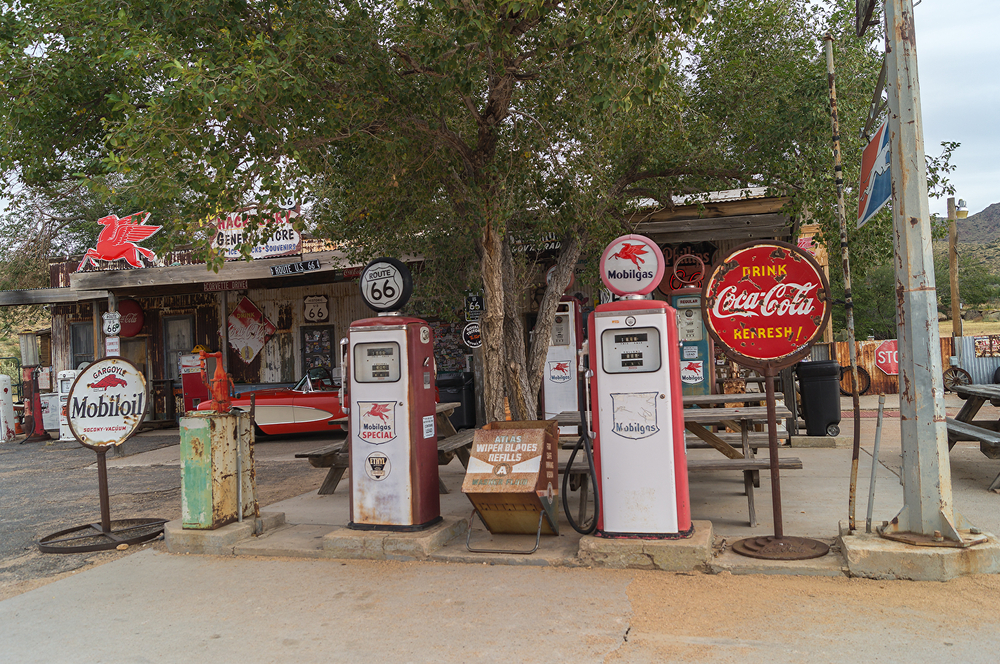 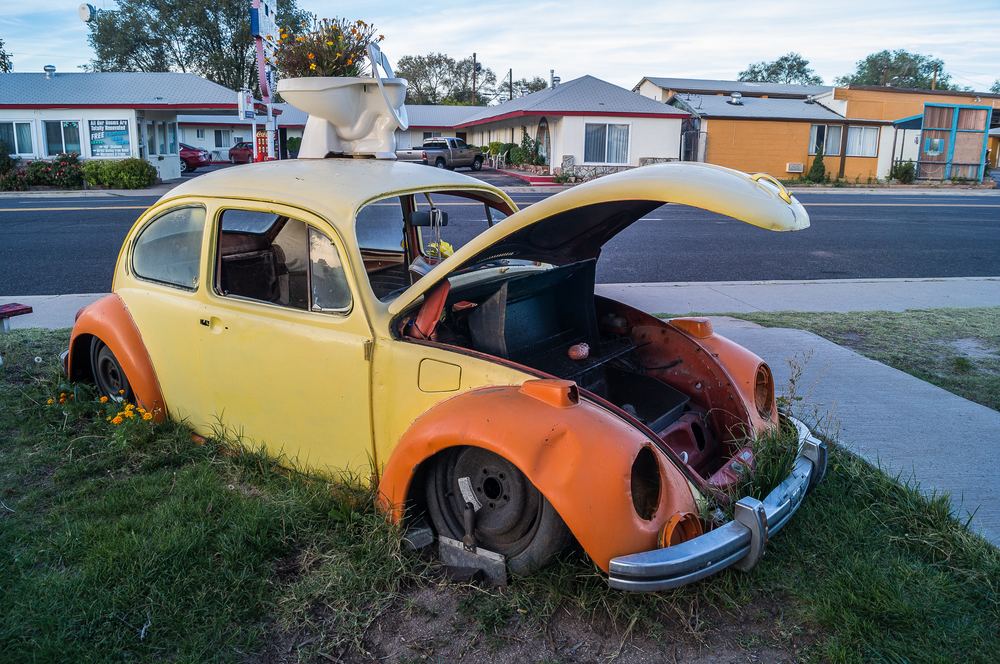 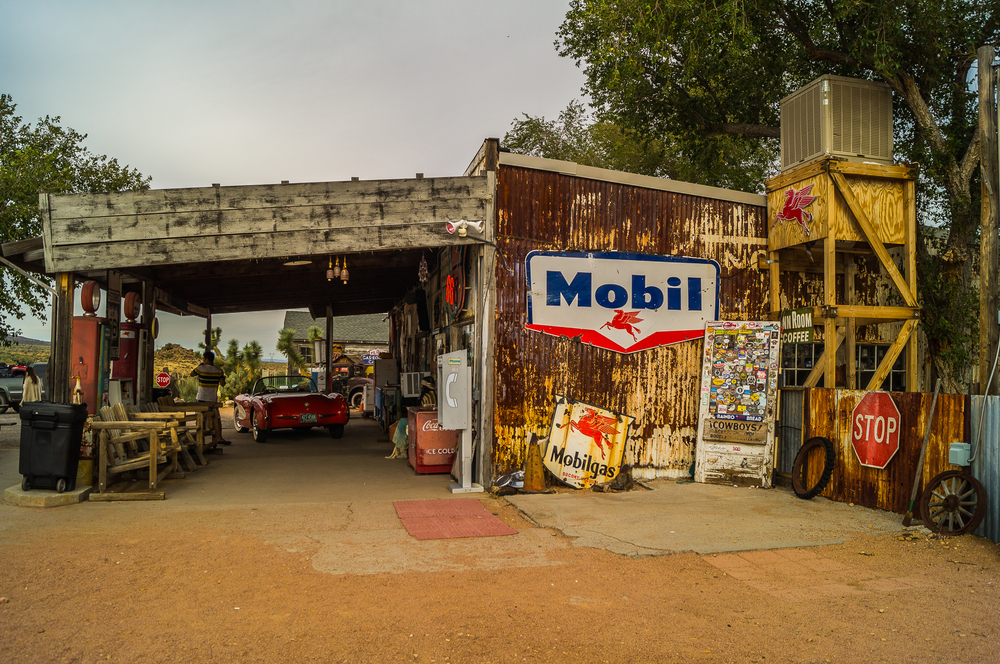 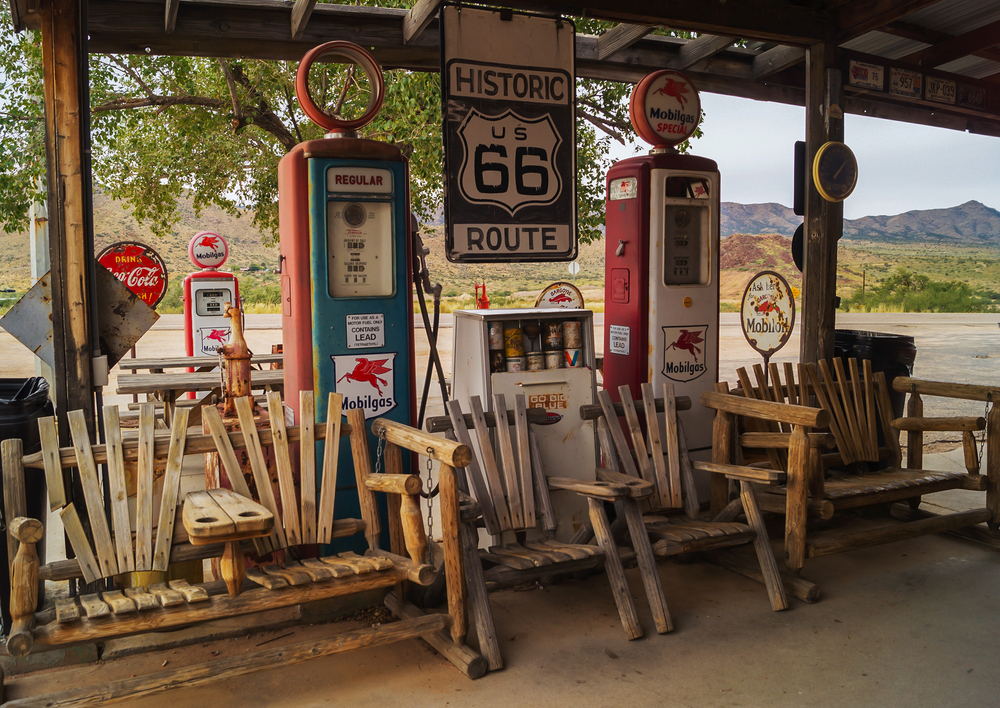 Entrance to landmark Hackberry General Store on Route 66 in Arizona. This roadside service as a museum for historic Route 66 memorabilia. 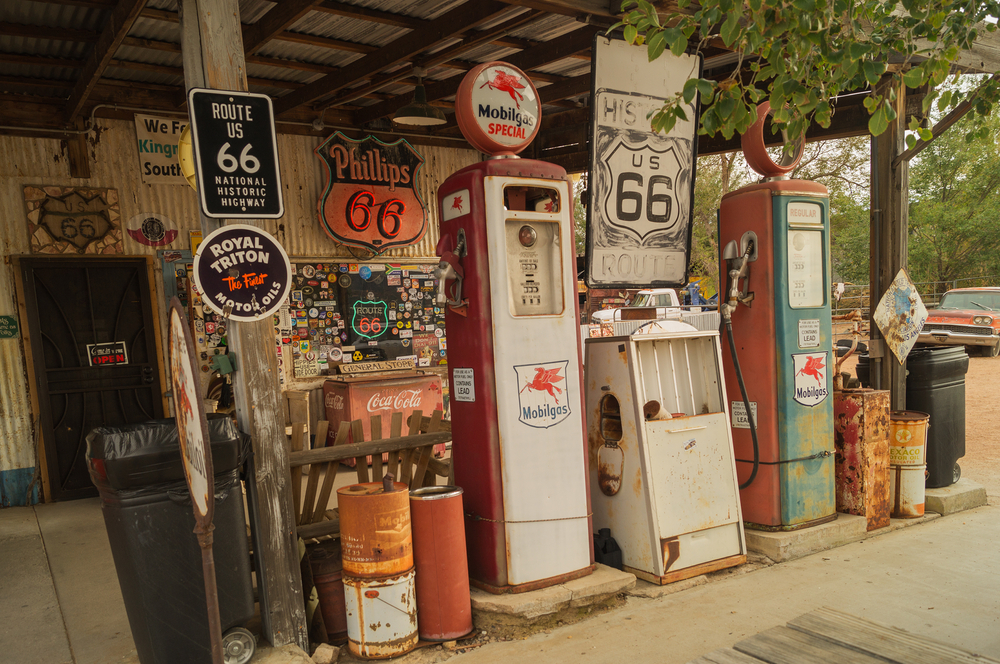 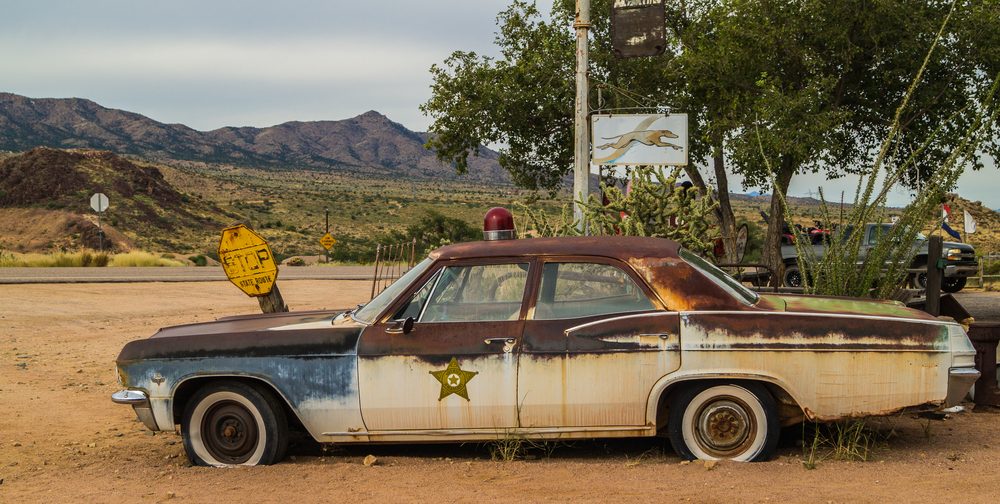 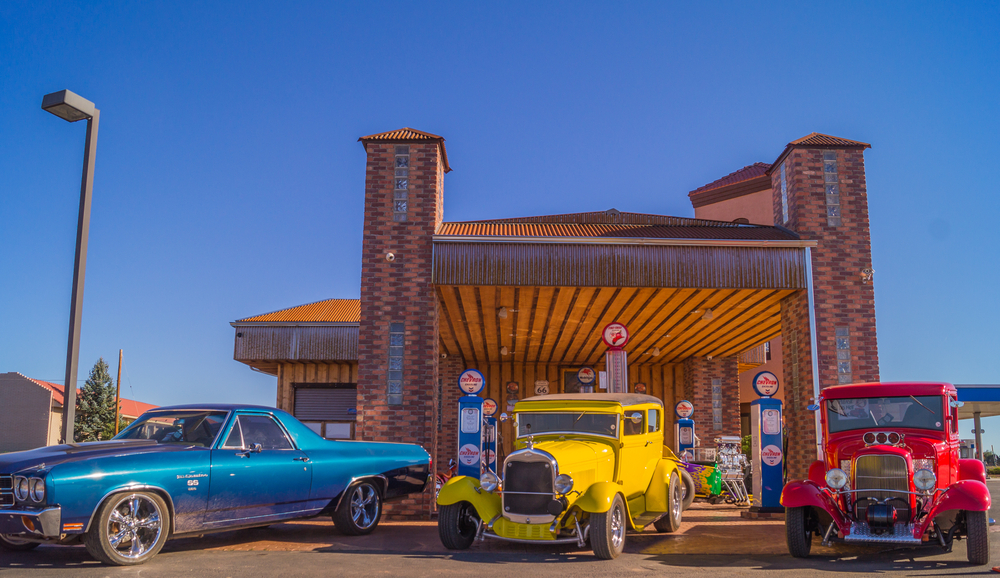 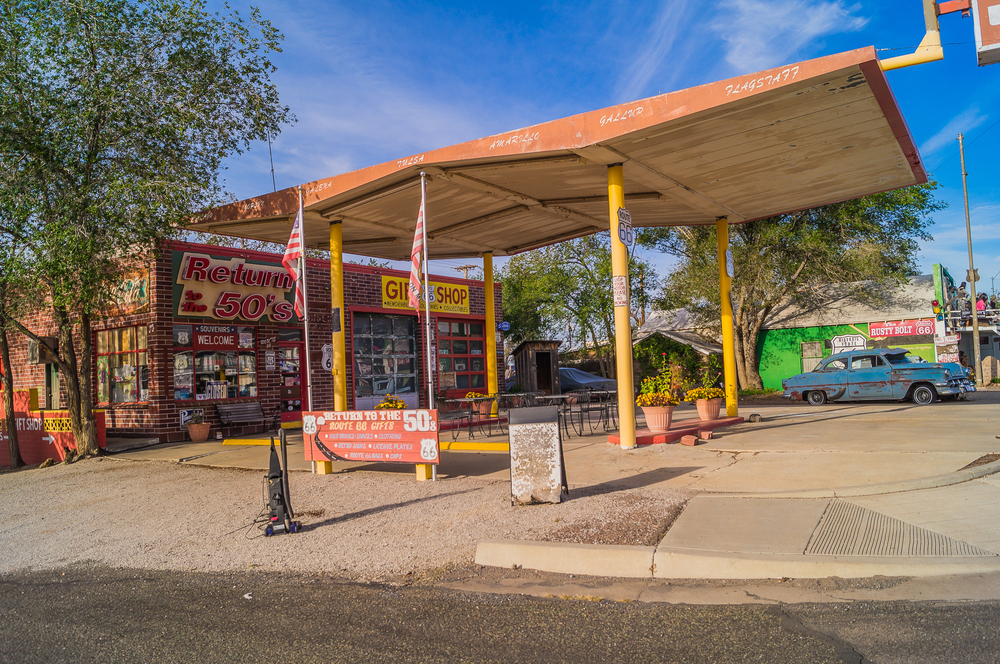 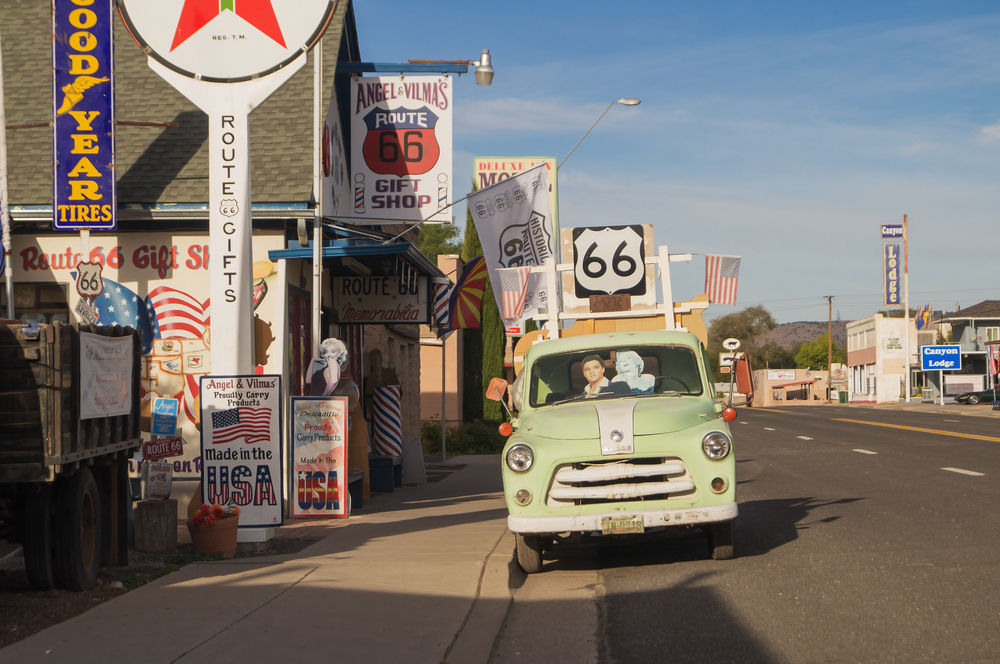 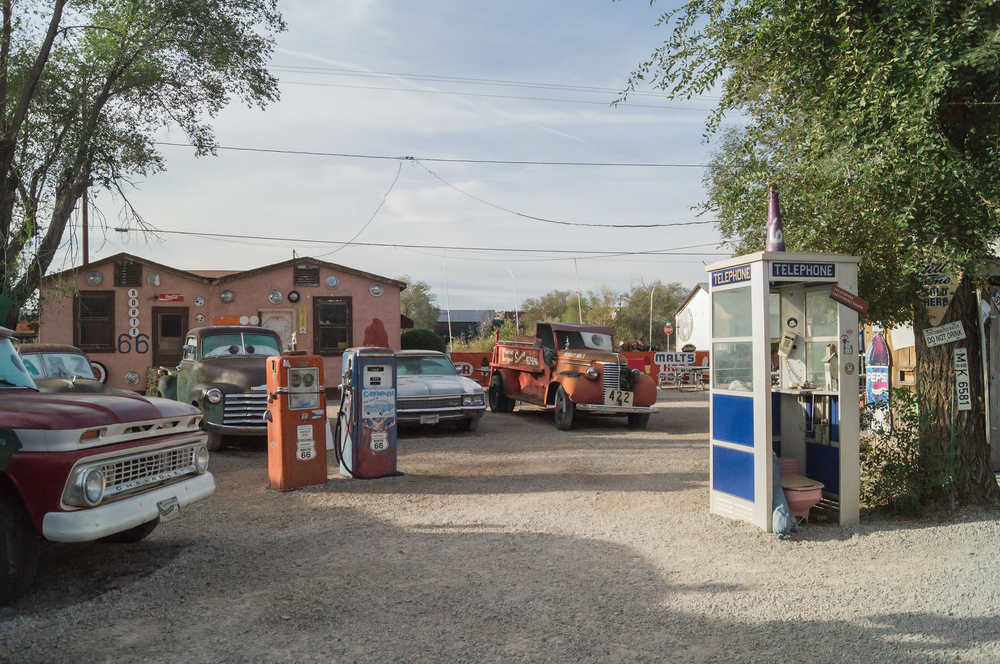 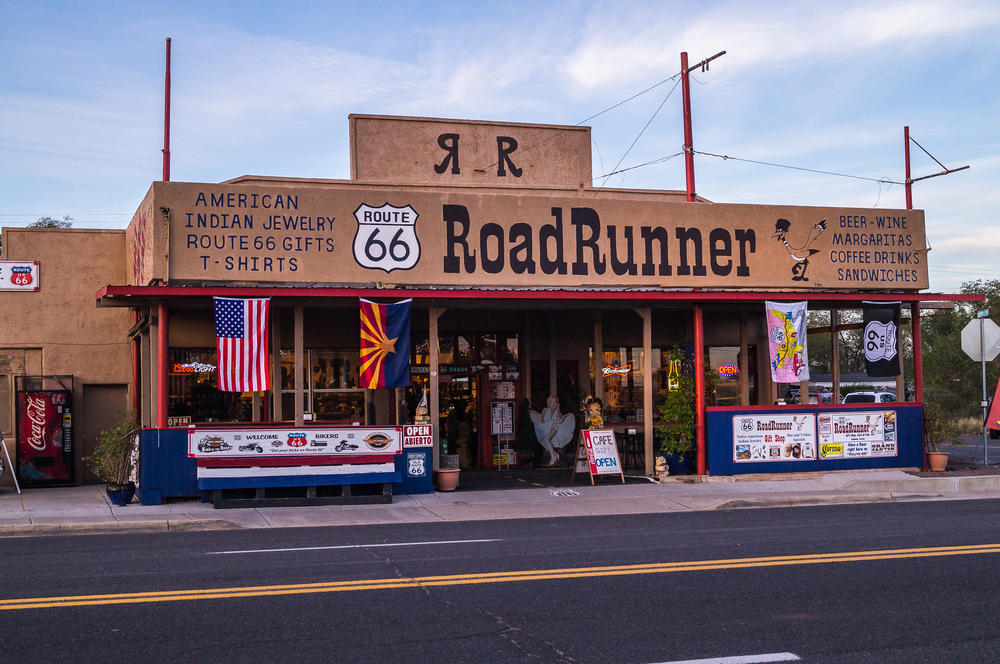 Route 66 can trace it’s history back to the late 1920’s when it was first proposed and laid out. However it was not until 1938 that the road was completely paved from it’s eastern beginning in Chicago, Illinois to it’s western terminus in Santa Monica, CA some 2,450 miles later. Of course the route can be traveled either eastwardly or westerly though most Route 66 travelers prefer to head from east to west just as the Joad family did in John Steinbeck’s famous literary work, The Grapes of Wrath.

Sadly, Route 66 began to be replaced in the 1960’s by new Interstate highways that bypassed many small towns along the way and was removed completely from the interstate highway system in 1985. However in part to many Route 66 organizations, small town chambers of commerce, enthusiasts and historians a plenty refused to let it die. Over the past 25 years there has been a new resurgence of heritage tourism that has rekindled interest in preserving this great piece of Americana history & nostalgia that is Route 66.

Often referred to as “The Mother Road”, “America’s Main Street” or “Will Rogers Highway” the route passes through eight different states: Illinois, Missouri, Kansas, Oklahoma, Texas, New Mexico, Arizona and California. Let’s take a look at the state of Arizona in more detail.

Heading west, Arizona is the 7th of the 8 Route 66 states and has 401 miles from border to border. It boasts some of the most beautiful scenery, a few of the most unique must-see establishments, the highest elevation and the longest unbroken stretch of Route 66 on the entire journey.

Geographically, Arizona is home to Meteor Crater, Petrified Forest and Painted Desert. These locations make for some incredible photo opportunities but also a chance for exploring and hiking these natural attractions.

About 75 miles into Arizona, past both the Petrified Forest and Painted Desert is the town of Holbrook. Home to the Wigwam Village Motel, most Route 66 travelers look forward to sleeping in a tepee and many cite this landmark as a highlight of their trip. Further west is Joseph City, a Mormon establishment set up in the late 1870’s. Located in Joseph City is the famous Jackrabbit Trading Post. One of the most well known signature sites of Route 66 is the famous billboard that exclaims “HERE IT IS” located at the Jackrabbit Trading Post.

Further west past the Meteor Crater and the towns of “standin’ on the corner” Winslow, the extinct Two Guns, the abandoned Twin Arrows and the “don’t forget” Winona lies the city of Flagstaff. Flagstaff is home to the famous Lowell Observatory and is also the gateway to the Grand Canyon located an hours drive north. The canyon is well worth a side trip off Route 66 to see one of the eight natural wonders of the world. If you’d rather you can also access the spectacular Grand Canyon via the Grand Canyon Railway out of Williams just 30 or so miles west of Flagstaff. Between Flagstaff and Williams lies Brannigan Peak. At 7,320 feet above sea level it is the highest point of elevation along the entire route of Rt. 66.

15 miles west of Williams is Ash Fork, the flagstone capital of the world. Just past Ash Fork you can say goodbye to I-40 as you begin the longest unbroken stretch of Route 66 on the entire journey. Be sure to stop at the legendary Snow Cap Drive-in in Seligman and the fascinating general store in Hackberry before arriving in Kingman. Here you’ll find many still-preserved business establishments catering to the Route 66 traveler including a very well done museum.

Be sure to leave Kingman while you still have daylight because you’re not going to miss the incredible scenery that lies ahead as you travel through the Black Mountain switchbacks & hairpins ahead. Oatman awaits, as do the many wild burros that call the old mining town home. Be sure to check out the historic Oatman hotel where Clark Gable and Carole Lombard spent their honeymoon.

Leaving Oatman you can take a quick side trip over to the casinos of Laughlin Nevada and try your luck or you can continue on through Golden Shores, Topock and get back onto I-40 to cross the mighty Colorado River into California.

David Harber is a Route 66 traveler, historian and owner of [http://www.66chips.com], a website dedicated to a unique and colorful collectible that should be owned by every Route 66 aficionado.