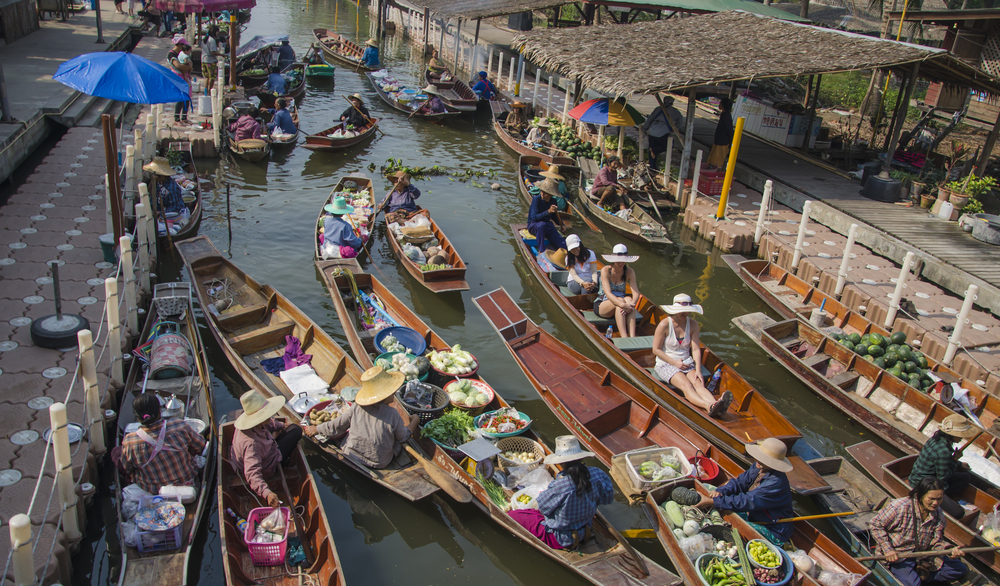 Damnoen Saduak Floating Market is a floating market situated in the Damnoen Saduak District, located about 100 kilometres southwest of Bangkok, Thailand.  This large and popular floating market features many small boats laden with colourful fruits and vegetables and paddled by Thai ladies wearing bamboo hats.  The travel spot is among the most often published in travel magazines and brochures of Thailand.  (Copyright: tewpai dechpitak) 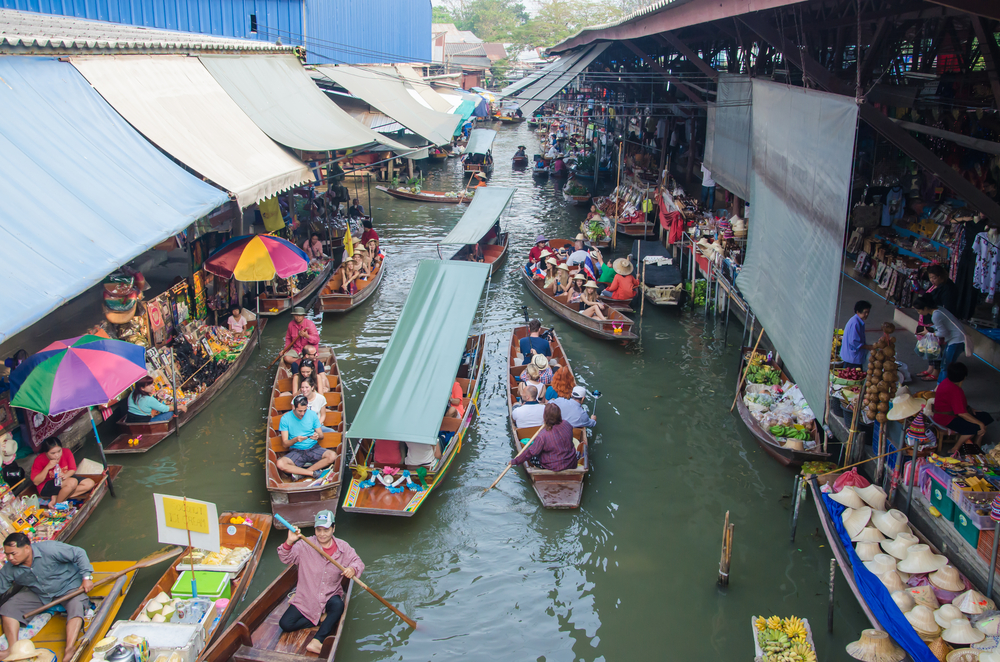 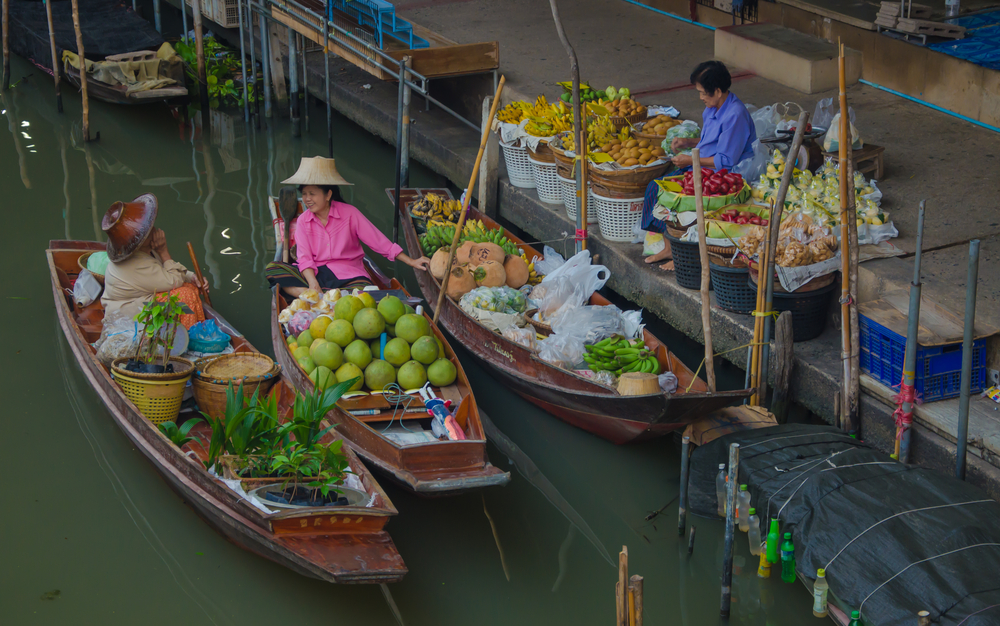 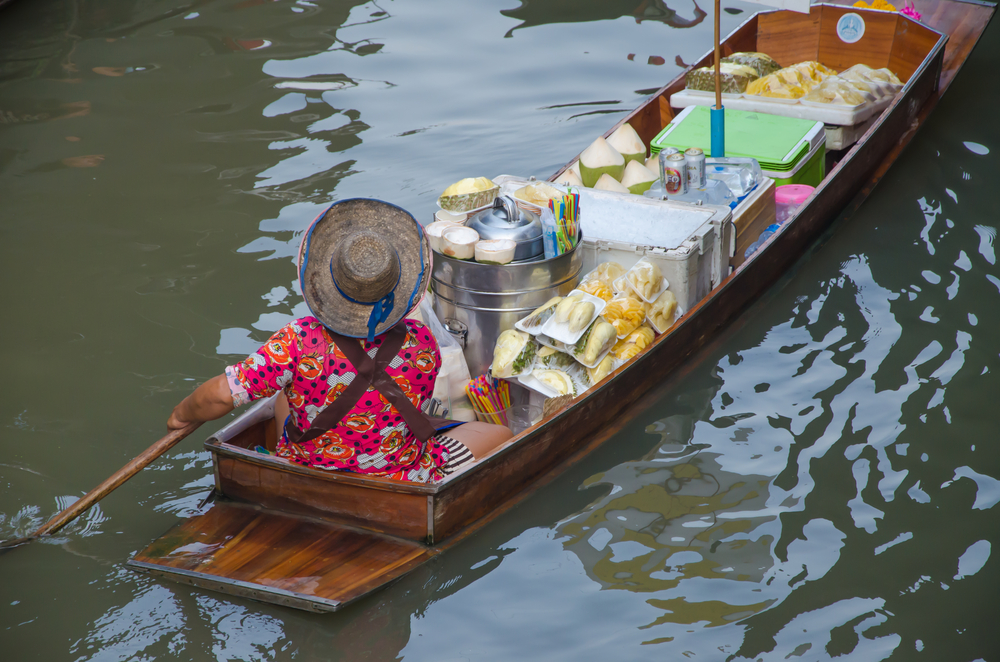 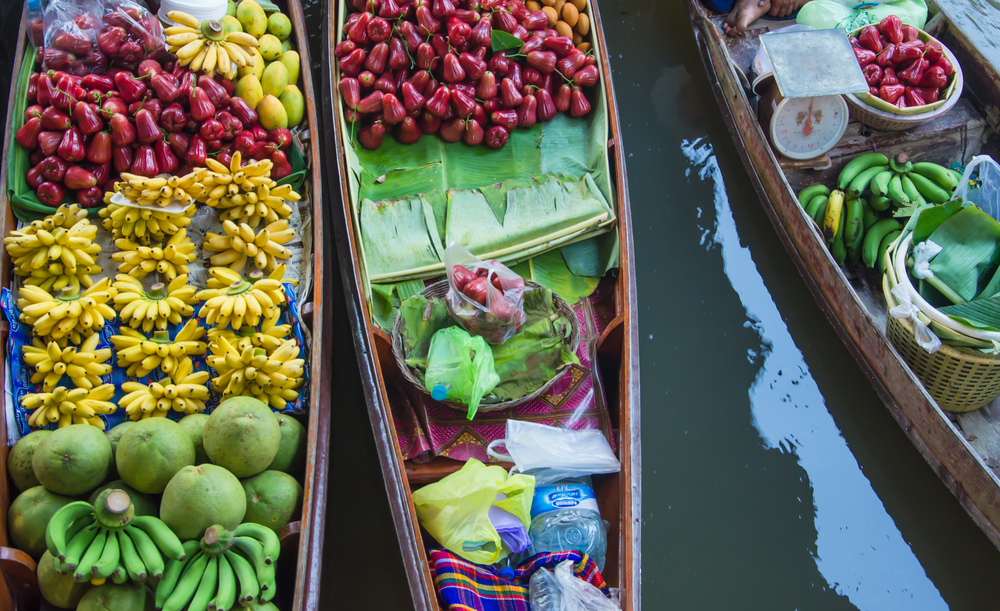 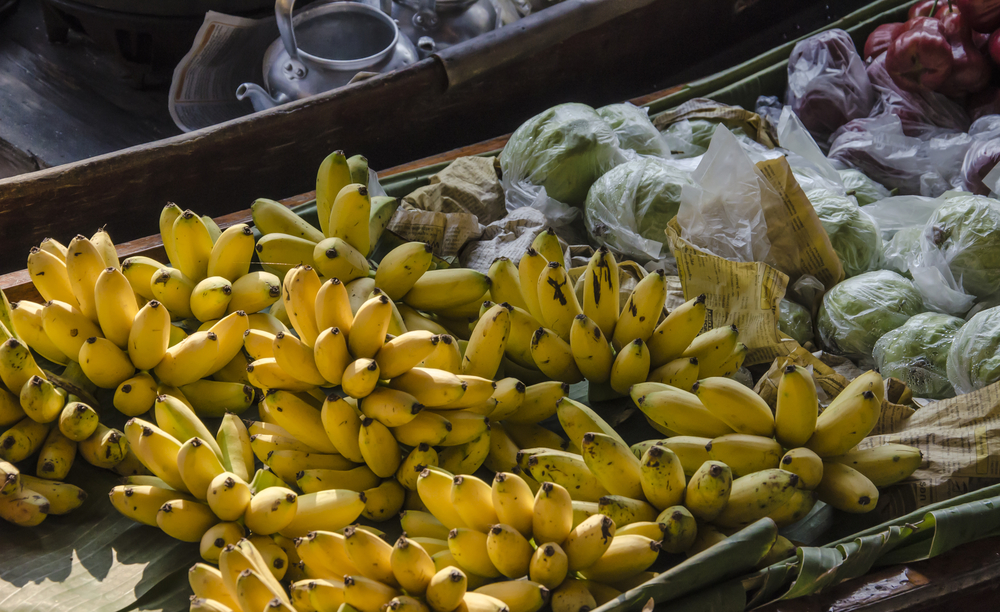 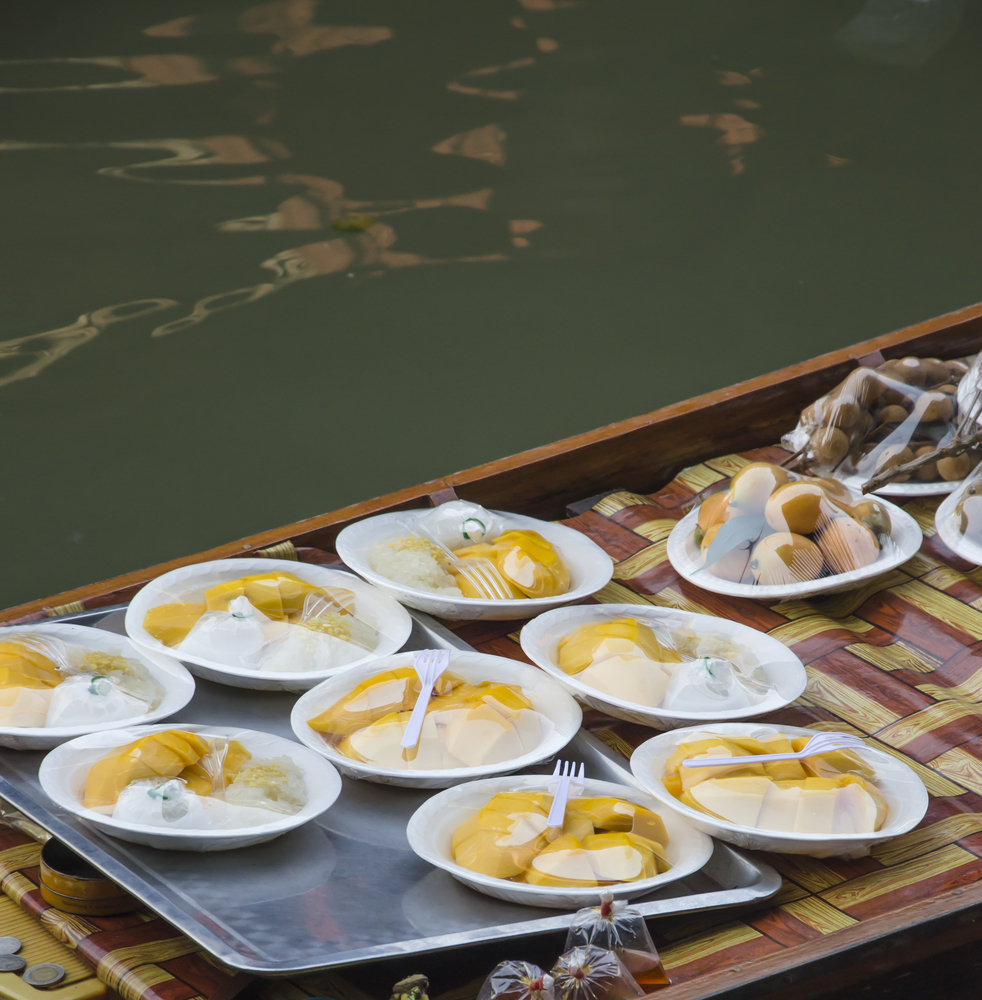 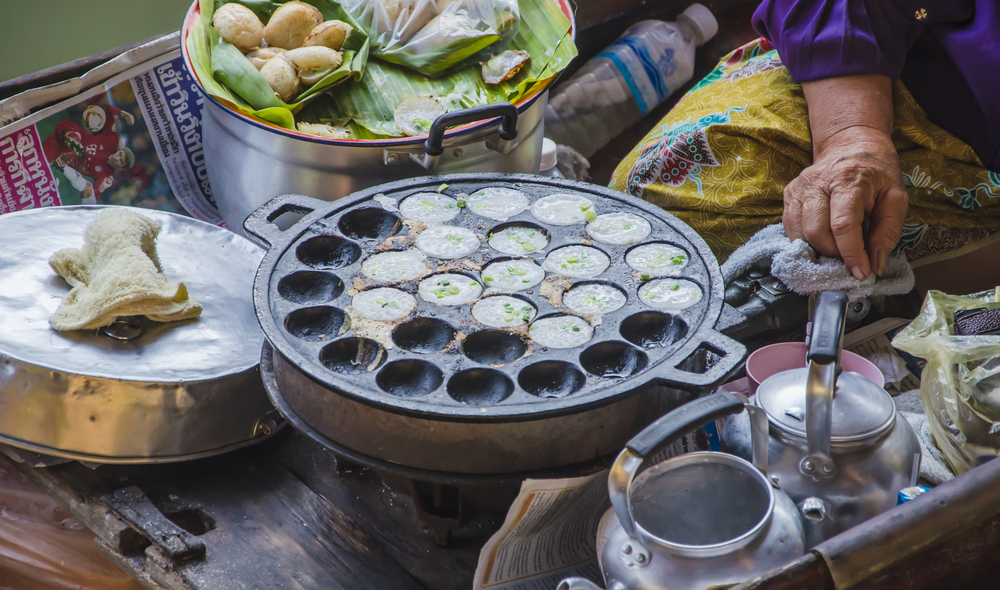 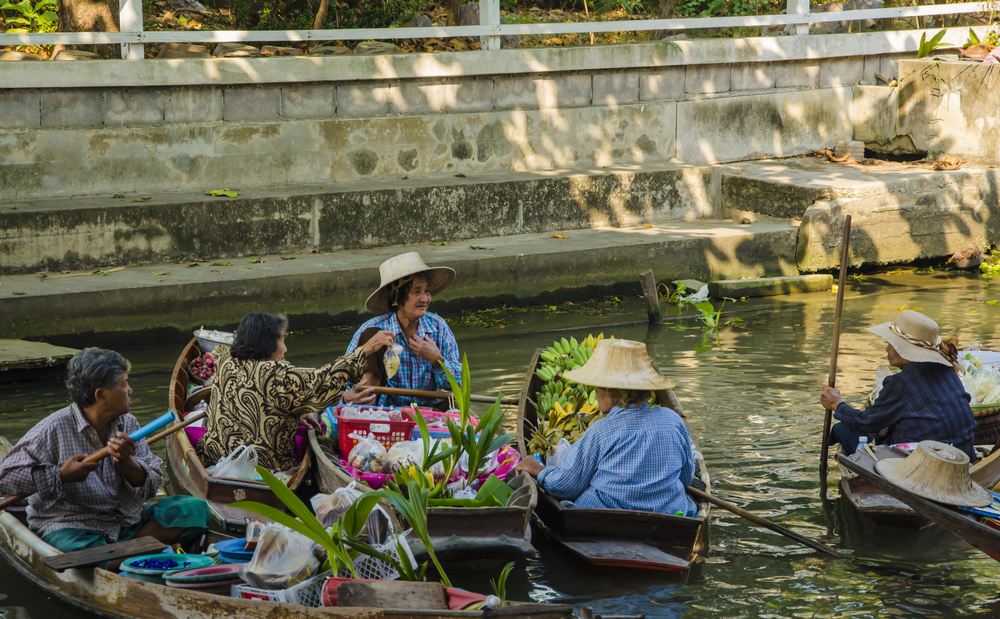 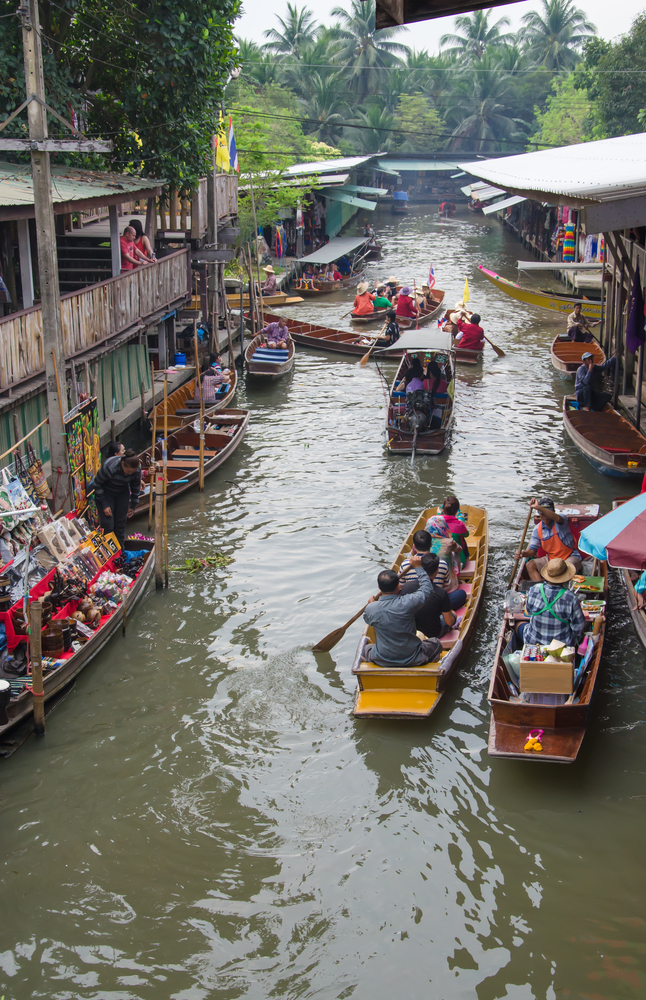 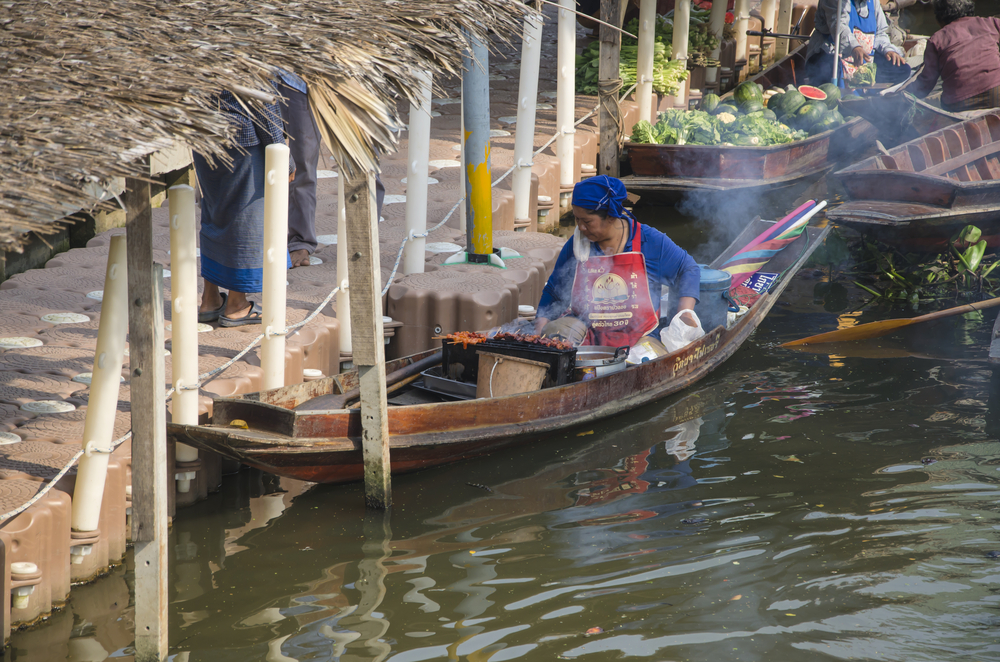 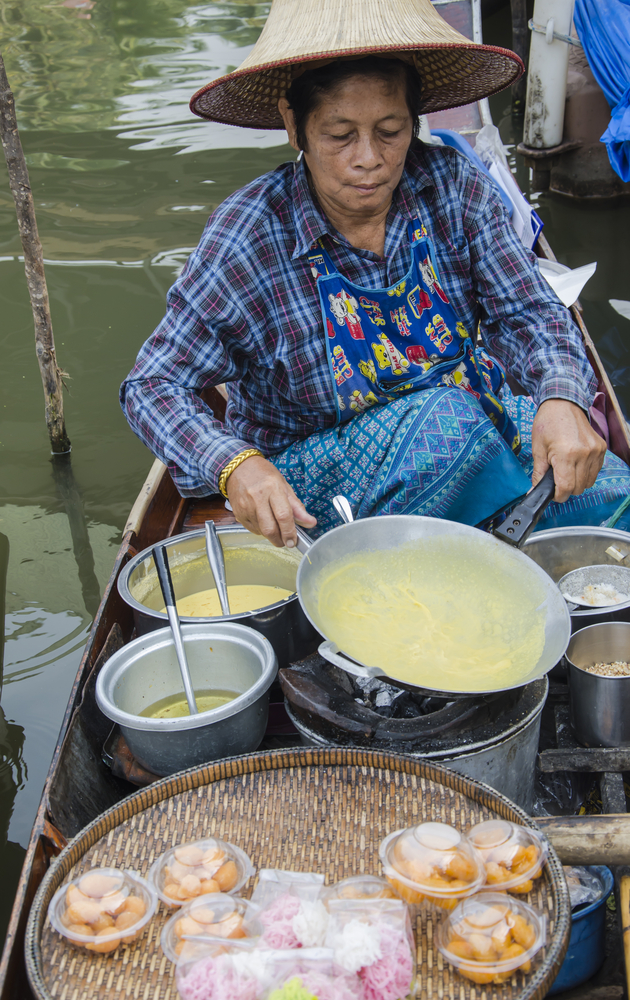 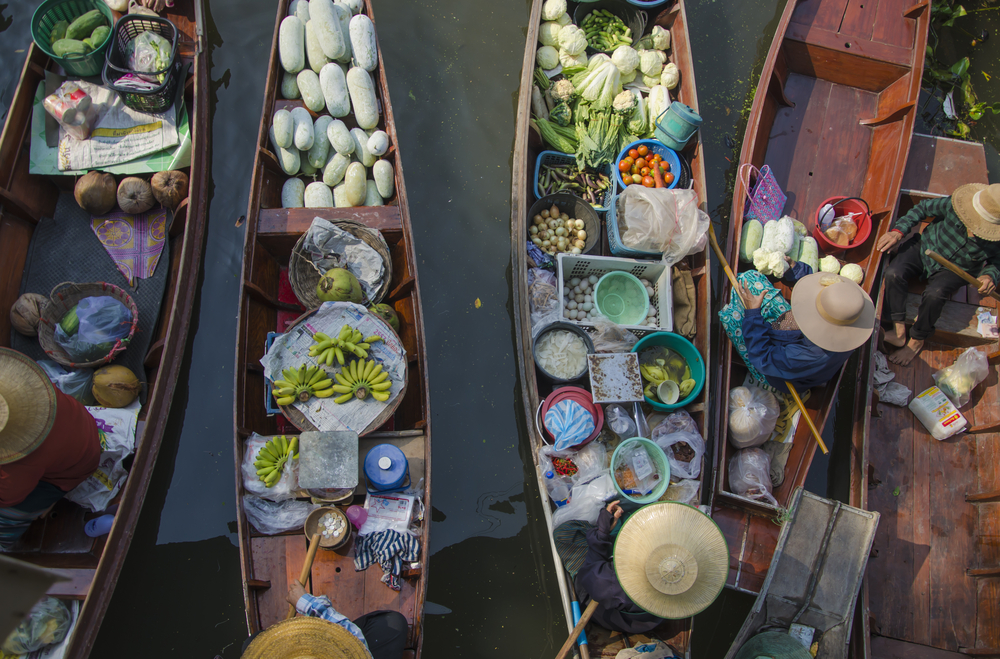 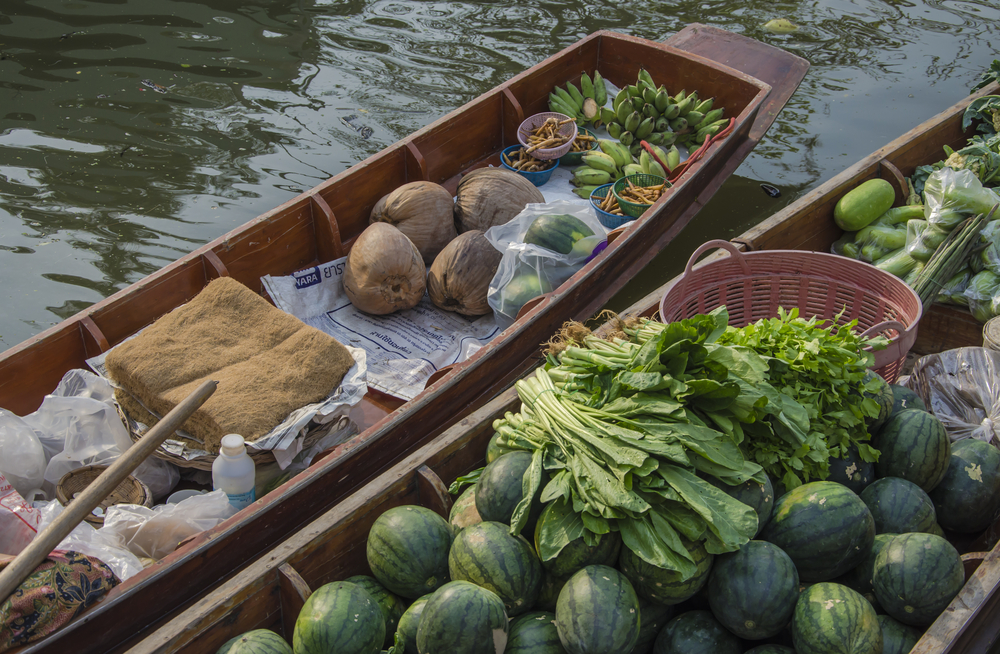 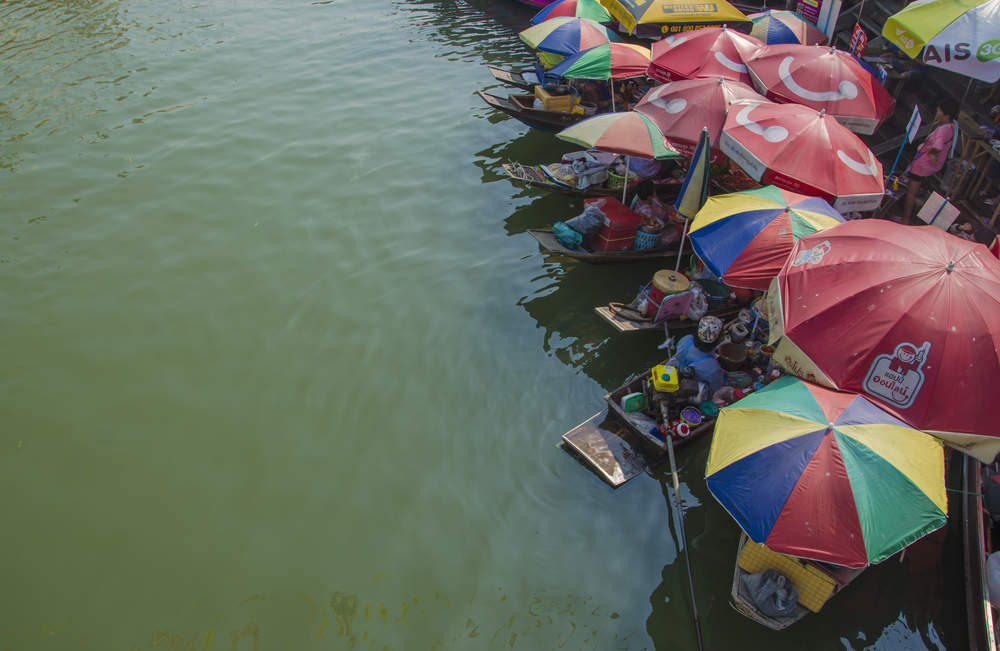 Unfortunately all those pretty pictures you’ve seen of Damnoen Saduak floating market are either a marketing ploy or just some tourists way of making themselves feel better after being ripped off at Thailand’s largest tourist trap. The truth is 90% of the merchants at the floating market are selling tourist trinkets like carved elephants, Thailand t-shirts, hammocks and of course those straw hats you see the merchants wearing at the market. Most of the merchants are actually on the banks of the canals and the boat drivers get a cut of the sales so they stop at all the souvenir shops. You’ll see people selling fruits and vegetables from their boats but they are few in comparison to the trinket traps.

Now, I knew all this going into it and actually the scam starts well before you get to the market but I had other plans. First let me tell you how the scam lays out. Taxi drivers throughout Bangkok have brochures of the floating market and they push it to all the tourists. They will tell you that they will take you there on the meter or off the meter for 800-1000 baht. You might think that’s a good deal considering the distance away from Bangkok, and it is.

The taxi drivers make their money from kickbacks. Once they get you to the area they take you to the power boat tour of the Damnoen Saduak floating market where the operators meet you at the taxi and give you a bottle of water before telling you the cost for a 2 hour trip around the market will cost you 3500-4500 baht per person (over $100). At this point they have you. Most likely you know nothing of the market and don’t realize there are other boat operators and you’ve come such a long way to see it so you relent and pay up.

Knowing all this beforehand I decided to go about my trip to Damnoen Saduak floating a different way. One morning while walking through Bangkok a taxi driver gave me the spiel and I told him I knew the deal but I still wanted to go. I needed to go to Pattaya in a few days and I told him I would use him for that trip as well if he could get me a deal, surprisingly he said “ok”. He said I could pay the meter or 1000 baht and he would charge me 1400 baht to go to Pattaya. The deal was set and he picked me up 7am the next morning.

You see, I didn’t care about the floating market except to get a few of the traditional photographs of the fruit and vegetable merchants selling from their boats. I knew that the two market areas that comprised The Damnoen Saduak floating market were a very small part of the canal system, the larger part is where the people live and that was what I wanted to see…and like a box of crackerjacks there is a prize hidden in the canals, a beautiful temple which very few tourists to the floating market ever get to see.

After the hour and a half journey to the floating market the taxi driver hooked me up with a power boat owner that would cruise me through the markets then through the residential canals and to the temple located further back. The boat set me back 800 baht but that was a cheap price to see the markets my way without stopping at every souvenir shop along the way.

The two main areas of the floating market were indeed made up of many trinket shops but there were still great photos to be had of the merchants selling from their boats. I’m told that if you can get onto the klongs (canals) before 8am then you will have the best scenery to shoot as that’s when the locals are actually paddling around selling to each other and there aren’t many tourists around. By 9am the klongs surrounding the markets are heaving with full boats of tourists and you can get quite jostled around by the boats hitting one another in the crowded lanes.

Once through the market areas We stopped for some coconut soup before heading into the residential area of the canals which were beautiful. You can see the floating market’s impact on the surrounding area by the new houses being built, some of them are very nice. All the houses had many flowers planted and the owners seemed very proud. Of course there were some real shacks as well with trash strewn everywhere but they were few and far between.

We then went to the Wat at the end of one canal. The Wat itself was very beautiful but certain areas looked like they needed to be fixed up. I spent over an hour at the Wat complex and was surprised that I was alone the whole time, not one other tourist was to be seen.

All in all it was a great trip for me because I knew what I was in store for. If you find yourself wanting to visit Damnoen Saduak floating market keep in mind a few things. Getting there early is key to getting the best pictures of the market. Plan beforehand how you will be getting to the market, whether it be by hotel tour or taking a taxi ride. The powerboats are expensive but the paddle boats will cost you 100-200 baht per hour. Keep in mind that you will be riding in these boats with other tourists unless you can make a deal and they also won’t go much further than the markets due to paddle power.

If you are tight on time and have many of Bangkok’s attractions to see then give the floating markets a pass because it isn’t worth missing Wat Arun or the Grand Palace. If you still have your heart set on seeing the floating market then make a day trip out of it and visit the famous rose gardens and Tiger Temple as well as they are very close.

Born and raised in Baltimore Maryland I finally set out to discover the world in 2006. South East Asia has always been a beacon for me and Thailand its crowned jewel.

I write about my experiences in Thailand as well as the cultural aspects of being a foreigner in a foreign land. My blog Thailand, Land of smiles is full of stories and thousands of photos from my journeys throughout Thailand. I blog daily about Thailand at: [http://thailandlandofsmiles.com]

Nami Island, A Taste of Nature Away from Seoul – South...