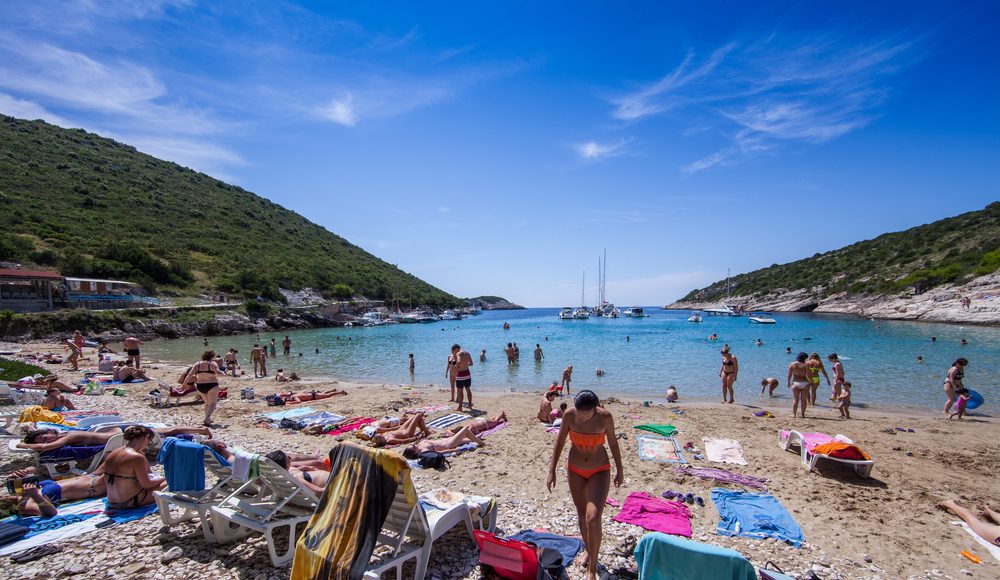 Croatia features beautiful coastlines and over a thousand stunning islands which separate each other by short distance.  Biesvo Island is one of the popular tourist destinations in Croatia.  The Porat beach is particularly well known for its natural beauty, as well as the Blue Cave for leisure yachting.  With regular ferries from Komiza during summer seasons, you need not worry about the traffic to explore the natural habitat.   (Photo credit Stjepan Tafra) 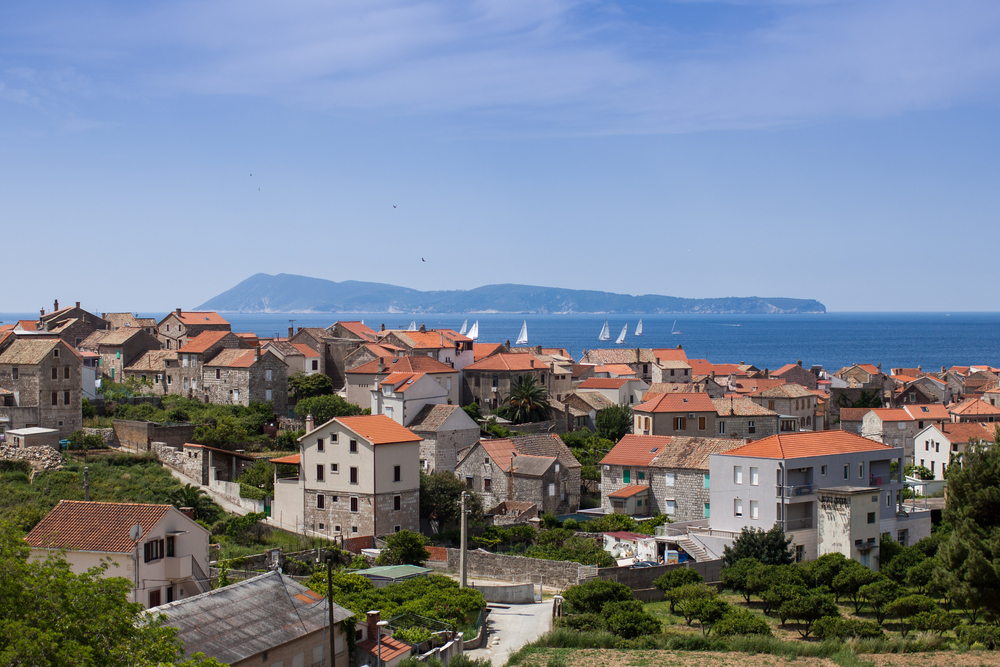 The tiny islet of Bisevo viewed from Komiza 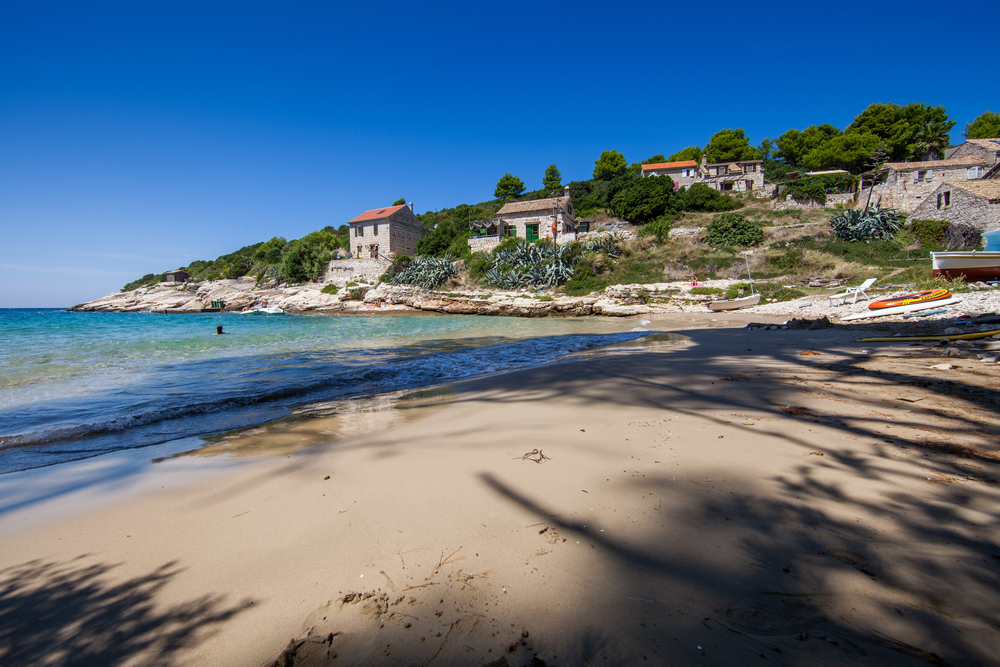 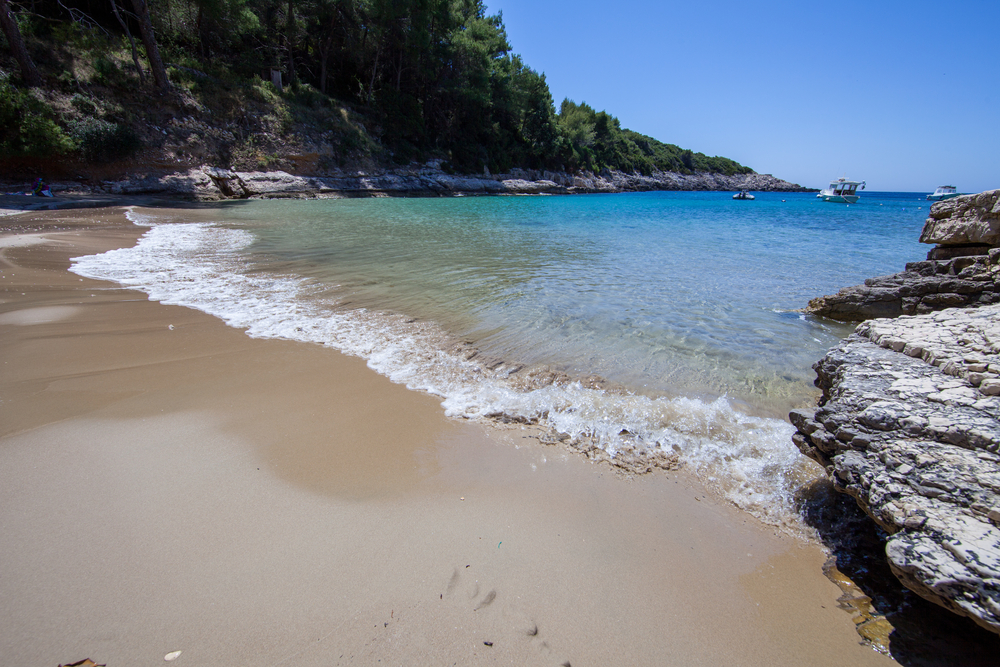 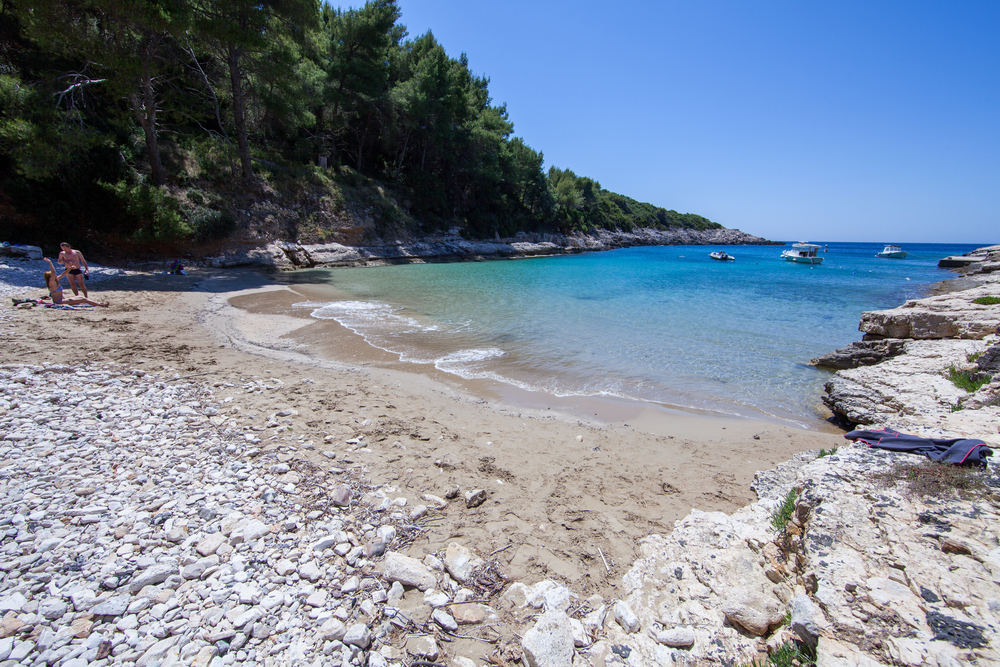 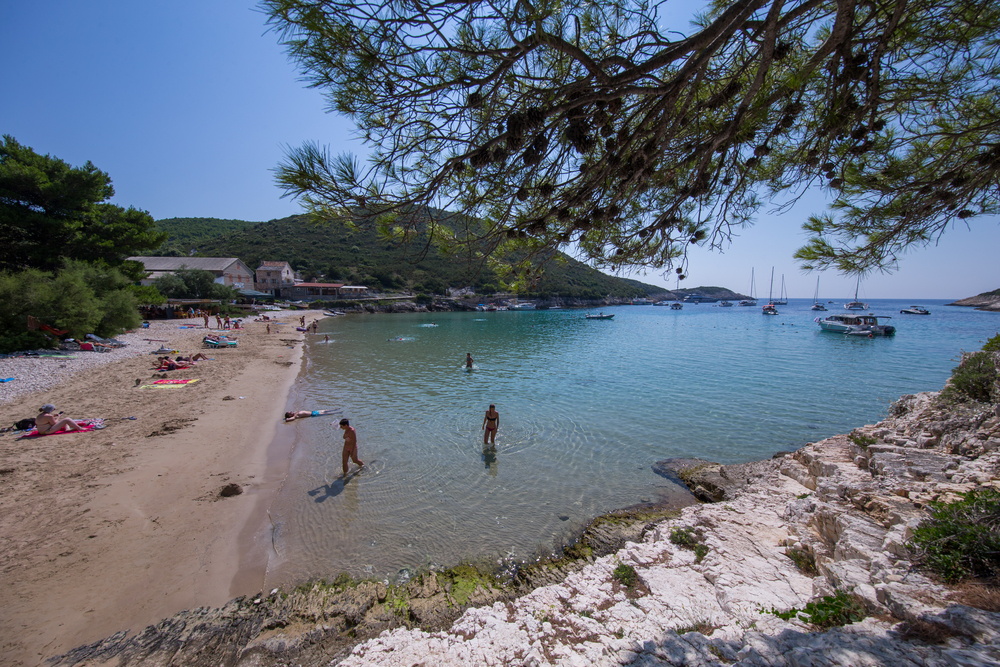 BISEVO, CROATIA – JUL 29, 2016: Porat is a sand beach located on the Bisevo Island. In 2011, The Irish Times counted it as one of the top 7 beaches in the world (in terms of natural beauty). 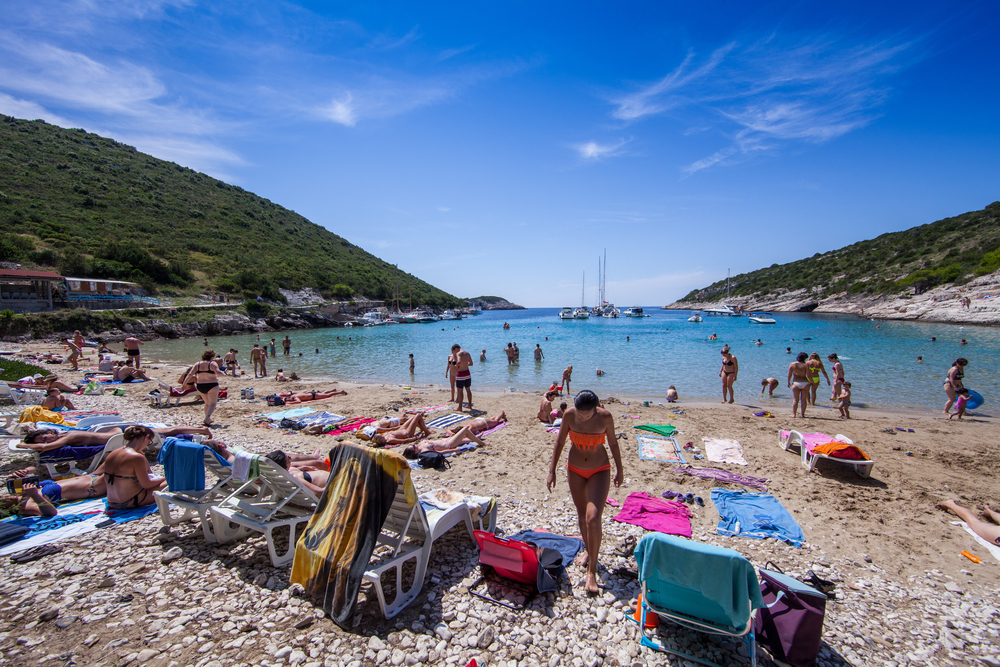 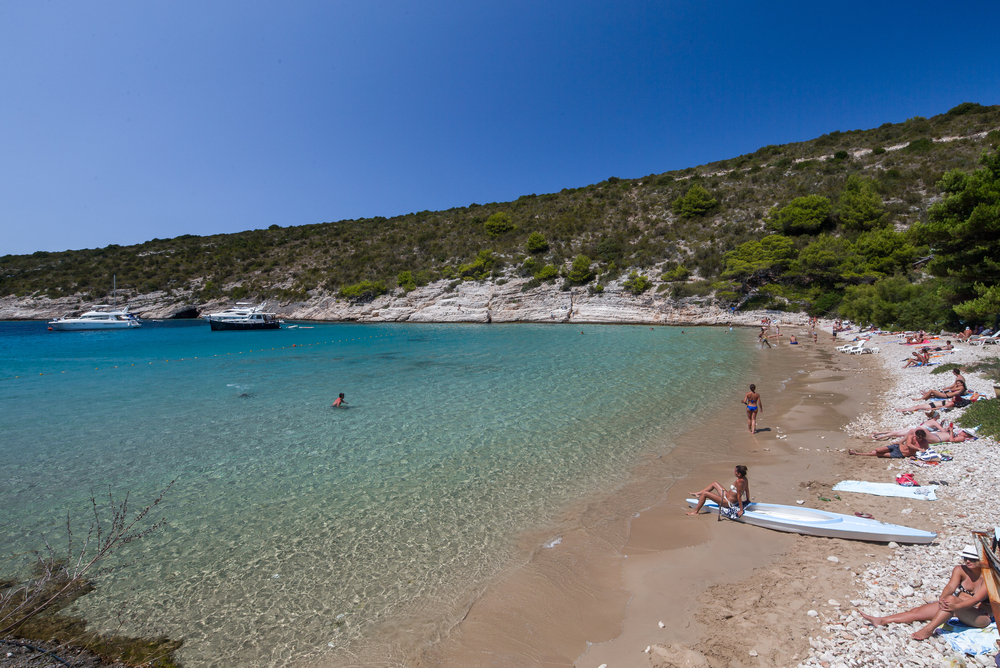 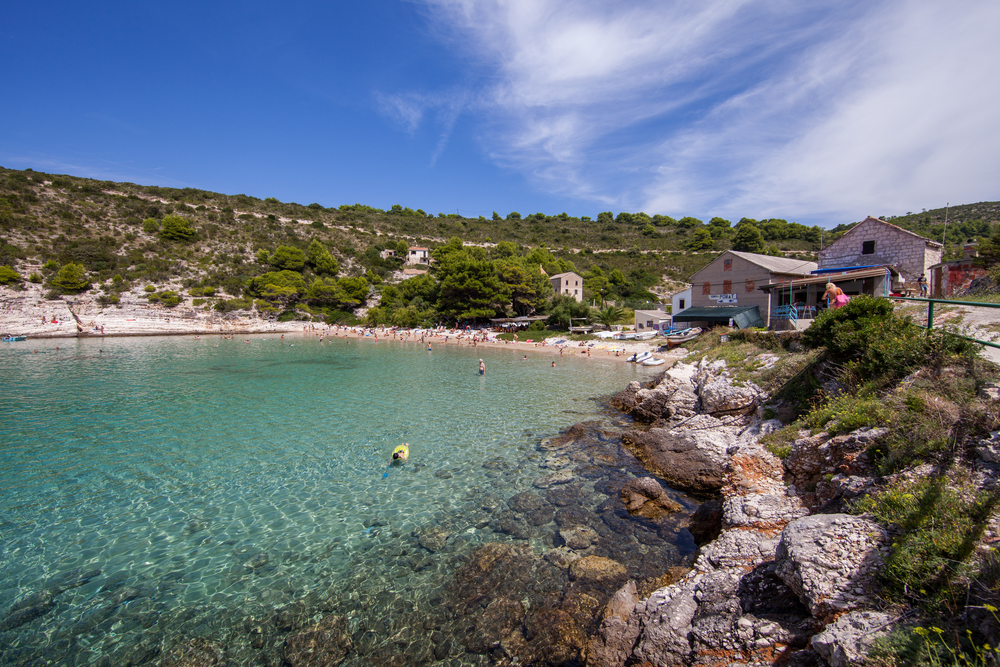 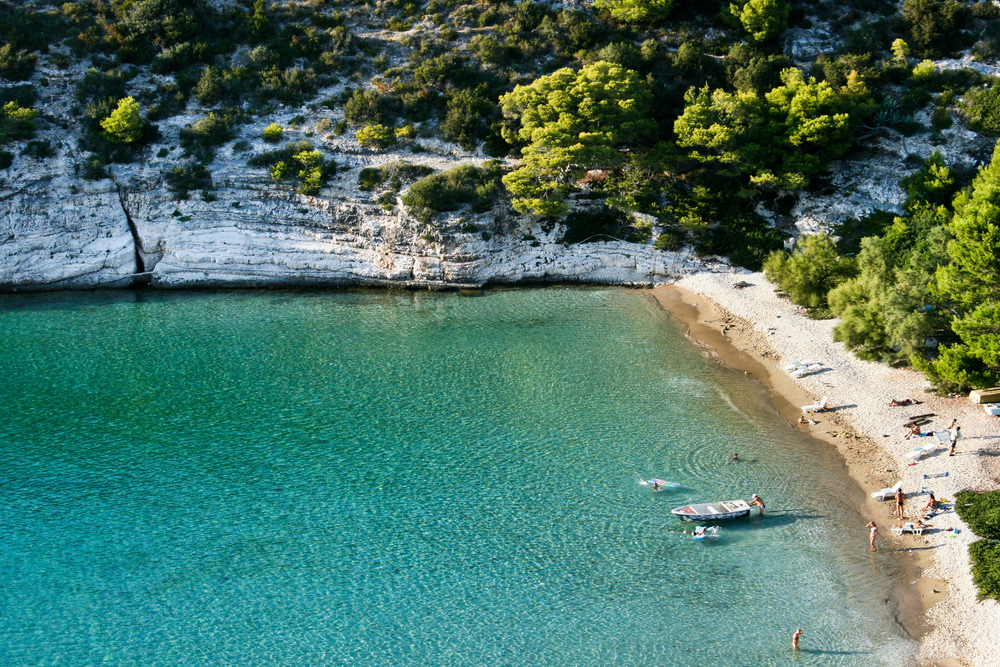 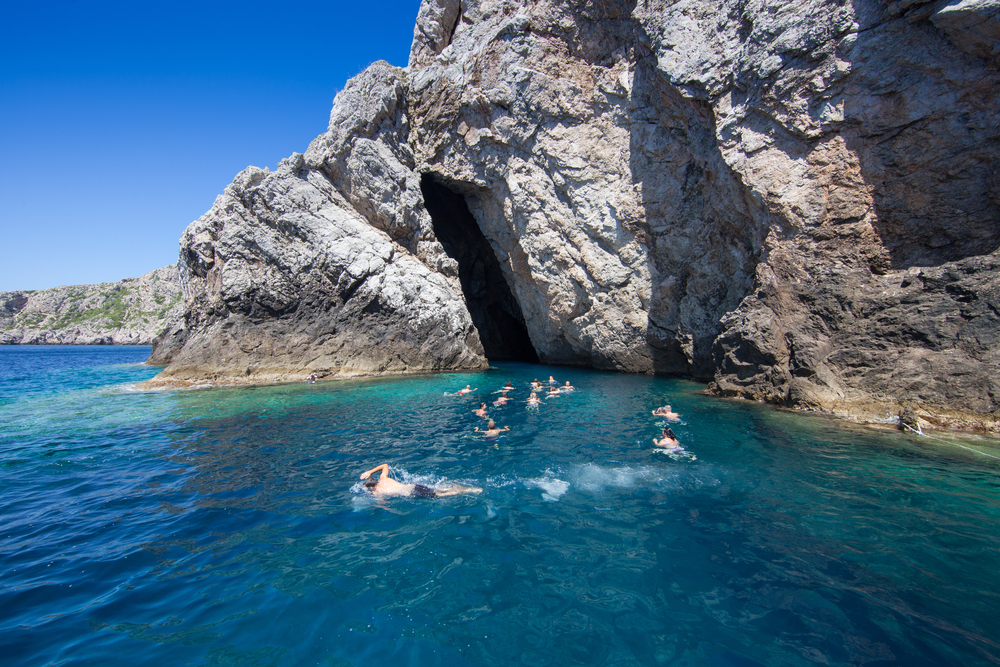 BISEVO, CROATIA – JUL 29, 2016: People swimming in front of the sensational Monk Seal Cave on the island of Bisevo in Croatia 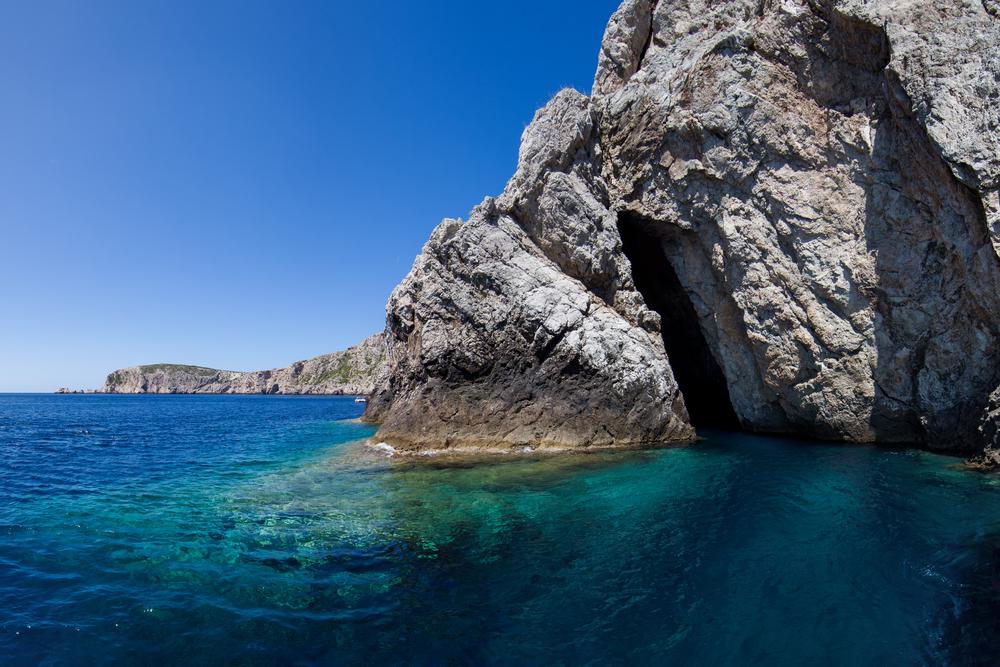 Monk Seal Cave on the island of Bisevo: its entrance is a narrow, almost thirty meters high gap in the cliff. 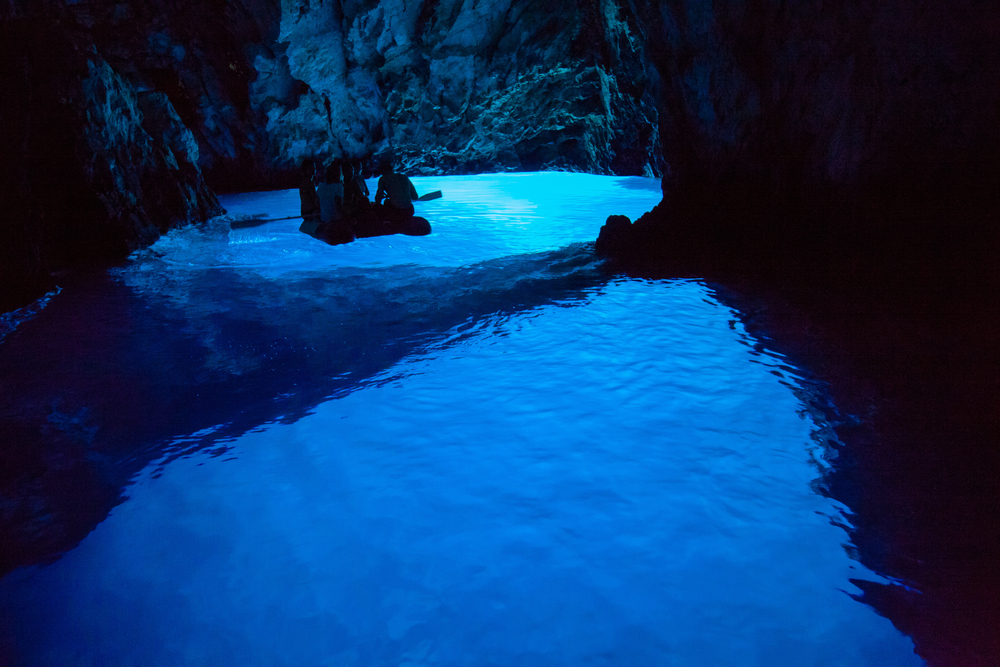 KOMIZA, CROATIA – AUG 15, 2009: The Blue Cave is one of Croatia’s natural wonders, located on the eastern side of island Bisevo. The cave receives more than 90,000 tourist visits every year 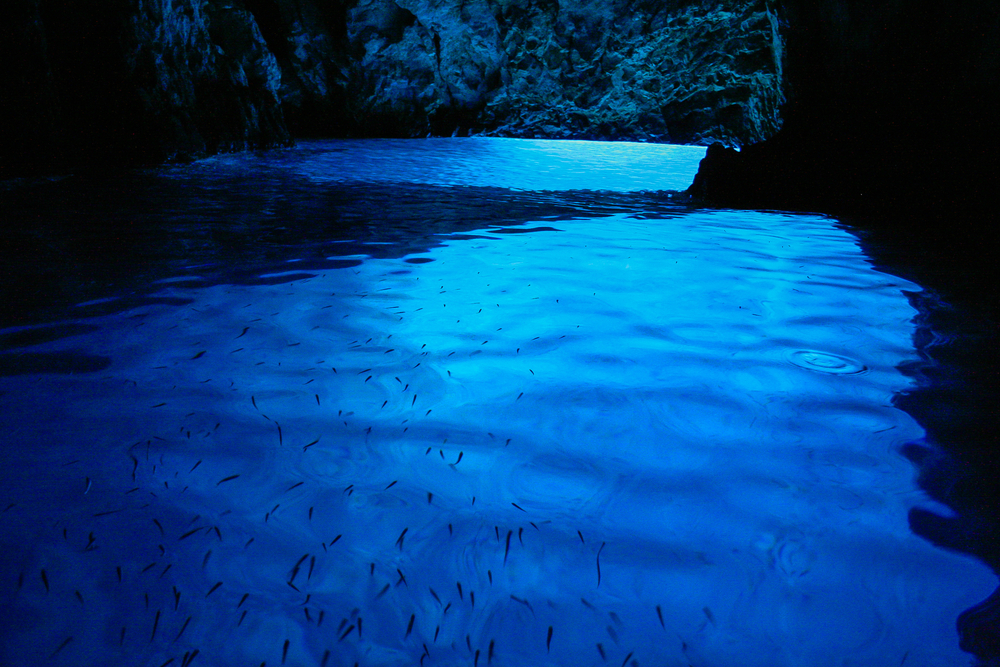 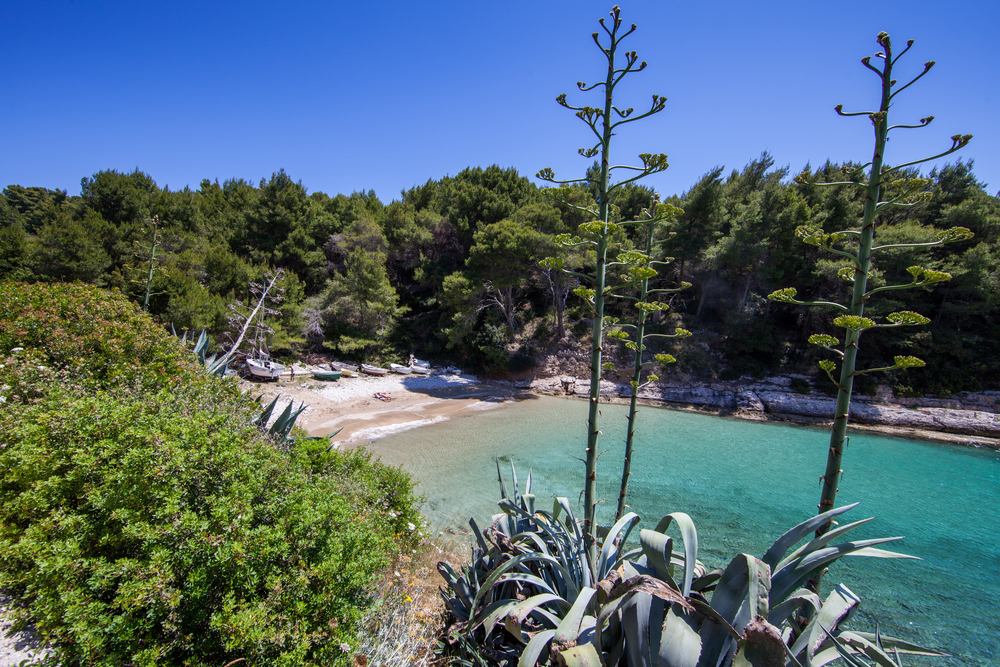 BISEVO, CROATIA – AUG 15, 2016: -Salbunara is situated in the south side of Bisevo island. It is a deep, sandy bay harbouring a few small stone houses. 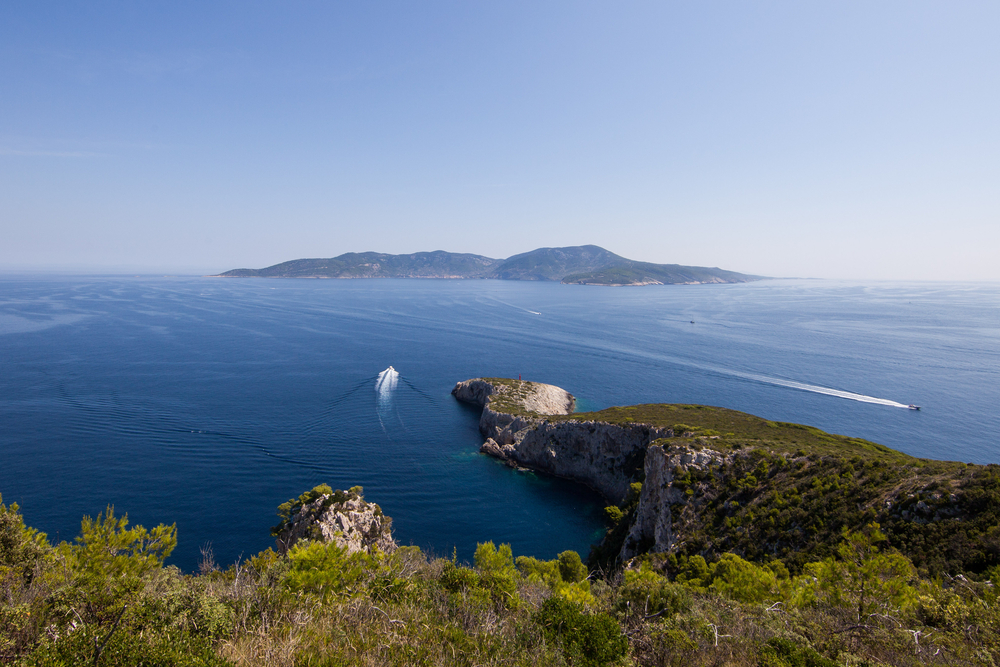 Croatia is situated on the Adriatic Sea, opposite Italy, in the Northern Mediterranean. With a history going back over a thousand years, it first appeared on the political map of Europe in 1992, following the break up of Yugoslavia after a bloody civil war.

Weather – The climate is typical of the Mediterranean and provides for pleasant holidays throughout the year. The best season for sailing in Croatia is early summer with good winds in May and June mainly from the S/SE. Mornings tend to be calm with the wind increasing later in the afternoon to around 15 – 20 knots. The months of July and August see calmer conditions which is OK for those who don’t mind motoring. Summer temperatures average between 26 to 30°C and the sea temperature in summer is about 25ºC.

Sailing Area – Starting in the north

The Brioni Islands – Formally the summer residence of President Tito, these islands were closed to the general public. Today they are open but the facilities are a bit rundown, as little money was spent on their upkeep following the death of the President. The group of islands consists of 2 larger ones and 12 smaller ones. They were given National Park status in 1983. The largest island is Veli Brijun, just is 2km from the coast. It is very green being covered with vegetation.

Cres & Losinj islands – Covering nearly 400 square km, Cres is the second largest island in the Adriatic. It is grouped with Losinj and another 28 smaller islands. The harbour of Mali Losinj is said to be the most beautiful in the entire Adriatic. Cikat bay, which is well known for its beach and good windsurfing, is the tourist centre. While the town of Veli Losinj is much quieter. Cres Town is also popular and is reminiscent of an Italian village due to the fact that for several centuries it was ruled by Venice. The island of Susak is well worth a visit. The population speak their own dialect, which is not easily understood by other Croats. And the women often dress in a colourful costume, a short, multicoloured dress, red leggings and a white blouse.

Krk is the largest island in the Adriatic, covering 405.78 square km, and is also one of the most populous islands.. It is very busy with tourists being by bridge to the mainland. It is not the most beautiful or the greenest of the islands. The main towns are Baska, Krk town itself, Malinska, Omisalj, Punat and Vrbnik. Krk Town is famous for the Cathedral of St. Mary.

Rab island is one of the greenest islands in the Adriatic and probably one of the most magical. It is has beautiful sandy beaches and is covered with pine forests. Rab Town, the main resort, is full of medieval buildings, built under Venetian rule in the 13th century. The old town walls are still visible in some places.

Pag is the second longest island in the Adriatic. It has little in the way of vegetation due to strong wind of Bora. In spite of this Pag has a lot of charm. It is well known for its lace making and the Pag Town is beautifully preserved.

Primosten, on the coast, is one of the most popular resorts on the Adriatic coast and boasts the best of Croatia from yesterday, stroll the narrow, cobbled streets of the old town centre set on a small, hilly peninsula and today, the Hacienda all night disco is just a 10 minute taxi away.

The Kornati islands – 140 islands make up this archipelago and it covers an area 300 square km. The majority of the area is a National Park, designated so because of it’s numerous coves and crystal clear blue waters. It was described by astronauts as having the bluest water on earth seen from space .It is truly beautiful. George Bernard Shaw said of the island group “On the last day of Creation God desired to crown His work, and thus created the Kornati islands out of tears, stars and breath.” Most of the area belongs to the people of Murter island who come to look after the olive groves, vineyards and orchards. They in stay cottages during the agricultural season but there is no permanent population. Hramina is a private marina on Murter Island with good facilities including a choice of restaurants.

Dugi Otok is home to the large, beautiful bay at Telescica. The small fishing town of Sali here is famous for summer events celebrating local folklore with a fun donkey race and a procession of illuminated boats. Brbinj higher up on Dugi Otok is a quiet, sheltered stop surrounded by pine woods and olive groves.

The city of Split is a UNESCO world heritage site famous for the Palace of the Emperor Diocletian.

Visit Skradin on the mainland and venture up-river to the famous waterfalls at Krka.

Brac is the largest island in Central Dalmatia and the third largest in the Adriatic. It is also one of the sunniest with 2,700 hours per year. Brac is renowned for its agricultural products, figs, olive oil, nectarines, wine and other fruits. However the main export is the famous Brac stone from which many buildings in the world have been constructed, including the home to the presidents of the United States of America, The White House in Washington DC Bol is said to have the most beautiful beach in the Adriatic. Other resorts include the Golden Horn (Zlatni Rat), Milna, Sumartin, Supetar and Sutivan.

Hvar is the fourth largest island in the Adriatic and is even sunnier than Brac. There is however enough rain to keep the island green and to maintain the beautiful fields of lavender, marjoram, rosemary, sage and thyme together with the vineyards. In the spring Hvar smells like a herbalist shop. The lavender oil is the island’s major export. The main resorts are Hvar Town, Jelsa, Stari Grad, Sucuraj and Vrboska. Hvar boasts the country’s oldest public theatre dating from 1612.

Vis – At 24 miles from the mainland this is the most westerly of the larger Croatian islands. Vis is the oldest established town in Dalmatia founded in 397 BC. The island was major base for British troops during World War II. After 1945 it was closed to the public the Yugoslav military and reopened in 1990. Some of Croatia’s finest wines are produced there, such as Plavac and Vugava. The two main towns are Vis Town and Komiza. Vis is especially peaceful and relaxing.

Korcula is known for its dense forest. Marco Polo, the famous adventurer, was born on Korcula, and his house still there. Korcula known as “Little Dubrovnik”, Vela Luka and Lumbarda are the main resorts.

On the mainland, Ston, is one of the most beautiful fortified towns you are ever likely to see. It is famous for its many cultural monuments and impressive defensive walls. The local restaurants serve delicious dishes of oyster and other fresh seafood. Spend the afternoon on it’s sandy beach lined with olive trees.

Mljet is 23 miles west of Dubrovnik and is the southern most of the larger islands. The western half of the island is a National Park and over two-thirds of the island is forested with. According to legend, Odysseus fell in love with the island and stayed there for seven years. You will find numerous good anchorages and sandy beaches on the southern coast, the best of which is Saplunara

The Elafit islands – Kolocep, Lopud and Sipan – In ancient times these islands were home to a large deer population and take their name from the Greek word elafos, meaning deer. There are in fact six islands in the group and it is reputed the most skilful mariners came from here. Once again the islands are very beautiful and are a must visit. Lopud is little more than two hills which are connected by a beautiful valley. Follow the footpath through to the bay called Sunj, a round white sand beach perfect for a swim.

Food and Wine – Croatian cooking is typically Mediterranean with fish, shellfish, fresh vegetables and olive oil taking centre stage. Varieties of fish include dog’s tooth, gilthead, grouper, mackerel, sardines and sea bass. You will find cuttlefish, octopus and squid, lobsters, mussels, oysters and shrimps. These are presented grilled or in stews and risottos. The local smoked ham is very good. Lamb is also highly regarded, especially baked on an open fire. There are some interesting local dishes, some found on individual islands, to be sought out or avoided. Take Vitalec as an example – lamb’s offal wrapped in lamb gut and spike-roasted, not everbodys idea of culinary heaven. Regions with a plentiful supply of fresh water, the Neretva valley, Trilj and the Cetina basin, are well for their frog, eel and river crab dishes. Pag and Dubrovnik produce high quality sheep’s cheese. Pag’s is known as Paski-Sir, a hard, distinctively flavoured cheese. The unique flavour comes from the method of rubbing the cheese with olive oil and ash before leaving it to mature; in addition, the sheep eat a diet that includes many wild herbs such as sage. Dalmatian desserts are good too. The most usual ingredients include almonds, eggs, honey, local fruit, dried figs and raisins. Try Orehnjaca, a sweet bread with walnuts or poppy seeds. Palacinke are pancakes usually served with jam or chocolate. Dalmatian wines have been regarded highly since ancient times. Famous wines include Babic from Primosten, Dingac and Postup from the Peljesac Peninsula and Plancic from the island of Hvar. There are also good local brandies and liqueurs

Follow this link for more info on Croatia Yacht Charters.