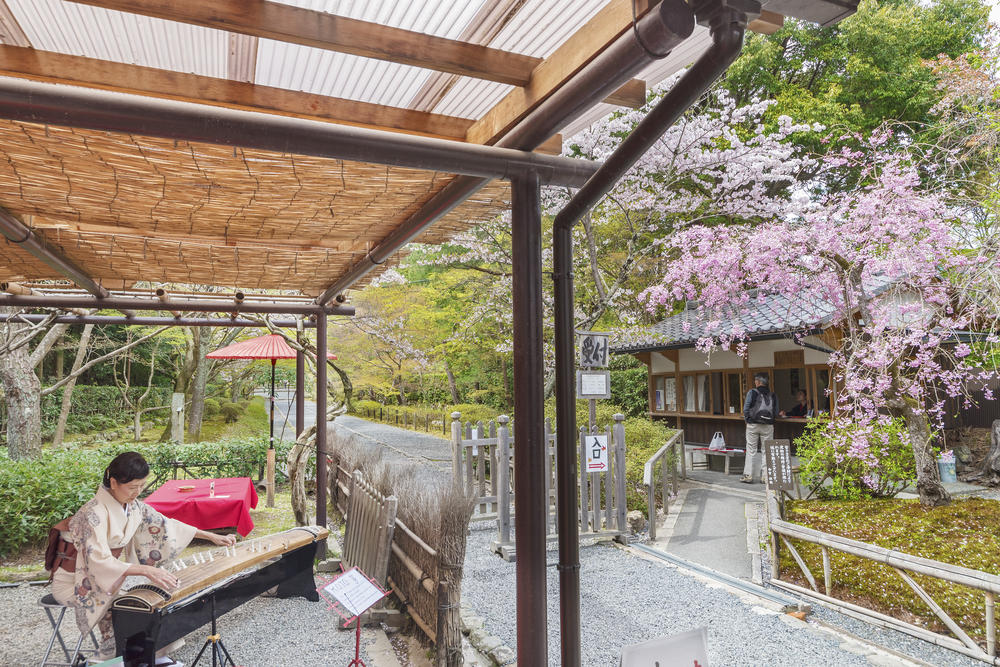 Arashiyama is situated in the western end of Kyoto, tucked along the base of the Arashiyama Mountains (which translate to “Storm Mountains”).  It is rather remote from the center of Kyoto: no matter you go by train, bus, bicycle or taxi, a 30-minute trip is generally required.  Yet , it’s worthwhile for the number of great sights there.  In fact, Arashiyama is a nationally designated Historic Site and Place of Scenic Beauty. (photos by Lee Yiu Tung) 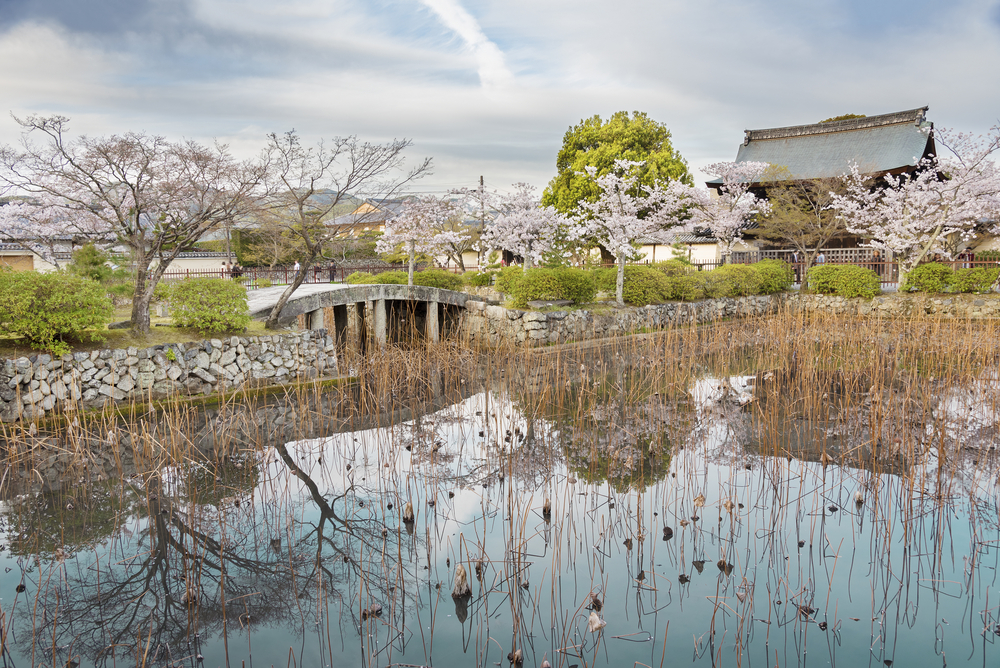 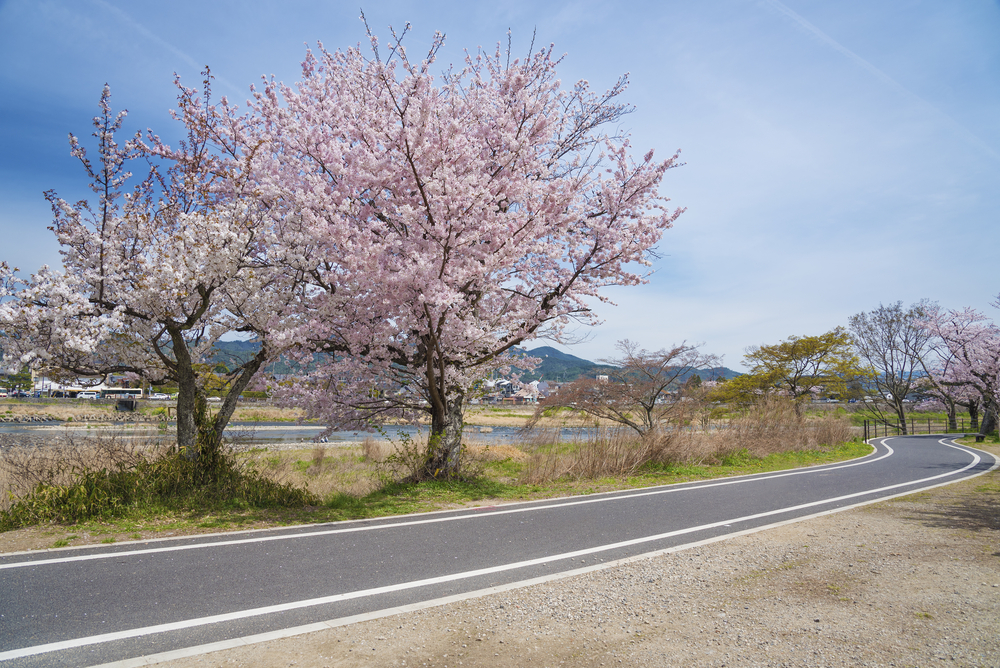 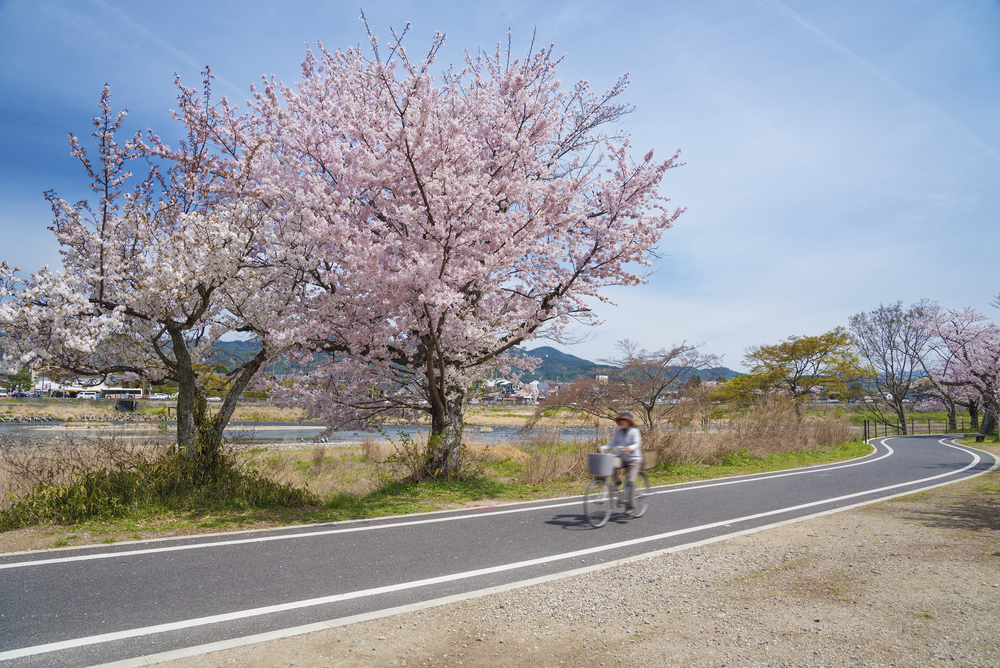 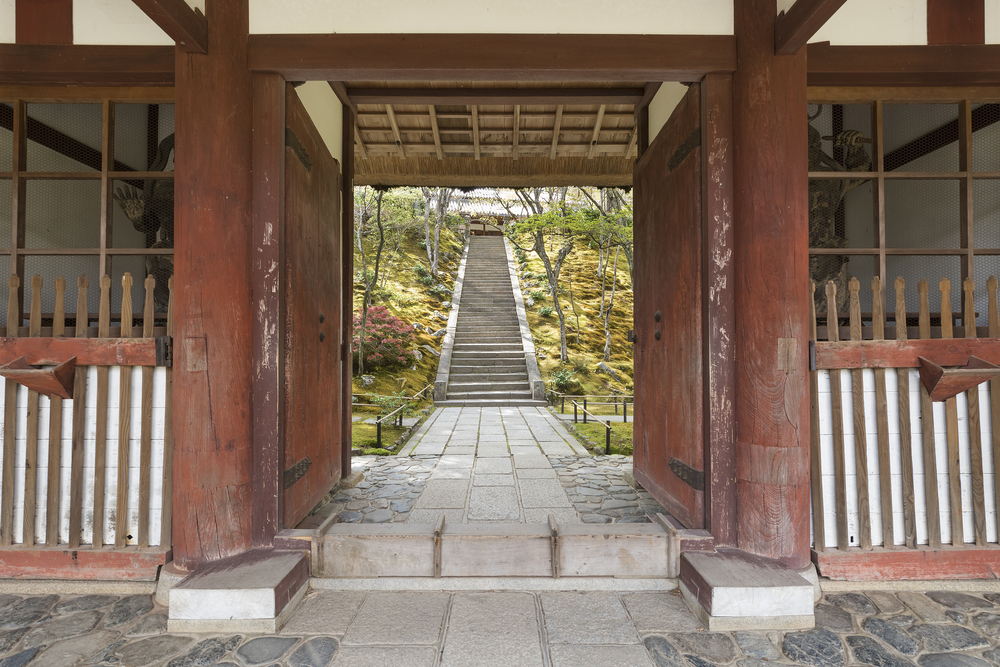 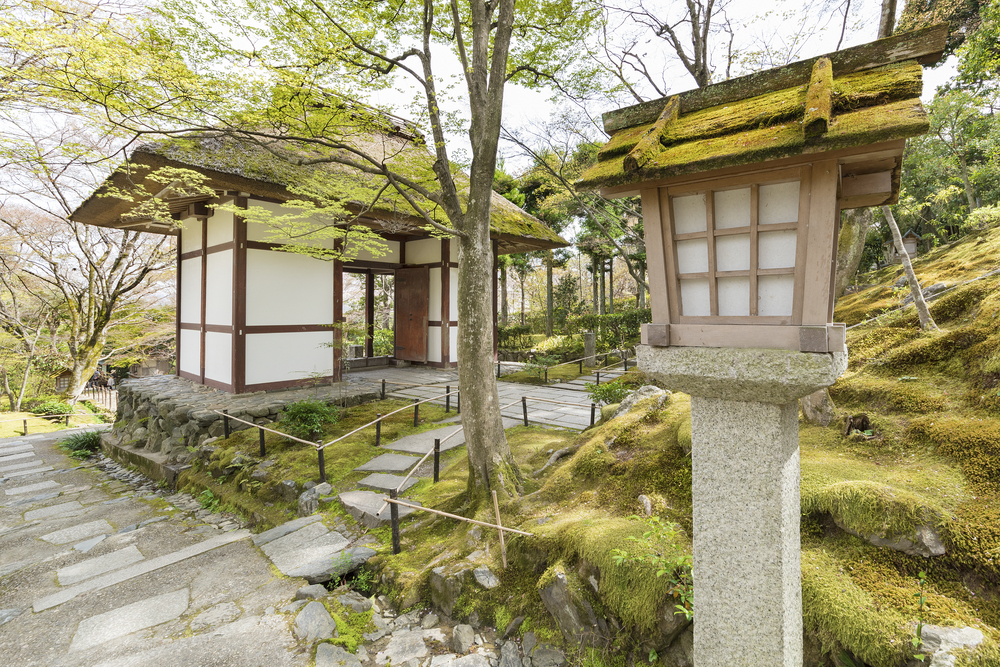 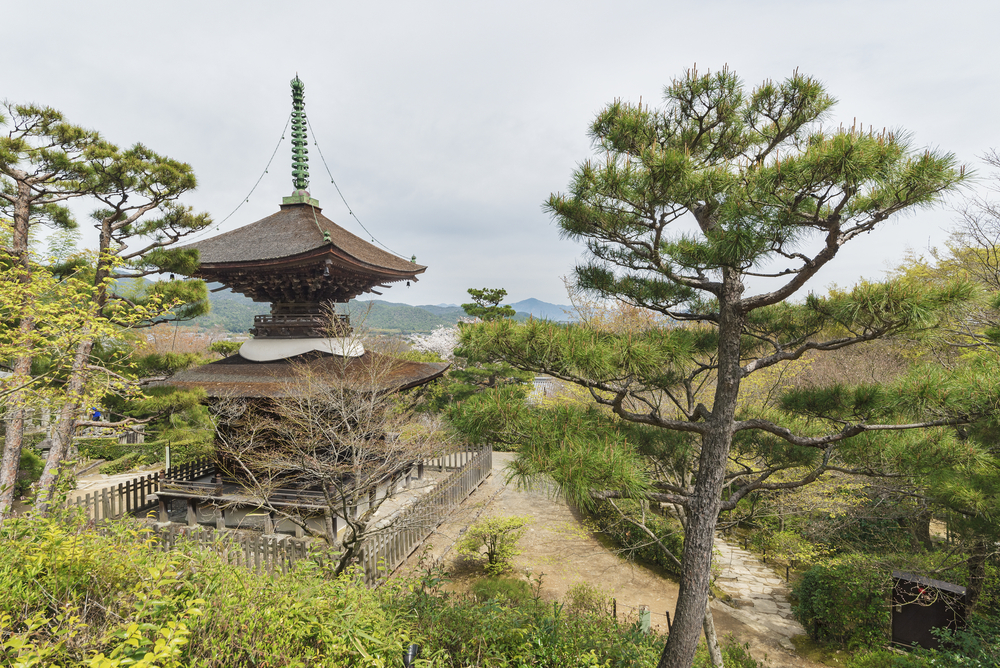 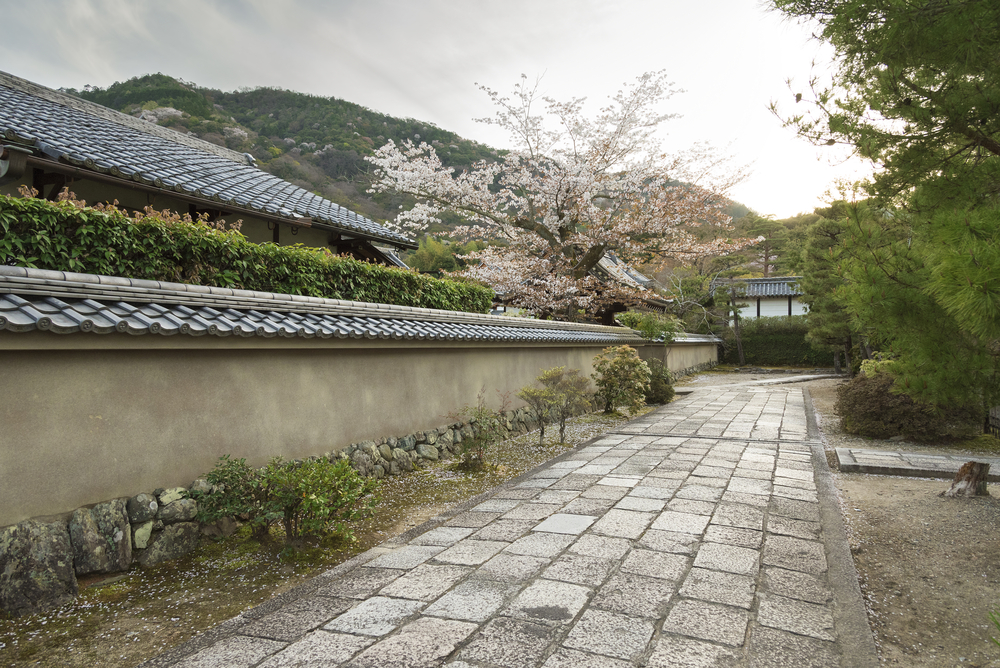 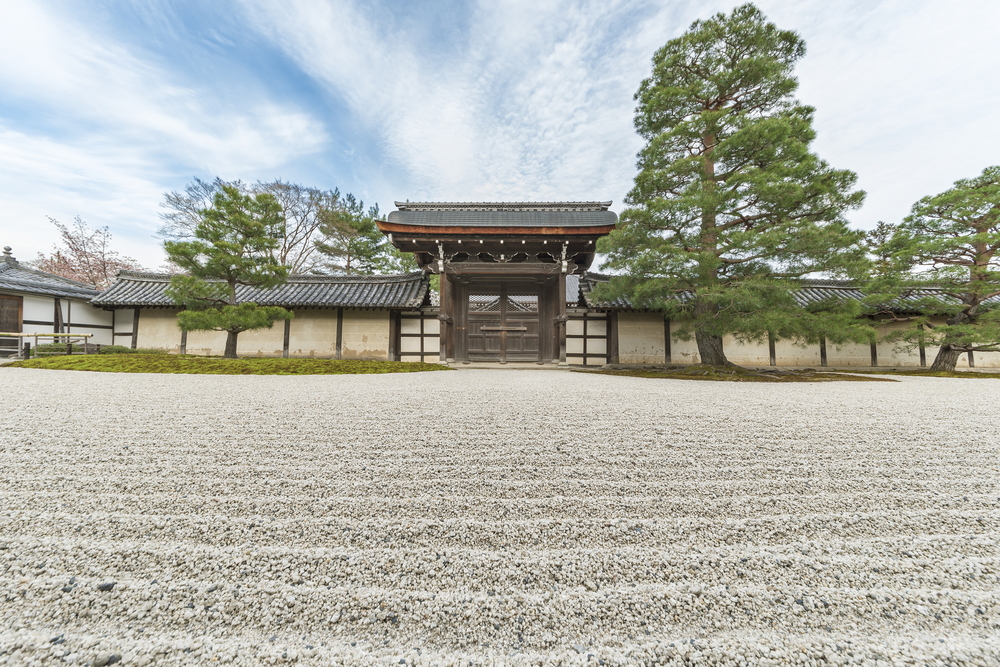 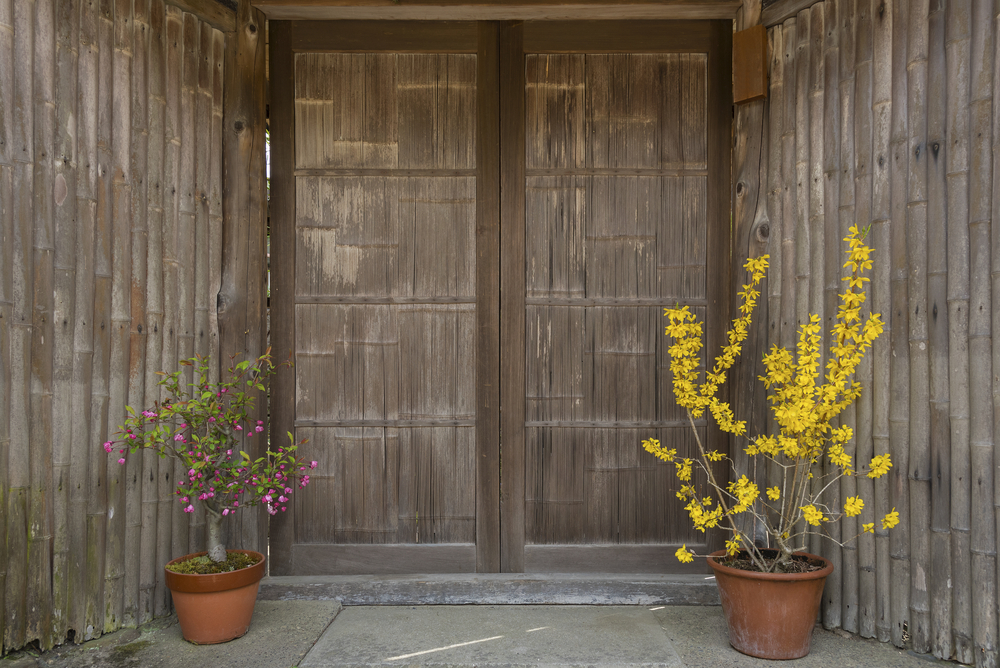 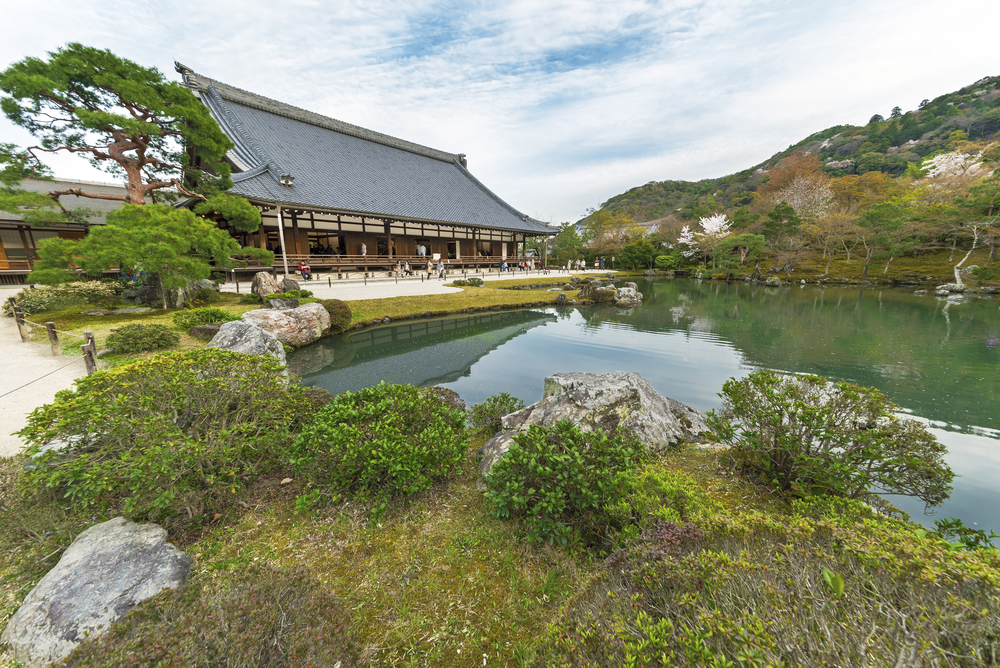 Garden with pond in front of Tenryu-ji Temple at Arashiyama, Kyoto, Japan 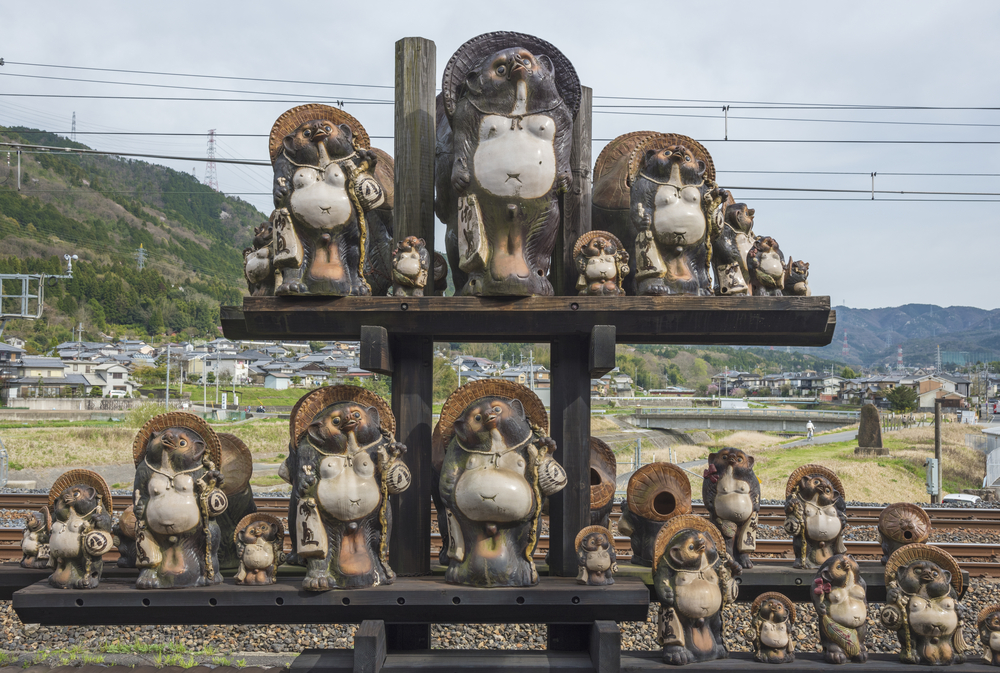 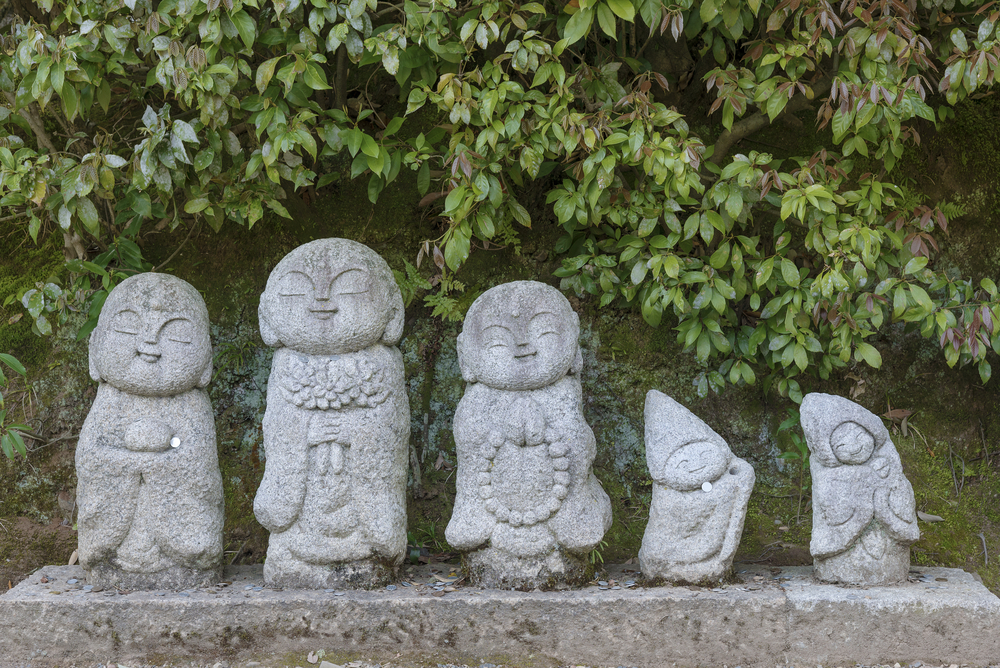 Japanese Jizo sculpture on a roadside in Arashiyama, Japan. 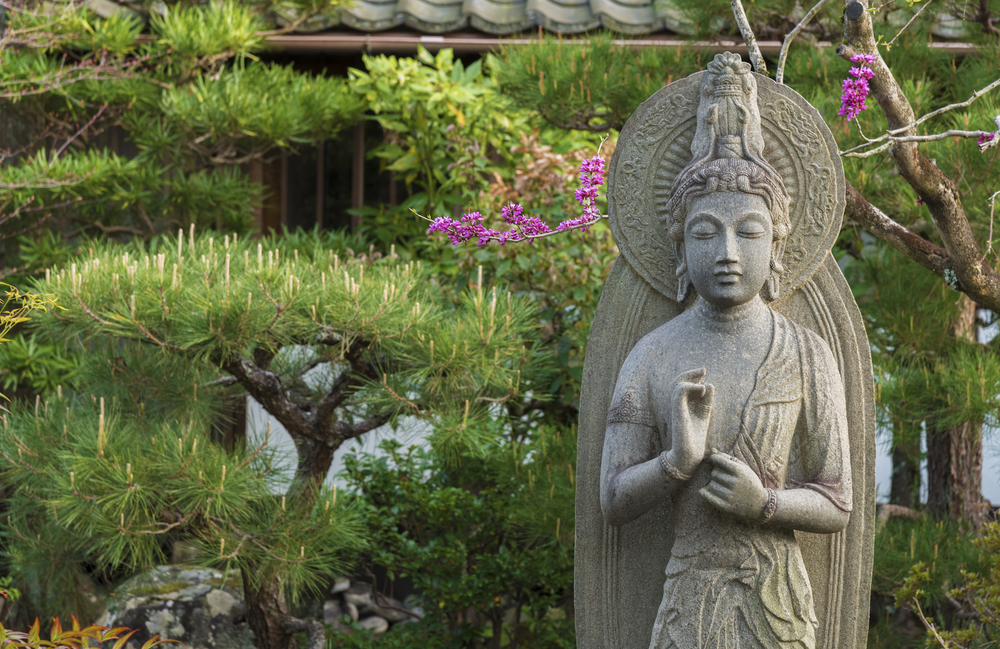 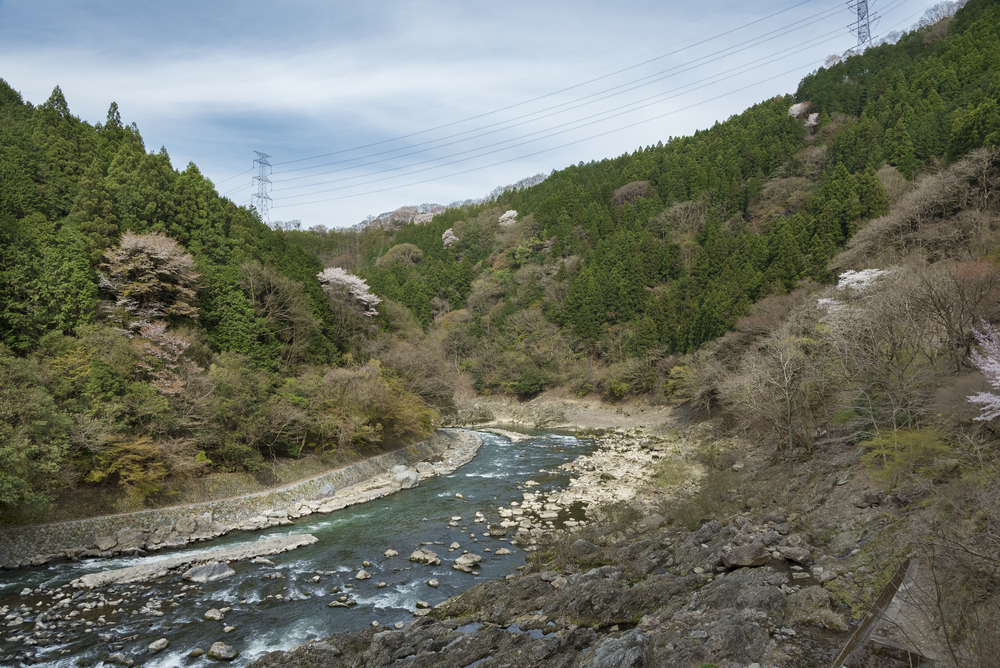 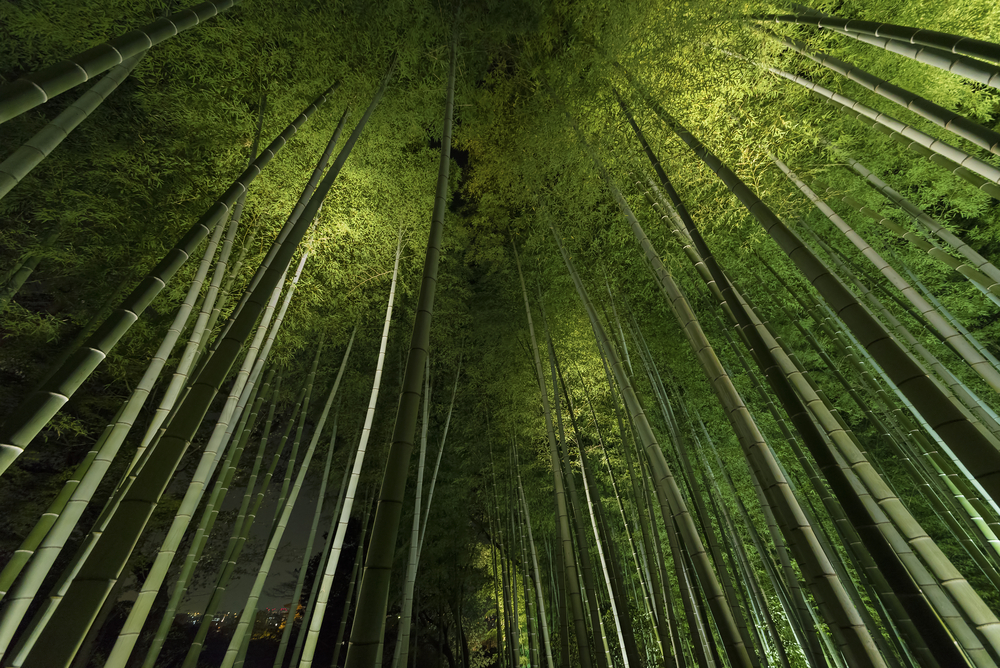 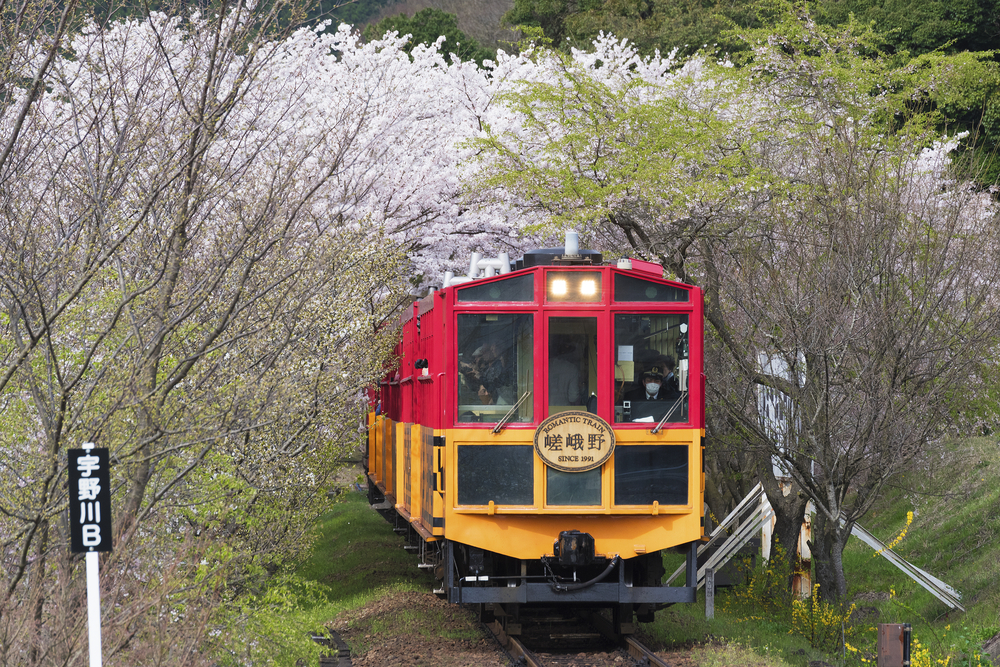 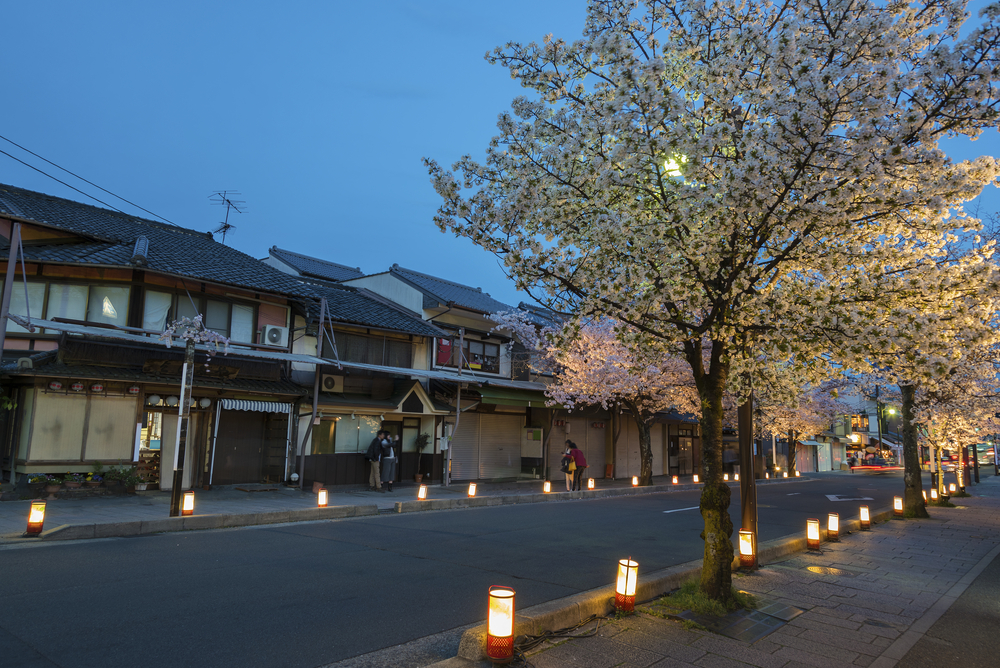 The Magic of Kyoto
By Jim Sherard

Japan. The name evokes images of cherry blossoms and temples, of Samurai and Kimono clad Geisha. The contemporary Japan of today is a diverse conglomeration of history and tradition merging with a future that often struggles to understand itself. A country vibrantly alive and awaiting the traveler who seeks to experience a culture replete with skyscrapers and bullet trains, of castles and paddy fields lined with rustic wooden homes. What better place to begin your journey within this exotic land than the city of Kyoto. This extraordinarily beautiful city with its abundance of shrines, temples, palaces, gardens, and historically priceless buildings, exemplifies the essence of Japanese culture and history. With over 2,000 Buddhist temples and Shinto shrines architecturally still intact, it is one of the best preserved cities in Japan, and a top tourist destination for foreigners and Japanese alike.

One of the most frequently visited sites is the Zen Temple of Kiyomizu. Its wooden veranda supported by hundreds of pillars located on a mountain slope overlooking the region provides an awe inspiring view of the city below. Visitors are also able to stand beneath the temple’s waterfall Otowanotaki and collect water in tin cups to quench their thirst before hiking the mountain path that leads from the structure to the tranquility of the forest above.

Two additional temples which are also popular attractions are Kinkakuji and Ginkakuji. Construction of Kinkakuji (Golden Pavilion) began in 1397 as part of a new residence for the retired shogun Ashikaga Yoshimitsu, and was converted into a Zen Sanctuary after his death in 1408. The Pavilion is covered in gold leaf, and houses sacred relics of the Buddha. Ginkakuji (Silver Pavilion) was modeled after Kinkakuji, and is located at the foot of Kyoto’s Higashiyama mountains. Built as a villa for Ahsikaga Yoshimasa, (a descendant of Yoshimitsu) the building was also converted into a Zen Shrine after his death in 1490.

Another impressive structure that is a well known tourist destination is Nijo Castle. Located on the eastern edge of a 70 acre compound, the building consists of 33 rooms, and is famous for the intricate paintings of landscapes which adorn the Palace’s sliding doors, and for the innovative construction of wooden floors that squeak like nightingales when walked upon which was employed as a security measure against intruders.

Other memorable sites in and around Kyoto include the “Philosophers Walk”, the Gion District, and Arashiyama, a charming tourist area distinguished by its landmark Togetsukyo Bridge, with Mount Arashiyama standing peacefully in the background. A wide selection of cafes, restaurants and shops are located near the famous bridge. If you venture a short distance north you’ll also come across a cluster of bamboo groves and residential district with several small temples placed placidly among the wooded hillside.

The “Philosophers Walk” refers to a scenic two kilometer path running south from Ginkakuji Temple along a meandering river to Nyakuoji Shrine, and was named after philosophy professor Kitaro Nishida, who could often be seen using the pathway. The Gion District located northwest of Kiyomizu Temple consists of flagstone paved lanes lined with traditional buildings, where if you’re lucky you may catch a glimpse of Geisha as they make their way gracefully down the cobblestone streets.